Ron Carter Trio to perform at the Israel Museum 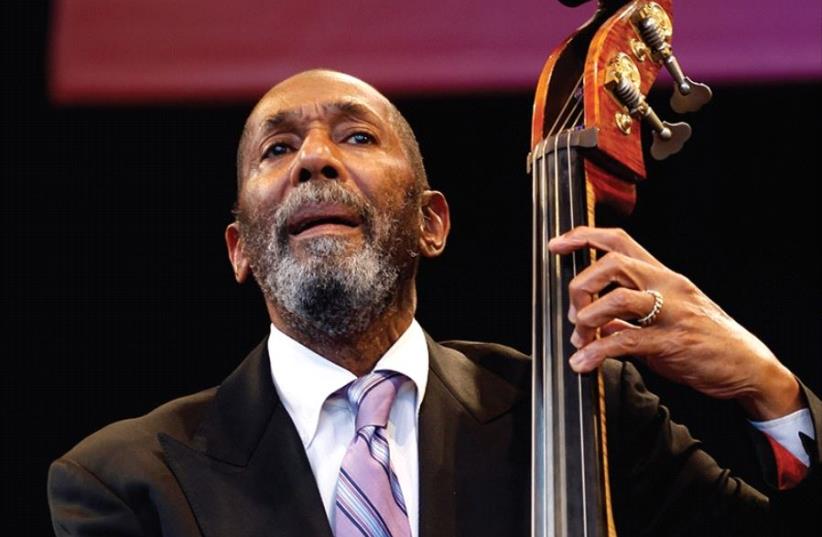 US jazz bassist Ron Carter
(photo credit: REUTERS)
Advertisement
The world of jazz is replete with all sorts of colorful characters, each with his or her own distinctive instrumental style and mode of expression. Ron Carter has been one of the art form’s standout members for more than half a century, earning across-the-board kudos for his unique sense of timing and timbre on double bass, with the occasional run on the cello.Local jazz fans will have an opportunity to catch the bassist do his inimitable thing on Thursday (8 p.m.) when he performs at the Israel Museum in Jerusalem as part of the museum’s Seeing the Sounds program of predominantly classical music slots. The musical festivities close on Saturday evening with a rendition of Gustav Mahler’s Das Lied von der Erde by the Mahler Chamber Orchestra.Carter will come here with his trio, which takes in pianist Donald Vega and guitarist Russell Malone. That’s a slightly left-field setup, although, as Carter points out, he didn’t exactly invent the bass-piano-guitar combination.“It’s not really new. [Then pianist] Nat Cole used it years ago, and [pianist] Ahmad Jamal used it when he had a group called The Three Strings in Pittsburgh, and [pianist] Oscar Peterson did it with [bassist] Ray Brown and Herb Ellis. It’s not an unheard of concept, it’s just that there aren’t a lot of people doing it right now,” he said over the phone.Carter has been caressing and plucking bass strings since the early 1960s. Most people think he started out as a member of legendary trumpeter Miles Davis’s Second Great Quintet, which worked and recorded pretty intensively from 1964 to 1968. The fivesome also included Herbie Hancock on piano, Tony Williams on drums and Wayne Shorter on saxophone. In fact, Carter had put in his evolving pennyworth, and then some, prior to his rewarding stint with Davis, with the likes of stellar pianist Randy Weston and singer Carmen McRae.“I’ve kind of gotten over that limitation on the view of my career,” says Carter, shrugging his shoulder. “I’m OK with that.”The bassist says his time with Weston left its imprint on his musical development.“He was the first big band leader I played with for more than one or two nights after I got to New York,” says Detroit-bred Carter. “I worked with him for over a year, with his big band. And there were people in the band like [baritone saxophonist] Cecil Payne and sometimes [trumpeter] Ray Copeland.”That, says Carter, gave him an almost direct connection with some of the jazz community’s great pioneers.“It was a wonderful experience to play with someone who was so influenced by people like Duke Ellington and Thelonious Monk,” he says.The bass player also learned a thing or two about being out on the road for long stretches.“It was a bit of a steep learning curve,” he admits, “but I was okay with that. We [jazz artists] look at ourselves as survivors.”Considering Carter’s output over the last 55 or so years, that is quite an understatement. As of September 15, 2015, he was officially recognized by Guinness World Records as the most recorded jazz bassist in history with, at the time, 2,221 individual recording credits. The 80-year-old musician has more than 40 titles to his name as leader, beginning with his 1961 offering Where? to his most recent album, My Personal Songbook, which came out in 2015. He has also played with a whole host of jazz big guns over the years, such as Brazilian composer-pianist Antonio Carlos Jobim, trumpeter Chet Baker and pianists Horace Silver and Andrew Hill, with Israeli saxophonist and Red Sea Jazz Festival artistic director Eli Degobri benefiting from Carter’s cultured tones on his 2010 release Israeli Song.Even after all these years of improvisational derring-do and all the experience he has accrued in recording studios and at festivals and other venues across the globe, Carter says he is always happy to be taken unawares.“I am surprised by other musicians. That’s why I play with them,” he exclaims. “Every day I’m going to school, man. I play with all kinds of bands the whole time, and it’s like going to class every time with these guys.”The latter include veteran drummer Lenny White, Vega, Malone and trumpeter Wallace Roney.“What I like about these guys is that they understand that I’m also a student with them. And students always exchange information, and we’re all trying to solve issues. That’s great for me,” he says.Ask any jazz fan the first epithet that springs to mind when they think of Ron Carter, and more than likely it will be “elegant.” That applies to his seemingly effortless playing style, as well as his sartorial appearance on stage.As we took our telephone leave, Carter asked if I would be at the Jerusalem gig. When I said yes, he invited me to come up and say hello. Naturally, I said I’d be happy to. Then he humorously told me how to recognize him: “I’ll be the guy wearing the best tie there,” he laughed.Musical and visual elegance personified.Ron Carter and his trio will perform on Thursday at 8 p.m. at the Israel Museum in Jerusalem. For tickets and more information: http://www.imj.org.il