The mother, who converted to Judaism and made aliya in 2006, appeared to characterize Israel as a war zone, stating that she had had enough of rocket attacks while living in Ashkelon. 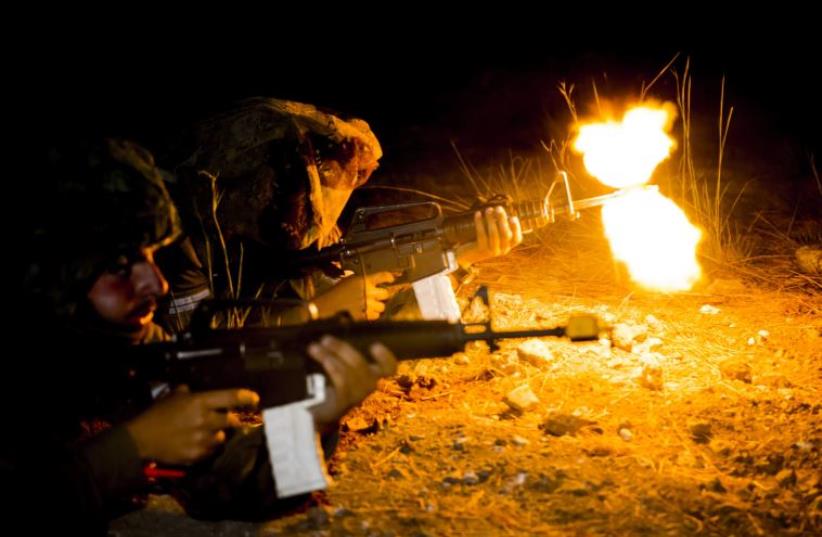 IDF combat troops take part in intense drills
(photo credit: IDF SPOKESPERSON'S UNIT)
Advertisement
A South African Jewish woman in the midst of divorce proceedings is petitioning to prevent her children from returning to Israel with her husband, claiming that travel to the Jewish state would endanger them, according to local media.The Herald reported on Wednesday that the couple, who lives in Israel, split during a vacation in South Africa to visit the wife’s parents. The woman, who converted to Judaism and married an Israeli man in 2006, appeared to characterize Israel as a war zone, stating that she had had enough of rocket attacks while living in Ashkelon. Neither party’s name was included in media reports.The father responded by accusing the mother of essentially kidnapping their three children, the oldest of whom is eight years old, and asserted that the South African courts did not have jurisdiction over either their divorce or resultant custody issues.“Over the past several years, there have been numerous cases of parental kidnapping of children from Israel where the parent wrongfully retaining the children had claimed that due to the security situation in Israel, returning the children there would expose them to grave risk of harm. Courts in several countries have refused to accept such a claim and have ordered the return of the children to Israel,” Israeli Justice Ministry official Galit Greenberg wrote in a court filing on behalf of the father, according to The Herald.The South African newspaper quoted the mother as saying that “everybody, including children, has to run to underground shelters and hide there on a regular basis.”Since the withdrawal from Gaza in 2005, more than 11,000 rockets have been fired into Israel from the coastal territory.Asked about the case, a spokesman for the Justice Ministry told The Jerusalem Post that he could not comment on the specific case due to privacy considerations, but said that Israel is not a party to the dispute.However, he added that “in general, in appropriate cases” the ministry’s international affairs office will, “as part of its role in the central issue of restoring abducted children,” address relevant authorities in other countries to push for a resolution to custody issues in Israel.“The decision whether to return a child or not is a decision of a court in the country where the child is abducted,” he said.The South African Jewish Board of Deputies declined to comment.