Santana wows Israel with masterful guitar and message of peace

The Latin rock legend Carlos Santana shared his soulful music with a crowd of nearly 50,000 Saturday night at HaYarkon Park in Tel-Aviv. 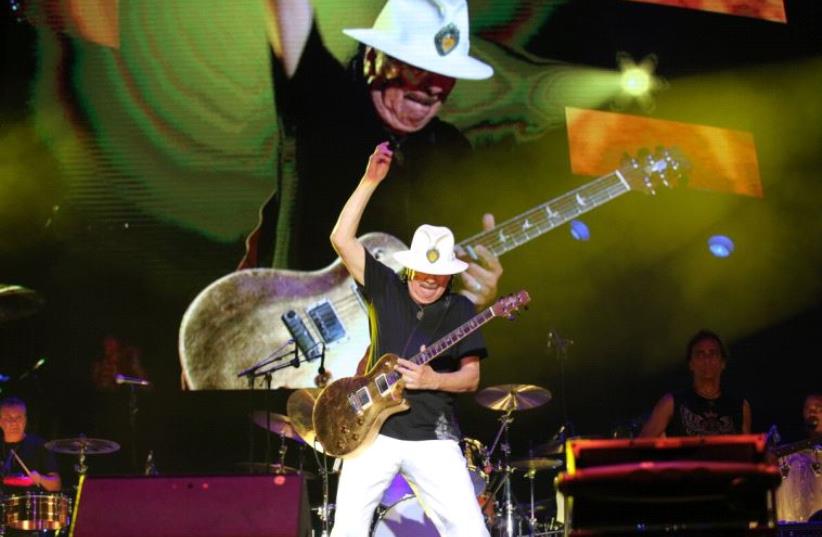 Santana performs to 50,000 in Tel Aviv
(photo credit: BERNARD ELLOUK)
Advertisement
In a mix of English, Spanish, and masterful guitar riffs, the Latin rock legend Carlos Santana shared his soulful music with a crowd of nearly 50,000 Saturday night at HaYarkon Park in Tel-Aviv. The stage was packed with multifaceted musicians and lead singers who doubled as trumpet or tambourine players. Among the two drummers was Santana's wife, Cindy Blackman, who beamed on stage during multiple solos featuring fast-paced, energized beats that made onlookers cheer with excitement. A second guitar player, keyboardist, bass player, and conga player were also part of the ensemble, and the entire band's multi-talented vibe was accompanied by footage of Santana's original shining moment at Woodstock in 1969."Love Makes the World Go Round," featured on his latest album, "Santana IV," opened the concert with a gradual build-up, first showcasing Santana's unmistakable sound on the guitar, and then tossing the focus to the two primary singers. The interplay between each of the band's members was effortless as their leader guided them in a clear, yet periodically spontaneous manner. Santana even allowed a young boy to strum his guitar mid-song, evoking loud whistles from the crowd."It's an honor to be in your light, in your love, with so much beauty and grace," he said to the audience, right before adding, "let's make the women happy," and commencing the intro to all-time-favorite, "Maria, Maria."Other songs hailing from the time of Santana's reemergence in the 90s such as "Smooth" and "Corazon Espinado" were met with much enthusiasm, and the crowd didn't let language differences get in the way as they loudly sang along in Spanish. Santana himself began to communicate with the crowd in both English and Spanish, demonstrating his central message of the power of connection through peace and love, no matter what barriers may stand in the way. "In any language, somos una familia, we're one family," he said. "We can conquer fear in this planet. You and I, we are the architects of tomorrow. Everything that's happening in the world, in Europe and America, it's happening because we need to change."Throughout the concert, this message of change, and ultimately peace, was ever-present. Not only were Santana's songs central to making this point — each ticket notified the concert goer that 4 of the shekels he or she paid would be going to Santana's charitable Milagro Foundation, and by extension, Hand in Hand, an integrated school for Jewish and Arab children. The last song played by the band was "Let there be Peace on Earth," and just as the concert began, it gradually ended with Santana bowing on stage and humbly exiting, arms extended toward the audience. Footage of Hand in Hand classrooms, students, and teachers was projected from the screens on stage, leaving fans with a sense of who Santana is, and what he hopes the world can be.