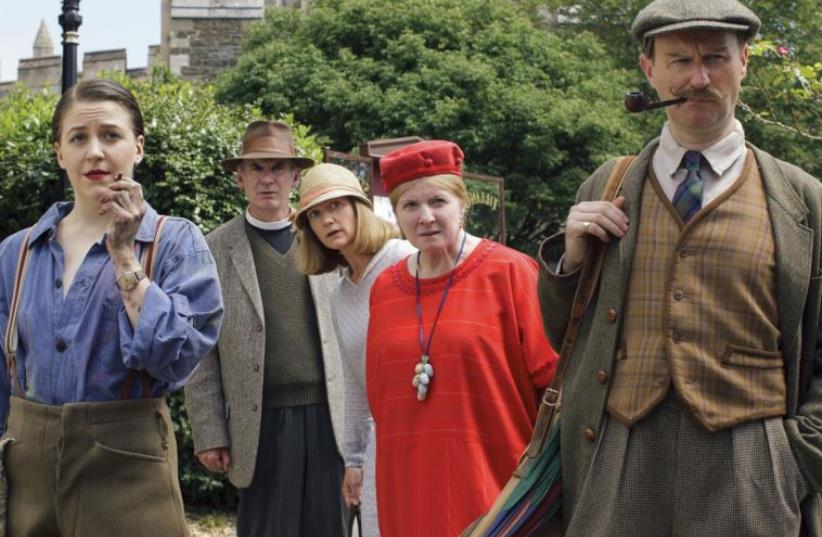 'Last Man on Earth' TV series
(photo credit: PR)
Advertisement
The series The Last Man on Earth is a silly but entertaining show that just started airing on Thursdays on YES Drama at 9:15 p.m., and all the episodes are available on YES VOD. It’s a sci-fi premise that gets a comic treatment: Everyone on Earth except for Phil (Will Forte) has died. In the first episode, Phil travels cross country in a bus searching every state in the continental US for other survivors, doesn’t find any, and goes back to his home in Tucson, Arizona. There, he spends his time drinking in a bar, surrounded by balls with faces painted on them, inspired by Tom Hanks’s famous volleyball in the film Castaway . He moves into a mansion and decorates it with memorabilia he has collected from all over the US, including the rug from the Oval Office, the ruby red slippers from the Wizard of Oz , famous paintings, and a few Oscars. He prays to find a woman left alive, but when he meets Carol (Kristen Schaal), she’s hardly the girl of his dreams. Phil decides to make the best of it and marries Carol in an improvised ceremony at her insistence. But then, when they run into a third survivor, Melissa (January Jones, who played Betty Draper on Mad Men ), he instantly falls for the gorgeous blond. Jones, who didn’t get too many comic moments in Mad Men , is funny here, even though her character is the blandest of the three.It’s typical TV comedy fare, but the end-of-the-world angle makes it a little different. The wonderful cast goes a long way toward making it work. You may not know the names Will Forte and Kristen Schaal, but you’ve seen them on 30 Rock and quite a few other series and films. Forte played Jenna’s clean-cut looking but kinky boyfriend on 30 Rock, as well as Bruce Dern’s son in the movie Nebraska . Schaal was Hazel Wassername, Liz Lemon’s sometime nemesis on the final seasons of 30 Rock . Schaal has a delightful comic presence, with a distinctive voice you may recognize from the dozens of children’s cartoons she has worked on. It’s pretty clear that in upcoming episodes, some new characters will join the cast, and it’s a little early to predict if the series will stay as strong as the first few episodes have been. The BBC miniseries Mapp & Lucia will air on Channel 1 on Tuesdays at 10 p.m., starting on August 18. This three-part series is an adaptation of Ef Benson’s comic novels about two ambitious society women who try to one-up each other to achieve social prominence in a small Sussex town in the 1930s. Miranda Richardson and Anna Chancellor star as the two unstoppable society women. Richardson has starred in dozens of television shows and movies, among them Harry Potter and the Goblet of Fire and Made in Dagenham . Chancellor appeared in The Hitchhiker’s Guide to the Galaxy and Four Weddings and a Funeral .

Broad City, another new comedy, will have its premiere soon on HOT Comedy Central on Sunday to Thursday at 10:30 p.m., starting from August 18. The show, which was adapted from a web series, stars Ilana Glazer and Abbi Jacobson as Ilana and Abbi, two young single friends in New York. The show plays like a combination of Girls and 30 Rock, as it chronicles the misadventures of these two characters. Abbi works as a cleaner at a vile health club called Soulstice but hopes to be promoted to trainer. She’s an artist, but her career seems to be permanently stalled. Ilana, the wilder and crazier of the two, has a job at a website where young people are supposed to find and recommend the best deals, but the work itself isn’t such a great deal because no one there ever gets paid on time. The two actresses have a natural rhythm together, and a lot of the situations they get into are both absurd and funny. How much you like it, however, will probably depend on how much you relate to it. The Walking Dead won’t be back for its new season until October; but Fear the Walking Dead, the series about the early days of the zombie apocalypse, will start airing in the US on August 23 and will be broadcast in Israel soon afterwards. The early buzz on the new series, which focuses on a family in Los Angeles, is good; and since it is set in Hollywood, there are a number of glamorous zombies and victims, although the main characters are schoolteachers.