Sealed with a kiss

Zou Bisou is a warm and inviting cocktail bar. 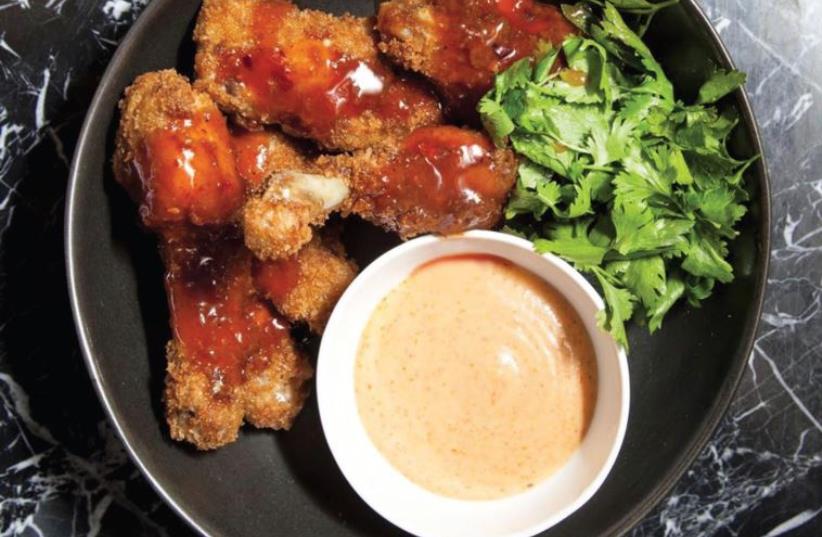 Zou Bisou restaurant
(photo credit: PR)
Advertisement
Zou Bisou has that kind of warm, welcoming atmosphere that is such a rarity in modern cocktail bars. I’ve been there a few times, and each experience is positive and unique.It goes without saying that they also mix a damn fine cocktail.Zou Bisou doesn’t seem to feel the need to impress you with bartenders with bow ties and a massive wall of every liquor imaginable. So many cocktail establishments feel cold and intimidating in this sense.Inside this 1960s New York-inspired cocktail bar and restaurant, the decor is made up of a black marble bar, vintage-style displays, stained-glass partitions, small table lamps and kissmarked napkins.The bar area is relatively small, with a laid-back feel that makes it easy to chat up a neighbor. The men and women working behind the bar are mixologist-bartender hybrids of the highest caliber. Our bartender Ben was very knowledgeable, personable and gave us great background information about each selection.We started off with some intriguing cocktails. I tried the Old Cadilllac (NIS 52), which consisted of Jack Daniels, Mezcal, Amaretto, ginger and orange zest. What a great drink! It really sent my taste buds on a trip from sweet to spicy with a nice whisky finish. If you’re a whisky drinker and want something a bit lighter/refreshing, this is a great choice.My dining partner ordered the Madison (NIS 49), which was comprised of Bacardi, Midori, reduced apples, ginger, mint and cinnamon.She was very pleased with it and especially enjoyed the caramelized apple slice on top.We began our meal with the veal tartare bruschetta (NIS 46), which was good. Actually, it was probably one of the best things we had all night. The veal, I’m guessing, did not go through a meat grinder but was painstakingly chopped by hand. The result was truly worth the effort because it simply melted in the mouth. The seasoning was mixed in already, with the exception of the quail egg resting on top for a beautiful presentation.This was followed by the Buffalo wings (NIS 28). Perfectly crisp, meaty and tender, the wings were bathed in a sauce that had the right balance of tang and spice. The Togarashi aioli was a delicious dipping accompaniment.Next up was roasted kohlrabi (NIS 24) with hame’iri cheese, shallots, chili and oregano. Like most other vegetables, when roasted in the oven the outside of the kohlrabi caramelizes, and the flavor sweetens and mellows. Paired with the hame’iri cheese, it was simply divine. I will definitely be going back for that dish.We then tried the fish and chips (NIS 48). Piping hot, the fish was fresh and the batter was light and crispy.My only complaint was that it was a little on the greasy side After another cocktail and some shots with the bartending staff, it was on to the mains. We began with the Zou Bisou burger (NIS 56), which comes with caramelized onions, cheese and bacon (we opted for without). The burger was cooked to perfection. It was flavorful and juicy, the way a good burger should be. The brioche bun was soft and tasty, and it soaked up the juices from the burger.The piece de resistance was the short ribs, aka the shpondra (NIS 52).In this special dish, the meat is slow cooked for about five hours, stewing in its own juices until it turns into a confit. The meat is then tucked in between a baked potato and dressed with sour cream. The meat was delicious and generous and simply melted in the mouth.For dessert, we opted for the New York cheesecake (NIS 34) and the hot chocolate fudge souffle (NIS 34) with peanut-caramel ice cream. The cheesecake was disappointingly bland with a poor texture. However, the souffle was wonderful – warm and delicious and truly enjoyable. Not overly rich, it had a perfect flavor and texture Zou Bisou is a cool oasis and hopefully will continue to be so for years to come. Go there for a relaxed night in the company of a few friends looking for a great time.

The writer was a guest of the restaurant.Zou Bisou
Not kosher
186 Ben-Yehuda, Tel Aviv
Tel: 054-388-0000
Advertisement
Subscribe for our daily newsletter