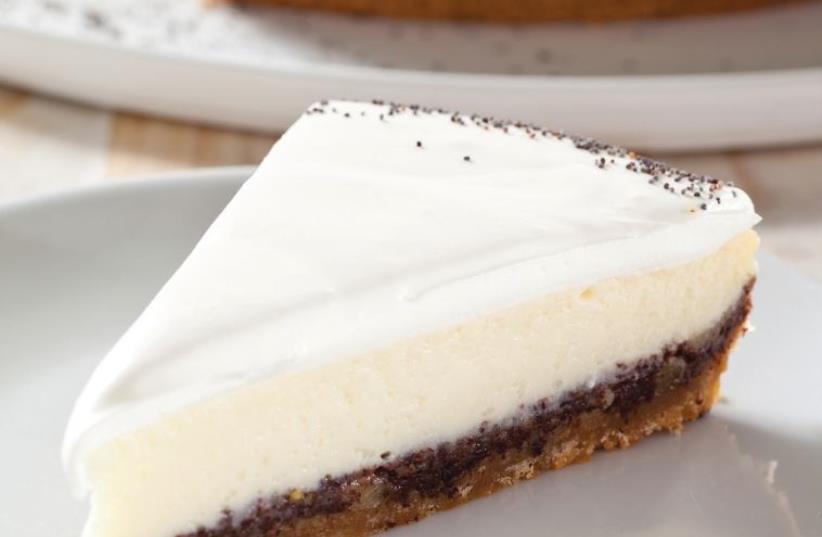 Cheese and poppy-seed pie
(photo credit: BOAZ LAVI)
Advertisement
Poppy seeds are king on Purim. The traditional filling for hamentashen is poppy seeds with honey, but it is also customary to make poppy-seed cakes and cookies for the holiday. We asked chef Amir Porat of the Biscotti bakery in Bnei Brak for his favorite recipes using the little black seeds.But before we start baking, here are a few tips Porat gave us for baking with poppy seeds.Poppy seeds tend to become bitter after even a very short time. For successful results, use fresh poppy seeds that were ground very close to the time you use them.To store ground poppy seeds, keep them in the freezer, where they can keep for a few months. Poppy seeds pair well with spices such as cinnamon, cloves and lemon and orange zest. For a rich flavor, cook the poppy seeds with milk or butter. You may prepare the filling in advance and keep it in the refrigerator for two or three days.

BUTTER AND POPPY-SEED COOKIES
Makes 60✔ 1 cup flour (140 gr.)
✔ 1 cup cornstarch (140 gr.)
✔ Pinch salt
✔ 250 gr. butter
✔ ½ cup powdered sugar (70 gr.)
✔ Zest of ½ orange
✔ 1 tsp. vanilla extract
✔ 1 Tbsp. poppy seeds (15 gr.) For the coating
✔ 1 egg, beaten
✔ 200 gr. poppy seeds
✔ 50 gr. (¹⁄3 cup) demerara sugar In a mixer bowl with a kneading arm, mix all the ingredients and knead for 2 or 3 minutes until smooth. Divide the dough into 2 equal parts. Roll each part to a 3-cm. thick “sausage”; wrap with plastic film and freeze.Preheat oven to 180°. Line a baking sheet with parchment paper.Place the poppy seeds on a plate or tray and beat the egg.Remove from freezer, unwrap and brush the rolls with beaten egg. Roll in the poppy seeds until covered. Slice the rolls into ½-cm. slices and place on a lined baking sheet. Sprinkle a little sugar on top and bake for 10 minutes or until cookies are slightly golden.

For the poppy-seed layer
✔ 6 eggs, separated
✔ 1 cup sugar
✔ 160 gr. ground poppy seeds
✔ Zest of 1 lemon For the almond cream
✔ 100 gr. blanched almonds
✔ 75 gr. butter
✔ ½ cup sugar
✔ 1 egg + 1 egg white For the chocolate glaze
✔ 100 ml. (¼ cup + 1 Tbsp.) cream
✔ 100 gr. dark chocolate Preheat oven to 180°.To prepare the poppy-seed layer: Whip egg yolks with ½ cup sugar until light and fluffy. In another bowl, whip the egg whites with the rest of the sugar until foam is stiff.Add the lemon zest and fold in the egg yolk mixture and the poppy seeds.To prepare the almond cream: In a food processor bowl, grind the almonds well. Add the butter and the sugar and blend until smooth. Add the egg and the egg white and blend until creamy and smooth.Pour the almond cream into a greased 26-cm. cake form. Pour the poppy-seed mixture on top and even out the surface.Bake until a wooden toothpick inserted in the middle of the cake comes out clean, about 30 minutes. Let the cake cool completely before glazing.To make the glaze: In a small pot, bring the cream to a boil. Turn the heat off and add the chocolate. Mix well until chocolate is melted and mixture is smooth.When the cake is cooled, pour the chocolate glaze on top. Let it cool completely before serving.POPPY-SEED AND TRUFFLE FINANCIER CAKE
Makes 3 loaf pans For the filling
✔ 7 egg whites
✔ 340 gr. powdered sugar
✔ 190 gr. (1½ cups) almond flour
✔ 75 gr. ground poppy seeds
✔ ½ cup flour
✔ Zest of 1 orange
✔ 1 or 2 tsp. brandy
✔ 225 gr. butter, melted For the chocolate truffles
✔ 120 gr. dark chocolate
✔ 100 ml. cream (half a carton)
✔ ½ Tbsp. butter
✔ 2 Tbsp. sugar
✔ 1 egg, beaten Garnish
✔ 100 gr. slivered almondsTo prepare the financier cake: In a large bowl, beat the egg whites and powdered sugar about 1 minute until smooth. In another bowl, mix together the poppy seeds, almond flour, zest and flour. Add the dry mixture to the egg whites in 3 times, each time ¹⁄3 of the mass. Mix slowly until homogeneous. Cover with plastic film and refrigerate for at least 4 hours.To make the chocolate truffles: In a small pot, cook cream, sugar and butter over medium heat until it boils. Turn off the heat. Add the chocolate and stir until smooth. Add the egg while whisking until smooth. Transfer the chocolate mixture to a bowl and cover with plastic film. Refrigerate for at least 4 hours.Heat the oven to 170°.Grease 3 loaf pans and divide the financier mixture among the three pans, about 400 gr. each.From the chocolate mixture create truffle balls and place 4 or 5 balls atop the center of each cake. Sprinkle the almonds along the sides of the baking forms.Bake for 20 minutes until golden.CHEESE AND POPPY-SEED PIE
Makes a 26-cm. pie For the base
✔ 250 gr. petit beurre cookies
✔ 100 gr. butter For the poppy seed filling
✔ ¾ cup milk
✔ 150 gr. ground poppy seeds
✔ 120 gr. (¾ cup) honey
✔ 50 gr. walnuts (½ cup), crushed
✔ 50 gr. raisins (½ cup)
✔ Zest of ½ orange
✔ 1 tsp. vanilla extract
✔ 50 gr. butterFor the cheese filling
✔ 4 eggs
✔ ¾ cup sugar
✔ 250 gr. plain 5% white cheese
✔ 250 gr. cream cheese
✔ 200 ml. sour cream
✔ 2 Tbsp. cornstarch
✔ Zest of ½ lemon

To prepare the base: Melt the butter. In a food processor bowl, crush the cookies into fine crumbs. Mix the crumbs with the butter.Transfer the crumbs to a pie spring form and press down on the bottom in an even layer. Refrigerate.

To prepare the poppy-seed filling: Bring the milk to a gentle simmer. Add the poppy seeds. Mix until the milk is absorbed. Lower the heat and add the honey, nuts, raisins, orange zest, vanilla and butter. Cook over low heat for 15 minutes. Let cool completely.Spread over the base and press down.To prepare the cheese filling: In a mixer bowl with the whisking arm, whisk the eggs, lemon zest and sugar on low speed for 3 minutes until the sugar dissolves. Add the cornstarch and mix until smooth. Add the cheeses and sour cream and mix until smooth. Pour the cheese mixture over the poppy-seed layer.Bake in a 160° preheated oven for 35 to 40 minutes. Turn off the heat and leave the cake in the closed oven for 15 minutes.You may top the cake with whipped cream. Whip 1 carton of cream with 2 Tbsp. sugar and spread over the cooled caked. The recipes and photos are courtesy of chef Amir Porat of the Biscotti bakery, 67 Hayarkon Street, Industrial Park, Bnei Brak; 104 Ha’atzmaut, Neveh Oz, Petah Tikva . Teleholiday
Advertisement
Subscribe for our daily newsletter