The multi-platinum, Grammy-winning star arrives on an El Al plane for her first-ever Israel gig. 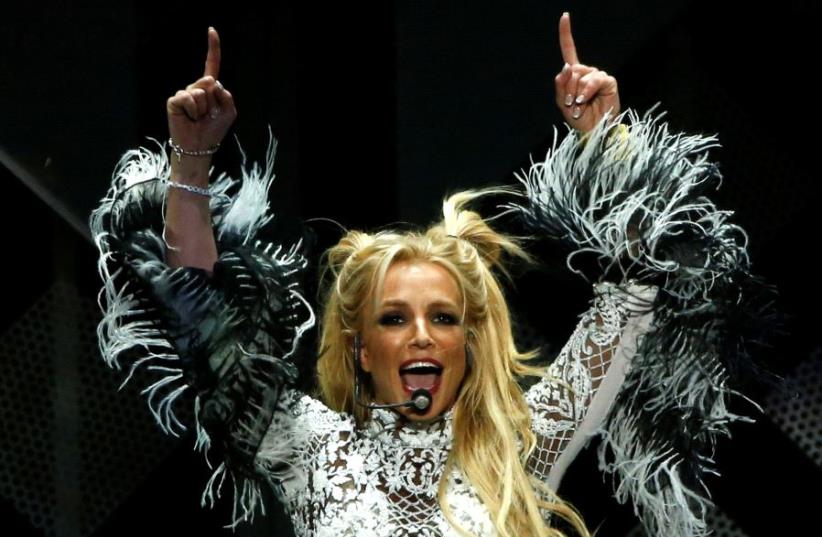 Britney Spears performs at iHeartRadio Jingle Ball concert at Staples Center in Los Angeles, California U.S., December 2, 2016
(photo credit: REUTERS)
Advertisement
Pop music sensation Britney Spears arrived in Israel early on Sunday morning ahead of her much-anticipated Tel Aviv concert that wraps up her summer Asia tour. Accompanied by her senior management staff, her stage crew and her father, Jamie Spears, the iconic blonde superstar flew into the country on Israel's national carrier El Al. More than 50,000 people are expected to brave the scorching temperatures when Spears takes the stage Monday in Hayarkon Park for one of Tel Aviv's hottest concerts this summer."I’ve had such an amazing time performing in Asia over these last few weeks!! One final stop in Tel Aviv on Monday!!" she wrote on Twitter on Saturday before departing for her first-ever concert in Israel.

I’ve had such an amazing time performing in Asia over these last few weeks!! One final stop in Tel Aviv on Monday!! pic.twitter.com/vd5QfjipMC

Last week, the bombshell posted a video to social meeting addressing her awaiting fans in Tel Aviv. "Tel Aviv here I come!" she wrote in the caption to a short recording addressed to Israeli entertainment reporter Guy Pines. "Hi Guy, we're getting super close to the show now - July 3 at Park Hayarkon - I can't wait to see you all there and hope you're all ready to party," she said in the clip.

Tel Aviv here I come!! Can't wait to take the stage at Park Hayarkon on July 3rd! Hey @therealguypines, see you there!! pic.twitter.com/5eO9VuykTA

Born in Mississippi and raised in Louisiana, the the multi-platinum, Grammy-winning star gained worldwide fame in the late 1990s and 2000s with hits such as 'Oops!... I Did It Again,' 'I'm a Slave 4 U,' and 'Crazy.' Hailed as the 'Queen of Pop,' Spears has sold nearly 150 million records worldwide.  Spears's performance in Israeli will be the latest among a star-infused summer lineup that has already seen sensations such as Justin Bieber and Aerosmith and will later see Radiohead and Guns N' Roses.