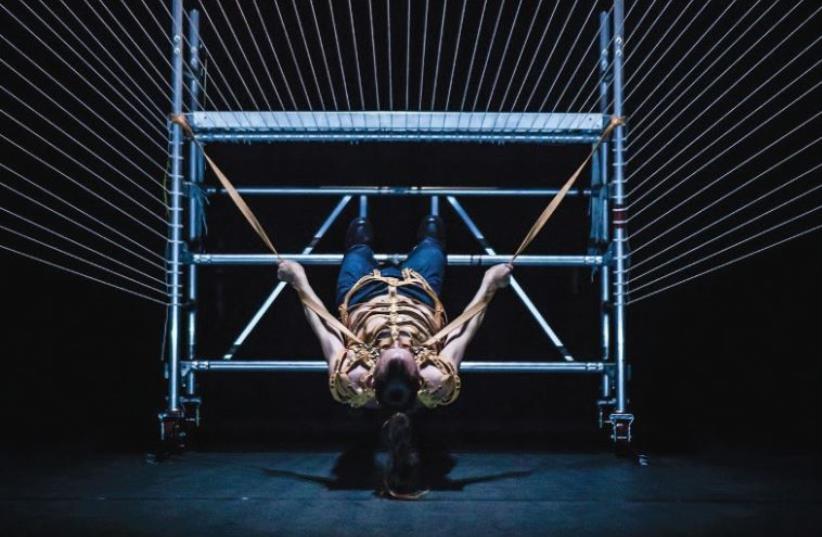 CANADIAN CHOREOGRAPHER Benoit Lachambre performs ‘Snakeskins.’
(photo credit: CHRISTINE ROSEDIVITO)
Advertisement
There has been a lot of talk lately about the restoration of the Israel Festival to its past grandeur.Thanks to the appointment of new artistic director Itzik Giuli, the local artistic community has experienced a reinvestment in the annual event. And if for no other reason, Giuli should get a good pat on the back for hosting Canadian choreographer Benoit Lachambre’s first performances in Israel.Lachambre is, in the eyes of many, one of the greatest artists in the dance world. A dancer turned solo artist turned choreographer and avid collaborator, Lachambre is the purveyor of truly unforgettable performances.Tonight, Lachambre will present Snakeskins at the Jerusalem Theater.The piece is a presentation of the artist’s recent explorations, which consist mainly of somatic practices.Somatics, most often associated with Israeli practitioner Moshe Feldenkrais, is the study of internal physical perception through movement.“I have been creating for so many years,” says Lachambre via Skype. The 55-year-old artist speaks deliberately and with a thick French-Canadian accent.His crystal blue eyes shine from his thin face, framed by long, light-colored locks. “I developed a practice based on somatic work, which was largely influenced by the Canadian Amelia Itcush. She had a practice that worked with force and energy distribution. There is tremendous intensity and transformative potential in the practice. For the past decade my work has been based on that.”Lachambre was born and raised in Quebec, Canada.At the age of 18 he joined Les Ballets Jazz de Montreal, where he spent two years as a company member. From there, Lachambre moved to Toronto Dance Theater. In 1996, he established his company Par B.L.eux. He has choreographed 15 works for the ensemble as well as over 20 commissions for other companies. Lachambre has collaborated with a long list of artists including Meg Stuart, Hahn Rowe, Marie Chouinard, Boris Charmatz and Sasha Waltz.Along the way, Lachambre developed a movement and performance practice that is entirely his own.“I’m working on ways of using less energy to do more with the body in order to find more strength in the body. As I’m going along I get more into that, into a deeper sense of state of being. I aim to reunite the inside and the outside, to blur the boundaries between them,” he says.For more than 20 years, Lachambre has traveled the world teaching his method. This is Lachambre’s third visit to Israel, his prior two being teaching engagements.In his workshops, Lachambre often explores images and movement themes with his students. It was while teaching that Lachambre first came upon the concept that would become the seed of Snakeskins.“In my somatic class I use an image of the water snake. The movement is a very rapid spinal undulation, which requires one to release the muscles around the spine. The spine is the snake and around the spine is the water that the snake swims in. In one workshop I did the idea of shedding. That idea of shedding became Snakeskins.”The first phase of creation occurred during a stint in Amsterdam, where Lachambre was working with dancer Daniele Albanese.“I was teaching at SNDO [The School For New Dance] in Amsterdam. During the day, Daniele and I were working on building solos with the students. At night, we continued the research ourselves. Afterwards, I met with musician Hahn Rowe and designer Alexandra Bertaut,” he explains.Snakeskins premiered in 2012 and has been presented by countless festivals and theaters since. Underneath the title, Lachambre A Fake Solo, as he is joined on stage by Albanese and Rowe. Though many may consider this work a trio, Lachambre still sees the remnants of a solo in it.“I proposed the piece as a solo. Then, it was meant to be a duo between the musician and me. Then I met with Daniele and decided that I wanted to invite him to take part in it, at first as an outside eye, later as an intervention.But I am a very central character in the work.”Throughout the work, Lachambre appears to be in a kind of trance. He is human and animal, present and absent, conscious and not. To prepare for the show, Lachambre spends 30 minutes in the entrance hall of the theater.“The way that I begin is also a preparation for the rest of the piece,” says Lachambre. “It warms me up as I go along. As the trance installs itself in my body I align myself in a crooked way, I twist my legs and stand on the side of my feet. It’s like a puzzle with my body. I cross my eyes, so everything is double, which changes the way I see the surroundings. I feel more like an animal who is shedding, sensing its environment.”

Benoit Lachambre will present ‘Snakeskins’ tonight at 10 p.m. and tomorrow at 4 p.m. in the Rebecca Crown Hall, The Jerusalem Theater. For more information, visit www.israel-festival.org.
Advertisement
Subscribe for our daily newsletter