The world’s most successful musical has come from London to Tel Aviv for a series of performances between August 20 and September 5. 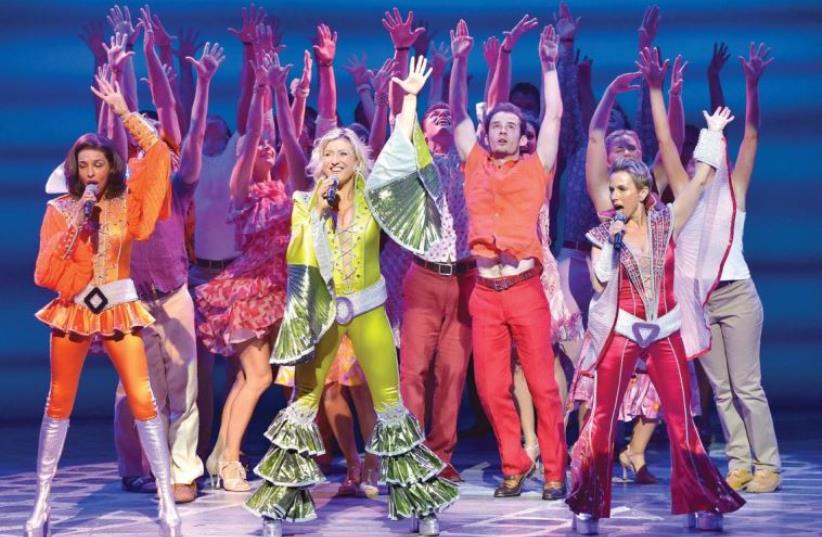 DANCING QUEENS: The cast of ‘Mama Mia’ dazzle local fans at the Tel Aviv Opera House.
(photo credit: YOSSI ZWECKER)
Advertisement
It’s Thursday night at the Tel Aviv Opera House, which is packed for this season’s premiere of Mamma Mia. This is a genuine feel-good production which has you humming and tapping your feet from the first song. The backdrops and settings are simple and effective yet capture the charm and romance that is Mamma Mia. Your full attention is drawn straight away and is maintained throughout the show to the multi-talented performers without any unnecessary distractions.The world’s most successful musical has come from London to Tel Aviv for a series of performances between August 20 and September 5.The musical comedy, featuring smash hits by the legendary Swedish pop group Abba, first premiered in London in 1999. While continuing its run there, it has had a mega-successful world tour, visiting some 400 cities around the globe.Its Tel Aviv debut in 2007 sold out, and the production company decided to return for what promises to be another successful show.The plot of the musical takes place on a mythical Greek island, where a young woman, Sophie Sheridan, sends three wedding invitations to three different men, guessing that one of them is her father after reading her mother’ s diary.The extremely talented cast takes the audience on Sophie’s journey leading to her wedding day hoping and praying that her real father will walk her down the aisle. For a short while you enter Sophie’s world. Giggle with excitement when she reveals to her best friends that she has sent invitations to three possible fathers. Fear for her when her mom is faced with her three great loves from the past. Fill with happiness when everything works out for the best in the end.This musical production stays so close to the 2008 Mamma Mia movie that even the casting of the performers reminds one of the original cast members. This felt a little weird in the beginning and I couldn’t stop making comparisons to the film. However, the Abba music keeps you entertained throughout the show. It was exciting to enjoy this opportunity given to Israelis to watch an overseas production of this quality, enjoyed by millions all over the world.The well-known Abba songs are performed in a way that makes you want to sing along. Numerous times you can actually hear the entire audience singing along with the cast. There’s no extra space in front, otherwise I’m sure people would actually get up and dance in the middle of the show.For non-native English speakers, there’s a Hebrew translation on screens throughout the musical on each side of the stage. So everyone in the audience can join the enormous Mamma Mia fan base.One thing is certain; you are guaranteed to have a great night out. I assure you, you will have a big smile on your face the entire show and will be humming the catchy Mamma Mia tunes all the way home.“Mamma Mia, here I go again My my, how can I resist you?”

Tickets for ‘Mama Mia’ in Tel Aviv are on sale now from Eventim from NIS 230.