Jerusalem-based and Manchester-born brothers Sruli and Mendy Portnoy teach us how to love on their debut album. 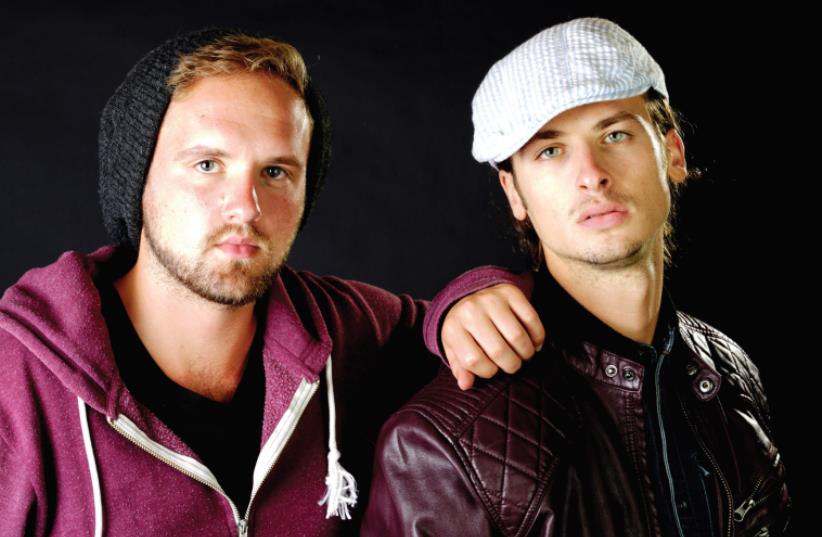 Sruli (right) and Mendy Portnoy (left)
(photo credit: Courtesy)
Advertisement
The Portnoy Brothers make music from the heart. Guitarist and lead singer Sruli, 25, and keyboardist Mendy, 23, have garnered a core fan base in Israel and their home country England due to the melodic harmony arrangements and soulful synchronicity that comprise their sound. The Brothers’ much-anticipated debut album, Learn to Love, will be released on October 15. They have upcoming gigs on September 30 at the Moshav Modi’in Country Fair and Cafe Bialik in Tel Aviv, and also on October 10 at the Abraham Hostel in Jerusalem. In November, they are off to tour in Europe.

Can you talk about your background?
We’re from Manchester, England. We have a big family: nine kids. Our dad was an orchestra conductor turned rabbi. So we grew up in a suburban community, away from the religious infrastructure, but our parents had an open house where lots of people hung out. We’ve been in Israel for many years now, we each made aliya on our own, just a couple years apart. Our parents are still in England, but six out of nine kids now live in Israel.

When did you first know, not only that you were musicians, but that this was what you had to do?
We both started playing music at a very young age, and started playing together [at] around 14 years old. That gradually became more serious, and we realized that collectively, we had something that we wanted to pursue. We continued songwriting and recording. We can’t imagine doing anything else. We’re not good at anything else! (laughing)Sruli: That’s not true, he’s good at other things. He’s an editor and photographer. I feel like I sort of schlepped Mendy along. I was playing from about six years old, making up songs, but he started much later. He sort of caught up and took over very fast. He got better than me on the piano, and then I realized I needed my own instrument, so I moved to guitar. I still think in piano, but guitar is now my main instrument.Mendy: He was taking piano lessons, which made me very jealous. They were out one day, and I sat there for hours playing ‘Mary Had A Little Lamb.’ That was when I realized I wanted to start playing the piano.Before that, because Sruli was learning the piano, my mom had sent me for guitar lessons.So when Sruli first picked up the guitar, she told him he couldn’t because that was my instrument. Then we completely switched.Who is your favorite artist or band of all time? Sruli: The Beatles were amazing songwriters, and they had this ballsiness to try anything, in terms of sonically what was available to them at that time and then pushing it.Mendy: Stevie Wonder is a genius. The Grammys just did a tribute to him, and they had all these current artists perform songs from my favorite album, Songs in the Key of Life. These are monstrous songs, and it was incredible.You can hear all of that on our album; there are bits of Stevie, the Beatles and Simon and Garfunkel.

What was the creative process like for ‘Learn to Love?’
It’s the first full-length album, which usually implies that a band has released an LP or a couple of tracks, but we went straight to the full album without any of that. Besides for the fact that no one is really buying albums anymore, there is something really satisfying about recording and putting 10 songs on one album and having it all there, as opposed to releasing one at a time. There’s something quite expressive about it.The creative process was interesting. We made a lot of mistakes, but now we don’t need to make them again because we made them early on, so that’s good. Sruli wrote most of the songs. We would grab them and pull them together, as opposed to setting out with a plan or a concept. We had some fumbling moments, but now looking back, they all just came together, and you realize that a lot of it has nothing to do with you. It just happened.We didn’t have a producer in the classical sense of the word; it was the two of us and Alon Hillel, who is our bass guitarist and engineer. We did it in a home studio in the center of Jerusalem, with hardly any hardware. That wasn’t out of choice, as much as we were working with a very limited budget. It was literally the three of us co-producing it. Everyone brought something to the table. The recording studio is like a dungeon: no cell reception, no sunlight. But that’s the genius of Alon – he managed to make us sound really good, despite the handicaps of the space.At the very end, Alon went to England for a month and we were in a place where we felt that we needed to release the material, or we were going to get bored of it. So Mendy, heroically, became an audio engineer in the last three weeks. He tied it all together, and then we sent it off to a really serious mixer guy.It’s important to get it all at the right levels. In a way, it’s very purist. There are clapping and feet-stomping noises, and all of it’s real, and it’s not even looped. On the one hand, going forward, we definitely want to work with a producer, but then we don’t want things to be totally out of our control creatively. The whole process of finishing this album was nearly a year and a half. We had no idea what was involved financially in recording an album. So we got the money that we thought we needed for recording, but then we realized we wanted to make music videos, get mixed and mastered, print cds, pay for marketing.So we started a crowd-funding campaign last February, which paid for about half of all of that. We thought we raised so much money, but it goes quickly.Why is the album called ‘Learn to Love?’
A year and a half ago, when the whole thing started, we got a call from a videographer in England who said he loves what we’re doing and he wants to help us put out a video. He was going back to England in two days, so we had very little time. We didn’t have a song that was really ready for a video, and it was like choosing our first single on the spot. We had this “Learn to Love” song, which is a rock/soul ballad, with driving electric guitars and heavy drum groove. Mendy had a dream that he heard the song as a reggae cover.What ended up happening was not a reggae version, but a more acoustic, jolly version.We had about two hours in the studio and we had to record the song from scratch, so we went with this really stripped-down version. Then we did the video the next day. For the video, we just went out to the public; we were on the train, playing for people coming back from work. There was a lot going on here in Israel at the time.The whole idea of the song is to bring together anyone who is open enough to be brought together. It did that in a big way. But there were people on all sides and extremes who didn’t like it. We released the song right before the Har Nof massacre happened, so that Shabbos, the widows posted a plea about love, and with it was our video. The main line from the song is, “Learn to love the ones that love you less.”It got shared hundreds of times, and there was a whole hashtag L2L. Some people thought we were jumping on the back of a tragedy and capitalizing off of it, but it wasn’t like that at all. We released it before, and then it just happened. In the video, there’s an Arab couple doing the L2L sign, and some people reacted badly to that. The same day the Har Nof massacre happened, there was a story that the Arab caretaker of the shul broke down crying and was in the hospital that day bringing flowers to the families. Sometimes it’s harder to see the good people because the bad ones are making all the noise, but they’re there. There’s very little point to putting people in a box.Anyway, the title for the album just came from that and it felt right.If your music had a color and a texture, what would they be? Sruli: green and gooey Mendy: It can’t be one color; there’s way too much going on! For more information on the Portnoy Brothers’ tour dates or their upcoming album, visit www.theportnoybrothers.com
Advertisement
Subscribe for our daily newsletter