Israel Feldman is a local artist who shies away from the spotlight and prefers to let his paintings do the talking. 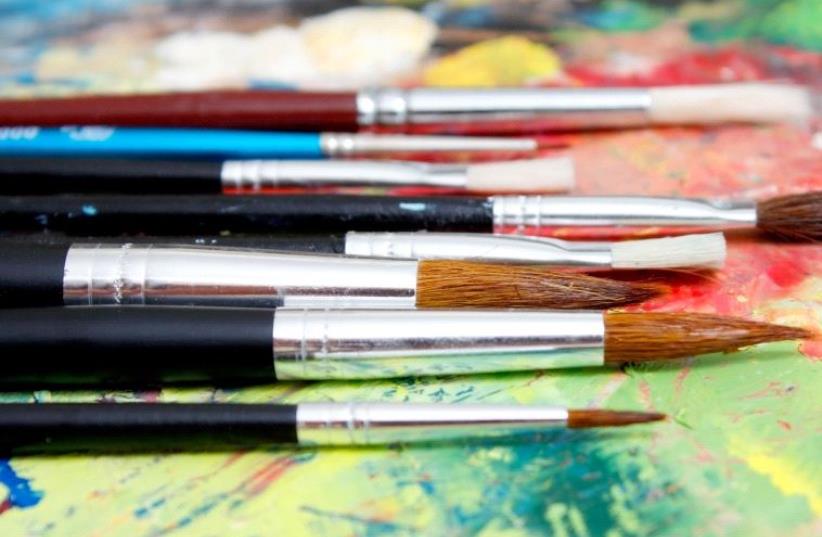 Paintbrushes (Illustrative)
(photo credit: INGIMAGE)
Advertisement
Israel Feldman is a man of few words. Actually, in terms of our interview he was a man of no words. His wife, Aviva Shapiro, handled the interview in his stead, as she is accustomed to doing with all of the press surrounding Feldman’s artwork.It would be correct to categorize Feldman as an intense introvert, who prefers to speak through his oil paints, which depict the landscapes of his rich inner world. This he does masterfully.Feldman, a graduate of the prestigious Beaux- Arts school in Paris, made aliya to Israel in 1983. Since then, his work has been displayed at the Artist House in Jerusalem, among other locations. Feldman was also named arts director of the Yakar Cultural Center. His newest exhibition, Genesis, is currently on display at the Ginot Ha’ir community center in Baka until November 1. Ginot Ha’ir will also host Rabbi Dov Berkovitz on November 8 at 7 p.m., who will speak on the Genesis exhibit. Aviva Shapiro sat down with The Jerusalem Post to discuss finding the spiritual within the material, building canvases from scratch, and wrestling with angels.

Why are you doing this interview instead of your husband?It’s a very good question. He’s very shy and an individualist. He’s very friendly too. People like to speak with him and be with him, but he doesn’t need too many people around him. He’s very quiet and very into his head. Now, with time, I understand that he’s very into his vision. I’ve learned to see that he’s looking and thinking about something and then I see it on the painting. For him, painting is a way of saying, ‘this is the reality of what I see.’ He’s not even coming to the exhibition. He’s been asking me what’s going on and he’s very interested, but he won’t be a part of it.Rabbi Dov Berkovits, whose father wrote a lot about the Holocaust and had a very famous book called Faith After the Holocaust, lived in Shilo. He opened a beit midrash for artists in the Yakar Cultural Center, with the help of my husband. Israel joined this beit midrash and studied there for three years. They were very strongly connected. A lot of the artists there were not especially religious, but they were all very bound together because they had the same goal of spirituality and art. When he first began at Yakar, he was a traditional Jew, but he changed completely. He was always very spiritual though. Even the way he came to Israel shows that. One day he just woke up and said to his parents that he was going. He felt called. Israel searches for the spiritual behind the material and that is something that Rav Berkovitz also did. Israel is always searching for that; the higher level behind the material, the search for the spirit.

Did Israel always know that he wanted to be a painter? Actually when he was accepted to Beaux-Arts, he studied sculpture.He didn’t study painting because he had been painting for so long that he wanted to study something he didn’t know. So in that sense, he was always a painter, from [a] very young [age]. Israel studied with a big sculptor, who is very famous, while he was in school. Even when Israel was sculpting though, he was still working with paint. He builds his canvases himself, even now.He doesn’t go buy canvas; he does everything by himself. When he begins to paint, I always have to call the places that sell building supplies to send me sand, stone and wood. No one would think that I’m asking for all of this for a painter – maybe to build a house! Israel has to know that everything is exactly the way he wants it. He is really an individual. Everything has to be exactly right, especially the tension of the wood. He works on every detail. From the sand, wood, stone and oils, he builds the painting. From this approach, you can appreciate what is behind the materials, the space behind. Israel comes from a very artistic family in France. His father’s house was like a museum.

Can you talk about the ‘Genesis’ exhibit?It has been traveling around Israel a bit, and before that it [in great demand] in Europe, [in] Paris, Amsterdam and Germany. No matter where we’ve shown it, people have come to me and said that when they are looking at his paintings, they know that they have a soul. People say to me that they can look at the paintings for hours; they plunge into them. They are almost overwhelming to the emotions.His paintings speak to everyone; everyone can find themselves inside, which is very powerful. He tells me that the process of creating is a struggle for him between the materials, which pull him down, and the inspiration for the painting, which is pulling him back up.

Where does he paint?He has a studio in Or Haganuz, which is a little village near Meron in the Galil. When he’s painting, he lives there during the week and comes back to Jerusalem on Friday.He calls me a lot of course during these times. He tells me that he is struggling with the paintings and not succeeding. When he’s finished, he always says, ‘It’s okay.’ When he says that, I know it’s a great masterpiece.He’s very particular. Whatever he has in his soul, he wants to show it in a greater way. His name is Israel, which means to struggle with God. Yaakov struggles with the angel and by the end, he is called Yisrael.I say to my husband all the time that he really is Israel because he is all the time struggling with the angels when he paints. You can see it in his work. Everyone always says that they see the struggle, the ups and the downs, in his art.For more information on Israel Feldman and his paintings, visit www.israel-feldmann.com.