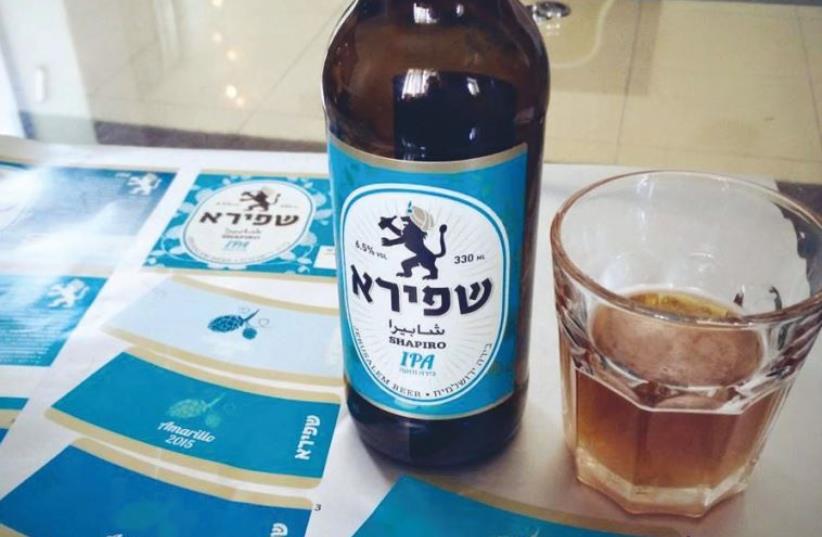 'Shapira' beer
(photo credit: PR)
Advertisement
Jem’s Beer IPA (India Pale Ale) IPA is probably the most popular craft beer style in the world today.Some beer historians believe that the style evolved in 18th-century Britain, when the regular pale ales being shipped to British soldiers and civilians in colonial India spoiled during the long sea voyage. Brewers found that by adding a lot more hops to the recipe, as well as extra yeast and sugars, the stronger beer arrived fit for consumption.The style also caught on in England, where beer drinkers appreciated the spicy and refreshing bitterness of IPAs.The extra portion of hops, which are little green flowers, or “seed cones,” add bitterness to the aroma and flavor of the beer, along with citrusy, fruity, spicy or piney tastes.“We thought that the Israeli market has become mature enough for the taste of an IPA,” says Jeremy Welfeld, one of the partners of Jem’s Beer Factory in Petah Tikva. “Still, in deference to the Israeli palate, we kept away from the extreme bitter taste you get in some American and European IPAs.”Welfeld adds that his IPA is made with six different hops from all over the world and Cara Pils malted barley from Wisconsin, known for adding body and head retention to beer. Alcohol by volume is 6%.Around seven of the larger commercial Israeli craft breweries now make an IPA, proving the growing popularity of this style. Several of the smaller local breweries also have their versions of India pale ale.Jem’s IPA pours out of the bottle very pale and cloudy, the color you may expect from a wheat beer, with a thin creamy head. There’s an aroma of grapefruit and grass but not of hops. Even in the taste, the hop bitterness is very understated, but you do get tropical fruits, perhaps pineapple and banana, and floral spices.In short, this beer is not really an IPA by the hopped-up standards of today but more like a pale ale or even a wheat beer with some extra hops. It’s a dry beer, light and refreshing and very carbonated, and would go well with any strong, spicy food or sweet dessert.Crembo by Herzl Brewery The second new beer is from the Herzl Brewery in Jerusalem, and it’s intended for the colder months of the year. It’s called Crembo after the iconic Israeli confection Krembo, which is eaten only in the winter, probably because it would melt down to a gummy syrup in the summer months. This Israeli contribution to the culinary arts is basically a chocolate-covered fluffy marshmallow on a biscuit base. Israeli kids, and not a few adults, devour them in huge numbers every winter.Herzl’s Crembo beer is called a “milk stout” (also known as “cream stout” or “sweet stout”) because it is made with lactose, a sugar derived from milk. Since lactose is not fermentable by beer yeast, which means the yeast cannot digest it, it stays sweet in the beer and adds body, creaminess – and calories. In fact, beginning 100 years ago, milk stouts were believed to be beneficial to nursing mothers because of their nutritious ingredients.For those concerned that the addition of lactose would make Crembo beer a dairy product, most rabbinic authorities do not consider lactose as dairy, even though it is derived from milk. This is because it undergoes a process during its extraction from milk that renders it unfit for consumption.Maor Helfman, a partner in the Herzl Brewery, explains: “We got the idea for Crembo beer by asking ourselves, ‘What is the quintessential Israeli delicacy in the winter?’ The answer is the Krembo confection. So we built a beer around the same flavors which was serious but with a wink towards the fun of a Krembo.Even the blue foil at the top of the bottle duplicates the packaging of a Krembo.”To achieve the other flavors, Crembo beer is made with Madagascar vanilla beans and cocoa beans during the fermentation. At 7.7% alcohol, it’s a strong beer.Crembo pours out black like a good stout should, with a long-lasting tan head. The dominant aromas are coffee and vanilla, with a whiff of bread. The chocolate hits you when you take a taste, as does the vanilla. Those two popular flavors blend together in a very creamy mouth feel. Other stouts may have a bitter chocolate taste, but with Crembo it’s definitely milk chocolate. At the bottom of the glass, I noticed flakes of either vanilla or chocolate beans, or maybe both.My drinking partner stated, “It’s as close as a beer can get to ice cream!” Crembo is a beer experience you don’t want to miss, but I’m sorry to say that Herzl has already discontinued brewing it. There may be a few bottles still on the shelves at your favorite liquor store, so I suggest you get over there and buy them while you still can.Doug Greener owns MediawiSe advertising and direct marketing agency in Jerusalem and writes a web-log on Israeli craft beers at www.IsraelBrewsAndViews.blogspot.co.