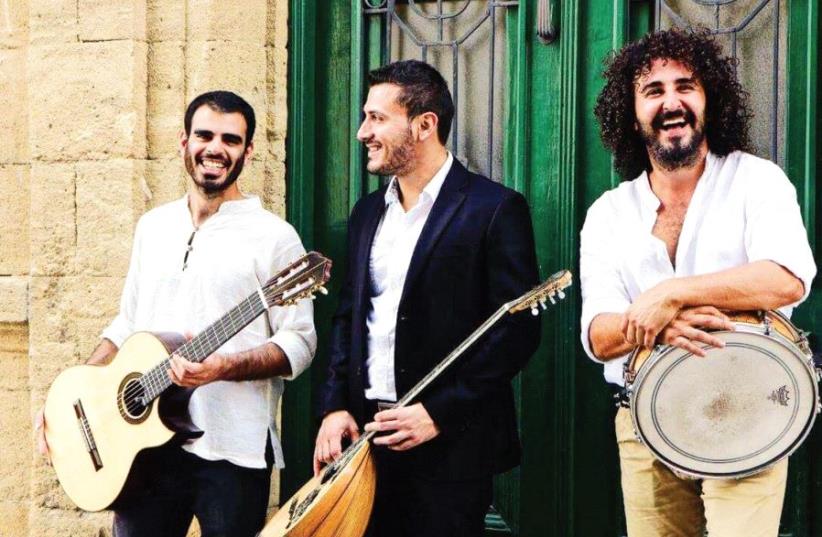 Trio Drumbouki, left to right: guitarist Dudi Shaul, bouzouki player George and drummer Petros Kkallis
(photo credit: SAVVAS MILTIADOUS)
Advertisement
The fifth annual Méditerranée Festival is about to take place at its regular berth of Ashdod.Judging by the roster for the June 8 to 15 event, it offers something for everyone. All told, there are 350 artists across a wide spread of disciplines and genres in the program, taking in musicians of various ilks, cinematic works and high-quality culinary endeavor.The entertainment will be available at nine venues around the city, including the Performing Arts Center, the Ashdod Museum of Art, The Monart Auditorium and a host of movie theaters, restaurants and pubs dotted across Ashdod.The headline act is the Radio Ramallah show, which will “salute the singers, players and tunes regardless of borders or nationality.” The repertoire will take in numbers performed in the original Arabic and others in Hebrew translation. The A-list cast includes Beri Sacharoff, Yehuda Poliker, Maurice El-Mediouni, Miri Mesika and Amir Benayoun. The soloists will be backed by a 15-piece instrumental ensemble.Elsewhere in the eight-day itinerary there is stellar Serbian- Croatian musician and band leader Goran Bregovic; TR3S Flamenco from Spain; leading exponent of the fado Portuguese blues genre Carminho; and celebrated Guinean kora player Sekou Kouyate.On the domestic side of the lineup, patrons will find seasoned kamanche player Mark Elyahu; broadly roaming bassist Gilad Ephrat and his band; veteran singer-songwriter Micha Shitreet; and high-energy ethnic music troupe Quarter to Africa.The cross-cultural roster also includes an intriguing threesome called Drumbouki. The band includes Cypriot bouzouki player George Demetriou, compatriot drummer Petros Kkallis and Australian-bred Israeli guitarist Dudi Shaul. Singer Meital Rachamin will join the band for the Ashdod gig.Shaul first picked up a guitar at the age of 12, when he lived with his Israeli-born father and Australian mother in the small but lively town of Bellingen, situated midway between Sydney and Brisbane on Australia’s east coast.The youngster developed an interest in a wide swath of sounds from the word go.“I grew up on ethnic music,” recalls the 26-year-old. “We’d take a lot of trips as a family to all sorts of places, and I heard music from India, and my father is Iraqi, so there was Arabic music, too.”That rich cultural sonic diet was augmented by contemporary pop and rock, and the youngster had a well-developed interest in and capacity for accommodating different genres.“I played some pop and rock, but I really liked classical guitar, so I went to study classical music and musical performance in Melbourne. Towards the end of my studies there, I really got hooked on Brazilian music, and I am still very active on that scene,” he says.Shortly after that, Shaul became involved with the Brisbane Multicultural Arts Centre.Recognizing his broad sweep of musical interests and skills, he was sent to Paris to identify top performers in various areas of musical endeavor, with the aim of bringing them to Australia to perform. It was there that the seed for Drumbouki was sown, when Shaul came across Demetriou.“In 2014 I was given sponsorship to bring musicians from all sorts of cultures to Australia to play traditional music together,” recalls the guitarist. “I met George there. It was something really special, amazing,” he adds.“I went to the room where the musicians were gathered, but then I heard the sound of someone playing bouzouki from a different part of the building. That drew me to the other room, and I saw George sitting there on a sofa. That was the first time I saw and a heard a bouzouki,” he recounts.It was love at first sound.“We started playing together, with me on guitar, and something special happened at that moment. There was an immediate strong connection between us, and that’s how it all started for us,” he explains.The two stayed in contact after Shaul returned to Australia, and it was only after the guitarist came to Israel for a visit that the group began to take shape.“I was here visiting family, and then suddenly I thought, ‘I’ve got a friend in Cyprus, why don’t I go over to see him?’” And the rest is history.“I went over there, and we arranged a few gigs, and Petros joined us. Petros brings a lot of energy and joy to the music. He’s more into fusion – rock, pop and Latin music,” he says.Each of the members brings his own cultural and musical background to the fray. For the upcoming concert, Rachamin will up the cultural ante with some of her own Turkish, Greek and Israeli influences.“The first song I wrote came about after I just started singing a tune when I was on the balcony of George’s parents’ home in Cyprus,” Shaul recalls.“Then I started playing it on guitar, and then George said, ‘Look, you’ve got a new piece.’ That was great. Everyone brings something to the group.”Judging by the YouTube clips of the band, it is a seamless, natural confluence.“What we do is not a fusion thing,” Shaul points out. “It all comes to us naturally. Each of us brings something, and somehow it all connects organically.”Sounds perfectly healthy to me.So if it’s culinary sustenance you’re after, an eclectic range of musical entertainment or some intriguing cinematic offerings, a trip to Ashdod next week might well be in order.The Méditerranée Festival takes place June 8 to 15.For tickets: (08) 856-8111 and www.mishkanashdod.co.il. For more information: www.medifestival.co.il.