Summer at the movies

Past, present and future are featured in this season’s film line-up. 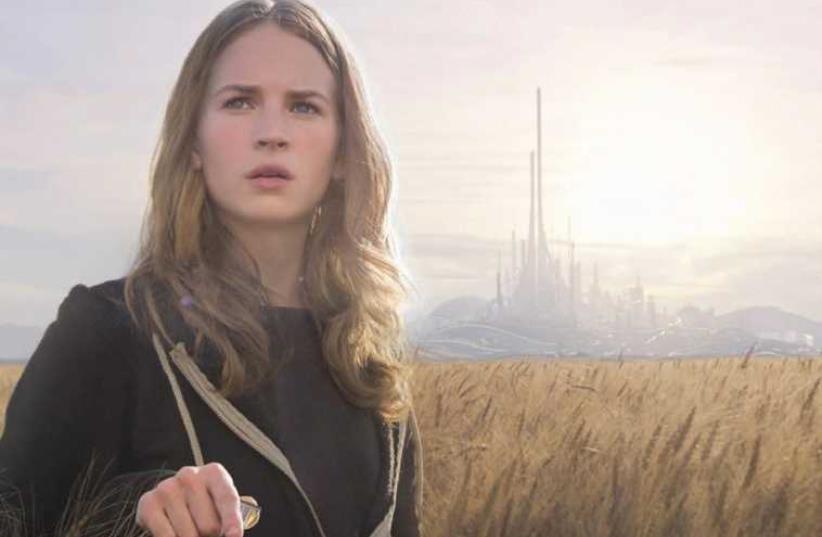 ‘Tomorrowland’ movie
(photo credit: PR)
Advertisement
The summer movie season is under way, and while it’s traditionally a time for blockbusters – which can be fun or just annoying – there are a few other more complex movies in the mix, as well as some locally made films.Tomorrowland, a sci-fi drama with George Clooney, was directed by Brad Bird, best known for the Pixar cartoons The Incredibles and Ratatouille. Clooney plays a former boy-genius inventor who teams up with a teenage girl fascinated by science to try to find an alternate universe and save this one. It certainly has great special effects, and Clooney is always watchable. It opens this week.Have you ever wanted to see the former governor of California play the father of a zombie? If so, your prayers will be answered with Maggie, a thriller coming in July that stars Arnold Schwarzenegger as the loyal father of a daughter (Abigail Breslin) who has been infected with one of the zombie viruses that has been going around a lot lately on TV and in the movies.For more character-driven fare, check out Noah Baumbach’s latest, While We’re Young, which opens in early June. The acclaimed drama stars Naomi Watts and Ben Stiller as a long-married bohemian couple in New York who strike up a liberating but sometimes uneasy friendship with a 20-something couple, played by Adam Driver (who stars in the upcoming Star Wars movie and is on the show Girls) and Amanda Seyfried (from the TV series Big Love and the film Mama Mia!).Love & Mercy, another early June release, is a biopic of Brian Wilson, the troubled musical genius behind The Beach Boys. It tells the story of how, in the 1960s, he tried to steer the group away from bubblegum pop and toward more challenging music while fighting serious mental illness. It also shows him in the 1980s when his life was controlled by the controversial doctor Eugene Landy. Wilson is played by Paul Dano in the earlier sections, and later by John Cusack. Paul Giamatti plays Landy, and Elizabeth Banks plays a woman Wilson tries to romance. Israel-born Oren Moverman is one of the co-writers.The Entourage movie finally comes out on June 11. Based on the popular TV series about a young actor and his buddies, it was particularly memorable for Jeremy Piven’s performance as the actor’s crazed agent, Ari Gold. It turns out that in the movie, Ari’s long-suffering gay assistant, Lloyd (Rex Lee), is getting married in a Jewish ceremony and wants Ari to give him away.If you’re looking for a movie for a girls’ night out, try Trainwreck, which opens here on July 23. Starring and written by the edgy stand-up comedian Amy Schumer (you can check out her work on YouTube), it tells the story of a young New York woman who believes that romance and commitment are just fairy tales and has to readjust her thinking when she meets a man who actually cares about her. Although it may sound silly and formulaic, it was directed by Judd Apatow, who has made such comedies as Knocked Up and is an executive producer of the TV show Girls.Meryl Streep stars in Ricki and the Flash, which comes out in mid-August. She plays a rock ‘n’ roll star who left her husband and kids to pursue her dream of musical stardom, then returns home to console her daughter (Mamie Gummer, also her real-life daughter), whose husband has walked out. Kevin Kline plays Streep’s ex, and Rick Springfield is one of her musician friends. It’s written by Diablo Cody (Juno) and directed by Jonathan Demme (Philadelphia, The Silence of the Lambs).Dustin Hoffman stars in Boychoir, the story of an orphan from Texas who finds himself singing in a school choir. The film opens in mid-June.The big Israeli summer movie will be The Kind Words, directed by Shemi Zarhin, which opens all over the country at the end of May. Zarhin is known for such crowd-pleasing hits as Aviva, My Love and The World Is Funny. The Kind Words tells the story of three adult siblings who discover that the man they’ve grown up with is not their real father, so they set out for France to find their biological parent.