‘I think that it’s important that globally we talk about women of all shapes and sizes, because that’s what we are,’ says Graham. 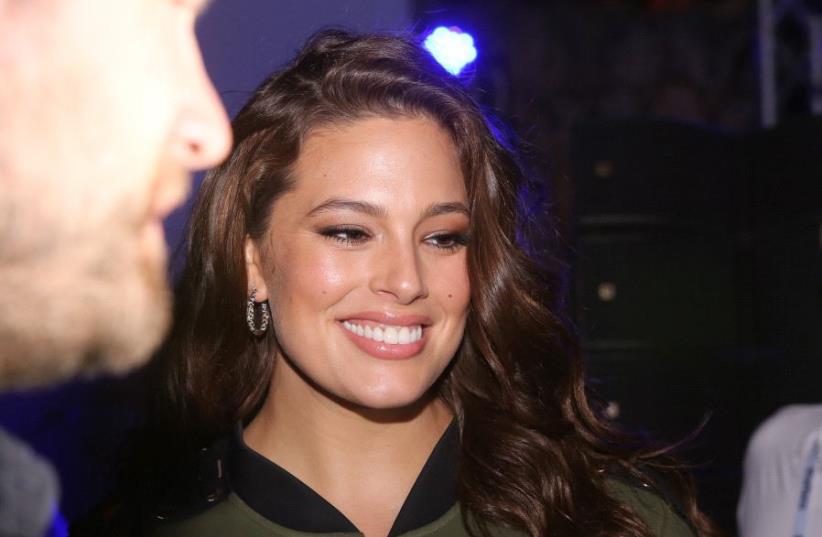 Ashley Graham at the Forbes 30 Under 30 Summit at the Tower of David Museum in Jerusalem on April 5, 2017
(photo credit: SASSON TIRAM)
Advertisement
Perhaps more than any other woman in decades, plus-sized supermodel Ashley Graham has single-handedly defied conventional standards dictating female beauty, potentially ushering in a Rubenesque renaissance.Indeed, Graham, 29, is the first size 16-plus model to grace the cover of the Sports Illustrated Swimsuit issue. She has also appeared on covers of Vogue, Elle, Harper’s Bazaar and Glamour.Graham, who is in Israel for the annual Forbes 30 Under 30 Summit, hosted the gathering’s final event at Jerusalem’s Tower of David Museum on Wednesday night, at a private gala that featured musical acts, including the YMCA Jerusalem Youth Chorus.Between hosting duties, Graham spoke with The Jerusalem Post about her first experience visiting the country, and being an icon and champion for full-bodied women across the globe.After arriving on Sunday and spending several days in Tel Aviv and in the North, Graham, who was raised in a Christian home, expressed awe at visiting holy sites.“I did the Sea of Galilee yesterday. Saw where Mary Magdalene was. Went to the Dead Sea and walked down the Jesus Trail. It’s been nonstop, just amazing,” she said, adding that Israel’s modern culture and infrastructure surprised her.“I grew up very Christian, and knew all the Bible verses about Jesus, so really thought I was going to see a desert and old Jesus buildings, and didn’t know what to expect,” she continued.“But Tel Aviv is really a lot like New York and LA combined. You’ve got the palm trees and the ocean and the city and party scene. And the people are really liberal and great to talk to as well.”Noting Israel’s small size, Graham added that she was able to visit nearly all the sites she hoped to see over a fourday period.“I had no idea [the country] is the size of New Jersey. So it’s been incredible, because I could drive to everything and see it all pretty quickly,” she said. “Every city has been such a wonderful experience. I can’t wait to come back and bring my husband, my mom, my in-laws and my sisters. I want to plan a whole tour!” Jerusalem, Graham said, was particularly awe-inspiring.“The thing that struck me most about Jerusalem is that I knew there was a lot of history here, but it seems like every corner has history – every stone and street,” she said. “And if people come here, I recommend getting a really great tour guide who is planning it out, because you don’t want to come and just wing it. There’s too much to do see and do.”Asked about the considerable impact she has made on the modeling world – and society in general – for full-bodied women, Graham said that plus-sized women and models in Israel approached to thank her for her advocacy.“It’s important that globally we talk about women of all shapes and sizes, because that’s what we are,” she said. “We’re all ethnicities and religions and have different backgrounds and views on life. And I feel that it’s important that in our sisterhood we just build each other up. That’s what I want to promote.”Graham added: “It’s not just about curvy women, it’s for every person here on Earth.”The best part of being a plus-sized model, she said, is: “I can work out whenever I want and can eat whatever I want and still look great.”The downside, Graham lamented, has been “having people tell me what I can and can’t do with my body. It’s my body, and I own it.”In terms of the growing phenomenon of body-shaming, Graham said she more than identifies with victims of the cruel practice.“For all the women who have been body-shamed, I hear ya sisters because so have I,” she said. “And I think it’s ridiculous that people want to put a standard on what beauty is. At the end of the day, you call the shots. It’s your body, and you can’t let others dictate who you are.”In the meantime, Graham said she was sad to leave Israel on Friday, but planned on returning soon with her family.“I can’t wait to come back,” she said with a wide smile.