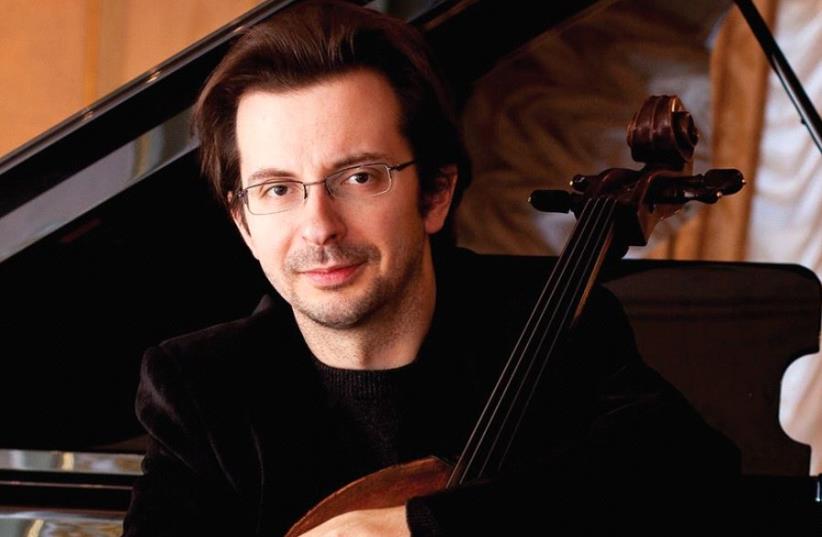 Emanuelle Silvestre
(photo credit: WALTER GAROSI)
Advertisement
In case you hadn’t noticed, traditionally inclement Purim-time weather notwithstanding, spring has duly sprung. Our countryside has, for a few weeks now, been awash with the delightful floral pageantry of almond blossoms, anemones, mustard flowers and more.And to make absolutely certain that the seasonal message is well and truly absorbed, next weekend Kibbutz Kfar Blum will host the annual Spring Festival at its lusciously verdant Upper Galilee berth.The three-dayer (March 23 to 25) will center on the cello. The instrumental focus may very well have something to do with the fact that the artistic director of the festival is Zvi Plesser, an internationally renowned cellist who also oversees the program of the Voice of Musical Festival, the major classical musical event that will take place at the same venue in July for the 33rd year.Next week’s festival, called Cellisimo, features a glittering lineup of leading players of the four-stringed instrument, such as Plesser, Simcha Kheled, Danielle Ekta, Hillel Tzeri and Emanuelle Silvestre. Other leading artists on the Kfar Blum roster include pianist Revital Hachamov, as well as rock drummer Matan Ephrat, who will team up with stellar cellist and life partner Maya Belsitzman. The latter pairing will stretch the disciplinary offering beyond the confines of the classical field.Silvestre will certainly bring the requisite credentials to our northern climes. As principal cellist of the Israel Philharmonic Orchestra, the 44-yearold Italian-born Israeli will add a wealth of experience and silky skills to the musical proceedings over the weekend. He also has the necessary genetic support.“I don’t know if you can say the cello chose me and I didn’t choose the cello, but I come from a musical family,” says Silvestre. “My grandfather was a cellist, and he started teaching me [to play] when I was four. I got lessons from him every evening, about half an hour each time. My grandmother was a pianist, but really I got my first musical training from my grandfather.”So it was classical music from the get-go for the young Silvestre, although he did get into some other sounds as well.“I listened to rock and pop music, although I have to say not so much jazz – it was more the blues. I don’t like modern jazz. I like more the 1970s and ‘80s pop music. I think I am quite open now, but I mainly listen to classical music,” he says.Starting out so young, Silvestre may have been forgiven for seeking to grab the limelight and pursuing a predominantly solo career. But the cellist says he is just as happy to contribute to collective musical output.“I discovered that the thing is to play everything in the best way you can. It doesn’t really matter if you are a soloist or part of an orchestra. If you are playing in a great environment and if you intend to play well, you get a lot of satisfaction from that,” he notes.Silvestre will perform a wide range of material at Kfar Blum. Next Friday he will join Plesser and Tzeri in a Bach program, as well as contributing to a rendition of Brahms’s Sextet No. 2 in G Major. He is also down for a slot in Bohemian cellist and composer David Popper’s Requiem for 3 Cellos and Piano Opus 66, as well forming part of a four-cello lineup in La Muerte del Angel by Argentinean tango composer and bandoneon player Astor Piazzolla.The Kfar Blum works take in groups of varying sizes, and that suits Silvestre.“It is nice to be a soloist because you can express yourself anyway you like,” he observes. “But to be in an orchestra is also a really important way of playing, and you also have some solo parts with an orchestra. When that comes, it’s a pleasure; and it’s also fulfilling to play in a large ensemble.”In fact, Silvestre has accrued his fair share of smaller ensemble work, founding the Quartetto d’archi del Teatro La Fenice di Venezia foursome while he was still a resident of Italy.“After many years in a quartet, I realized it is very difficult to be in that. It was a good experience, but I think there is a social element to playing in different ensembles. When you play, you are also doing something with other people, so in the quartet you express yourself because you are the only cellist, and you are working with only four people and you have to be in good contact with them. It is challenging and I like it, but with an orchestra it is very different. It is more organic and more complex,” he explains.Silvestre says he has benefited greatly from his five and a half years with the IPO and working with the likes of conductor Zubin Mehta.“I don’t know if my way of playing during this time has changed, but it has grown richer,” he notes, reiterating the social component. “The orchestra is full of people from everywhere, from different schools. Some of it was new for me. I wasn’t in touch before with the Russian school, and there are many soloists. Altogether, I think I have grown a little bit with this experience. It is a high level, and there is also the quantity factor. You work so much in a certain way, so you develop.”Elsewhere on the Spring Festival roster there will be a work by 18th-century French cellist-composer Jean-Baptiste Barrière; a Chopin cello sonata; a Beethoven cello sonata; a suite for two cellos and piano by 20th-century Italian-American composer Gian Carlo Menotti; and a work by Robert Schumann.And with a more contemporary slot by Ephrat Belsitzman also on the program, there is plenty to enjoy in a beautiful location next week.

The Spring Festival takes place March 23 to 25 at Kfar Blum. For tickets and more information: (04) 681-6640; tickets.galil-elion.org.il; and http://www.kol-hamusica.org.il
Advertisement
Subscribe for our daily newsletter