If you want to bake like a pro on Passover, go check out how the gluten-free bakers bake year round. 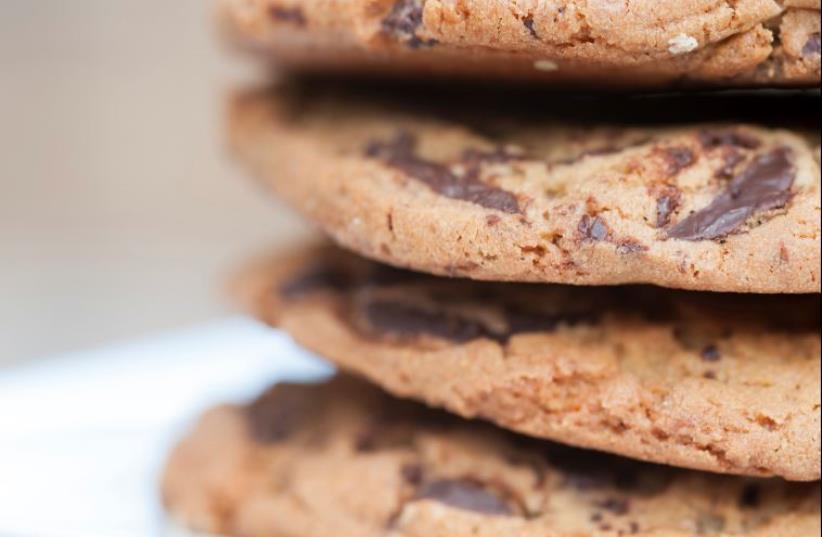 Chocolate chip cookies
(photo credit: ING IMAGE/ASAP)
Advertisement
Passover is fast approaching and everyone is looking for new things to bake and surprise their families with. The question is: Could there possibly be anything “new” in Passover baking? How “new” can you get with plain old, heavy matza flour? This question prompted me to delve a little deeper into the chemistry of Passover baking, resulting in an astounding revelation.When you think about it, what makes Passover baking unique? The fact that you cannot bake with any regular flours – wheat, spelt, oats, etc. There are five types of grains and flour that are not permitted for cooking or baking with on Passover, wheat, barley, spelt, rye and oats. When these come into contact with water for 18 minutes or more, they become hametz.Chemically speaking, these five grains all have gluten-type proteins (except for oats perhaps, the jury is not in yet on whether the oats protein, avenin, is a true gluten or not). The only way you would be allowed to bake with any of these flours on Passover is if they were already pre-baked, as in matza flour.Since matza flour is already baked, the gluten protein is already gelatinized and essentially de-activated for baking purposes, which means that kneading dough with matza flour cannot form a gluten structure. This is not to say it contains no gluten at all, rather that the gluten is inactive for bakers, but certainly present if you have celiac disease.What all this means is that Passover baking is in essence equivalent to gluten-free baking! So I set out to see how gluten-free bakers bake year round. Unfortunately I encountered a different problem. Most of the flours gluten-free bakers use year round, are kitniyot – rice flour, corn flour, soy flour and quinoa flour. While that is okay for Sephardim, Ashkenazim – who avoid this category of food on Passover – still have a problem. This was when the eureka moment occurred.There are two types of flour used in gluten-free baking that are not kitniyot.One is potato flour, or potato starch, but baking with that doesn’t work well.Whatever you bake turns into a rubbery jelly and does not have a floury texture at all. The second flour is tapioca flour or tapioca starch.Tapioca is very popular in South America and comes from the cassava plant (Manihot esculenta). The roots of the plant are ground to make flour. Tapioca flour has little or no vitamins, minerals or protein – it is almost 100% starch.So while it may not be the most nutrient-rich food, it has numerous benefits for the Passover baker. It is not one of the five grains, therefore it is kosher for Passover. It is not kitniyot, as it comes from the plant root, and it gives a floury texture when used in baking (unlike potato starch). That makes it an almostperfect Passover flour. You can basically substitute it one-for-one in most regular baking recipes. It is also readily available in most health-food stores (in the glutenfree section).I say “almost perfect” because tapioca starch does have two drawbacks. Since it contains no gluten, it has no “rubberizing” agent to hold it together, so it does not lend itself to bread-type dough, or dough that needs to be rolled out with a rolling pin. It also has a bright white color which doesn’t caramelize well during baking, which means whatever you’re making is going to come out pale and anemic looking.There are ways to work around these two deficiencies. For example, if making a pie crust, instead of rolling it out with a rolling pin you can press it by hand against the pie dish to make the crust.You may also color it either by adding coloring agents like cocoa (in cookies) or basting with egg to deepen the hue, as in pie crusts.But it works excellently in cakes, giving them a light, airy texture (no more heavy matza-flour cakes!) It also works well in cookies and pie/pizza crusts. If you want something with a crunchy, chewy texture, you can combine tapioca flour with matza flour, like in cookies – about two thirds tapioca starch and one third matza flour.While I thought I was a genius after discovering this flour, it turns out industrial bakeries have been using it for years on Passover, but it has remained an industry “secret.” Well it is a secret no longer! It sounds too good to be true: kosher for Passover, gluten free, gebrochts free, light and airy... a little taste of heaven in your own Passover kitchen.Wishing you a happy, kosher Passover.

TAPIOCA FLOUR CHOCOLATE CHIP COOKIES
Makes 24 cookies ✔ 200 gr. margarine or butter
✔ ²⁄3 cup sugar
✔ 2 eggs
✔ 1 tsp. vanilla essence
✔ ½ tsp. salt
✔ 1 tsp. baking soda
✔ 3 Tbsp. cocoa powder
✔ 3 cups tapioca flour
✔ 1 cup chocolate chips Cream margarine (softened, not liquid) and sugar together. Add the eggs, vanilla, salt, baking soda and cocoa and mix well.Gradually add the flour and mix until a lump of dough is formed. Add chocolate chips and mix just until incorporated. Roll the dough into small balls and place on a parchment paper-lined baking tray. Bake for approximately 10 minutes at 180º.Master baker Les Saidel is CEO of the Saidel Artisan Baking Institute (www.saidels.com), that specializes in training and education in the field of organic, healthy, artisan baking and the inventor of Rambam Bread. He also lectures and works as a consultant in the fields of cereal chemistry, health and nutrition.
Advertisement
Subscribe for our daily newsletter