Tel Aviv municipality will hand out grants to struggling artists and city residents who work in cultural organizations, as well as giving out scholarships to artists for future events. 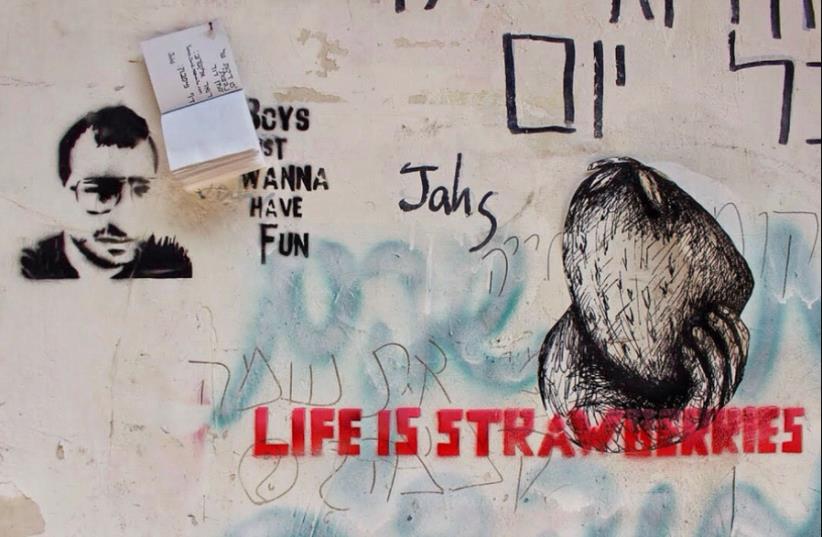 Life is Strawberries Graffiti in Tel Aviv
(photo credit: Courtesy)
Advertisement
Tel Aviv Mayor Ron Huldai announced on Thursday that the Tel Aviv Municipality has set up an emergency fund to assist the city's independent artists, and to city residents who work at municipal cultural corporations and cultural associations which are supported by the municipality.
Independent artists have been one of the groups most heavily impacted by the financial crisis caused by the COVID-19 pandemic, as mass gatherings are set to be the last thing to reopen in any scenario, with many artists no longer even able to rely on the service industry to stay afloat.
Financial assistance will be provided through two routes:Through the first route, grants will be given to artists and municipal cultural corporations and municipally-supported cultural associations that have suffered severe economic distress resulting from the crisis.
Through the second route, scholarships will be given to a number of select independent artists in exchange for artistic activities to be held in the coming weeks and months.
The NIS 700,000 reserved to be given out through the fund were assembled thanks to a number of private donors through the Tel Aviv Development Foundation and with rerouted funds from the overall municipal budget.
Grant and scholarship recipients will be selected by a special committee which will meet in the coming days.
Ron Huldai, Mayor of Tel Aviv-Jaffa said of the move, that "Tel Aviv-Jaffa has served as Israel's cultural center since its founding, its many artists are what define it."
"Today, many of the people in the cultural world are facing severe distress, and there seems to be no one who intends on answering. The foundation we have established is not a charity, it is solely financial aid for the benefit of present and future activity," he continued.
"Culture and art are essential to our spiritual existence and so we have to look after them for the benefit of the day after the pandemic," Huldai emphasized.
Dr. Hila Oren, CEO of the Tel Aviv Foundation said, following the announcement, that "the outpour of support from Israeli philanthropy is exciting - sixty percent of donors to the Relief Fund live in Tel Aviv themselves."
"We invite everyone who can to join the realm of mutual responsibility and to assist the municipality in helping with the artists whose primary sources of income have been damaged."