A final episode, a fourth season and a new biopic 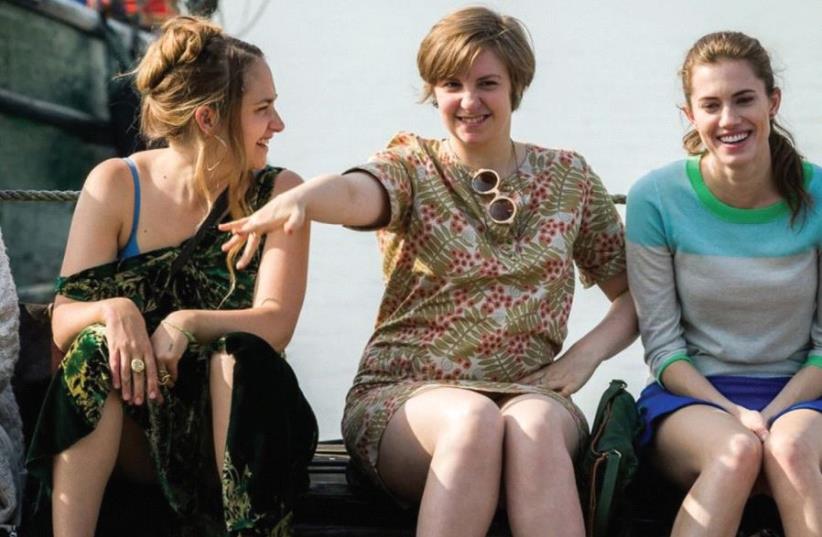 ‘Girls’
(photo credit: PR)
Advertisement
The series ‘Girls’ has come and gone. The last episode, which featured Hannah (series creator Lena Dunham) having a predictably hard time taking care of her baby, was an anti-climax. It didn’t circle back to the amazing pilot episode of the show, in which Hannah set the tone for everything that was to come over the past six seasons, begging her parents not to stop supporting her financially because she was pretty sure she was “The voice of my generation or a voice of a generation.”The lackluster finale aside, Hannah was right. In many ways, Girls was the voice of a generation that no one wanted to acknowledge – young college graduates struggling to launch in a way that no one ever had before. The show was like the anti-Friends, anti-Sex and the City. Yes, it was about four young women in New York, but these characters did not easily find jobs or freelance gigs that allowed them to live in Manhattan and wear designer clothes. The girls of Girls lived way out in Brooklyn, struggled (and usually failed) to turn unpaid internships into paid work and had no health insurance. The men in their lives were just as confused and directionless, sometimes even more so. And, perhaps the most telling difference between Girls and other shows that feature young friends in New York, their struggles didn’t ennoble them. For every moment that the heroines linked arms, there were two when they snapped at each other, and that’s reality. That made it more satisfying when they did find solace in each other, but it also felt right when they drifted apart.Another two points about the series. Dunham drew a great deal of criticism for appearing nude. People were shocked and offended by seeing her slightly chubby body. Don’t get me wrong: I understand that nude scenes are not for everybody, and if you don’t want to see nudity, you shouldn’t watch this show. But the fact that people were horrified by seeing a woman nude who didn’t happen to look like a model is just bizarre, and I guarantee that the next time you are in a crowded room, at least half the women there will have bodies pretty similar to Dunham’s.It’s also interesting that the careers of the actors on the show have skyrocketed, particularly Adam Driver, who got his break playing Hannah’s on-again, offagain boyfriend and who has gone on to star in the new Star Wars franchise, as well as in movies by Martin Scorsese, the Coen brothers, Jim Jarmusch and Steven Spielberg. The biggest change in shooting the final season, the show’s producers have said, was keeping his fans at bay. I hope we’ll continue to see a lot of the other actors on the show. Allison Williams (Marnie) is starring in the hit political horror film (yes, there is such a thing) Get Out, and Zosia Mamet (Shoshanna) is playing Patti Smith in the upcoming Mapplethorpe biopic.Love it or hate it, television will never be the same after Girls. You can still catch Girls on HOT VOD and YES VOD.Silicon Valley, the hilarious series about guys struggling to make it big in hi-tech, is back for its fourth season. It’s airing on HOT VOD and YES VOD now and on HOT HBO on Mondays at 10:30 p.m. and on YES Oh on Wednesdays at 11:15 p.m. Based on this season’s first episode, it’s going to be another season of professional heartbreak and biting social satire.Oprah Winfrey gives an amazing performance in the factbased HBO movie The Immortal Life of Henrietta Lacks. It starts airing on YES VOD on April 23 and on YES 3 on April 25 at 10 p.m., and on HOT VOD and HOT HBO on April 29 at 11:45 p.m. It’s the story of the daughter of the title character, whose cells were used for research without her family’s knowledge, and how that legacy shaped her life. It’s a powerful story, and Winfrey is so good that at times you will forget she’s Oprah.