Somewhere in the middle of Brian Wilson’s performance at the Ra’anana Amphitheater, two terrorists were shooting up the Sarona Market a few miles away in Tel Aviv. 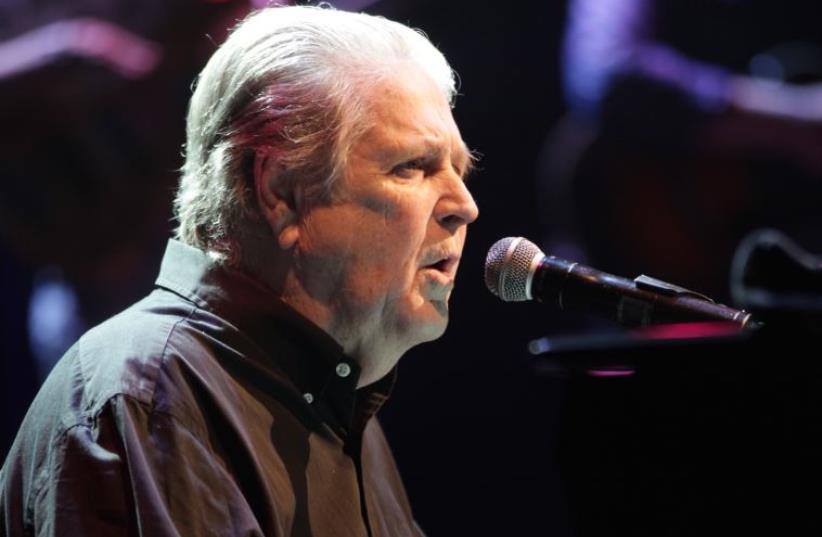 Brian Wilson performs at the Ra’anana Amphitheater, June 8, 2016
(photo credit: PR)
Advertisement
Somewhere in the middle of Brian Wilson’s performance of The Beach Boys’ 1966 groundbreaking album, Pet Sounds, under a starry sky at the Ra’anana Amphitheater on Wednesday night, two terrorists were shooting up the Sarona Market a few miles away in Tel Aviv.You could see some of the middle-aged capacity crowd shift their cell phones from filming the 1960s legend – who was singing the album’s enduring standards like “Wouldn’t It Be Nice” and “God Only Knows” – to checking their messages or news updates.And then, as if their internal thought process was on the surface, you could almost see them deliberating whether to focus on the stark reality that is Israel today taking place outside the sloped, fenced-in grassy area, or the majestic fantasy taking place within. Except for a few isolated cases, it looked like the latter ruled.The gingerly walking Wilson peppered the crowd with a continuous “Toda, Israel,” as he ensconced himself behind a black grand piano like a fortressed shelter, to protect him from the unknown and faceless crowd staring at him in a combination of wonderment and adoration.Leading off with a rousing “Heroes and Villains,” Wilson and company offered a pleasing opening set of Beach Boys classic nuggets, from “Dance, Dance, Dance” to “Little Deuce Coupe.” The huge band – looking more like an orchestra bolstered by co-founding Beach Boys guitarist and cheerleader Al Jardine and longtime family associate Billy Hinsche on keyboards – didn’t miss a tympani, xylophone or castanet cue as they diligently sparked to life with energy and grace the Spectoresque studio sounds in Wilson’s vision.They compensated for their front man’s sometimes unfocused or slightly off-key singing, glossing over the rocky parts with soaring Wilson-arranged harmonies and musical accompaniment. Wilson alternated lead vocals with Jardine and Jardine’s son, Matthew, who provided the falsettos on tunes like “Don’t Worry Baby” that Wilson could no longer reach.The only head-scratching moments in the crowd-pleasing set were the curious inclusion of the novelty ’60s hit “Monster Mash” led by the band’s ‘semi-conductor’ and versatile wind instrumentalist Paul Von Mertens; and the funky, extended version of the Beach Boys’ mid-’60s stab at r&b, “Wild Honey,” led by longtime band associate Blondie Chaplain and his out-of-place, overly long Princed-up guitar solo (he made up for it with a sterling rendition of “Sail on Sailor,” on which he was the original vocalist in its 1973 recording).Without ceremony, Wilson announced that the band was going to perform Pet Sounds, and he immediately launched into the bouncy “Wouldn’t It Be Nice?” Like with any 50-yearold album, some of it is going to stand the test of time, like the lush introspective ballads “You Still Believe in Me” and “I Just Wasn’t Made for These Times.”But some, like the instrumental title track (which Wilson introduced as having “no voices”), sounded like they belonged in the ’60s. Nevertheless, Wilson and the band performed like a tightly meshed unit, faithfully recreating the album with its lows and with some amazing highs.Back in the mid-1960s, Wilson told an interviewer that Pet Sounds’ aborted follow-up, Smile, was an attempt to create a “teenage symphony for God.”Despite the lulls and occasional meandering path, his performance of Pet Sounds in Ra’anana – especially the sublime renditions of “God Only Knows” and “Caroline, No” – was ample proof that those symphonies are just as relevant and goose-bump producing for adults as well.At its conclusion, and with the band’s return for an encore, it felt like school was out and it was time for the fun to begin.And with the iconic strains of “Good Vibrations” wafting across the sultry air, the band and the audience let go and danced through the songs that would keep them away from the news outside – “Help Me Rhonda,” “Surfin’ Safari,” “Fun Fun Fun.”Elated and exhausted, the crowd headed for the exits aware that their shared experience was at an end, but that even at times of despair and grief, they had just received a priceless gift: they could regain a semblance of serenity simply by closing their eyes and hear come to life those sounds that Brian Wilson once heard long ago in his head. He kept thanking the crowd, but it really should have been the other way around.