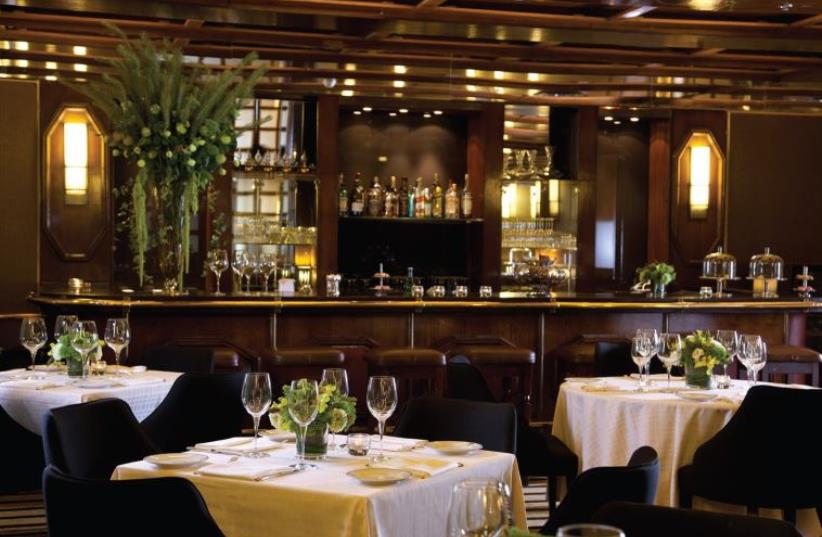 The Accad
(photo credit: Courtesy)
Advertisement
• By BUZZY GORDON The Dan Hotel chain is arguably Israel’s most prestigious, and its flagship King David Hotel’s La Regence is one of the country’s finest restaurants, but its hotel on the Herzliya beachfront has lacked a fine dining restaurant until recently. Finally, several months ago, the Dan Accadia moved to rectify that situation by opening The Accad, under the stewardship of executive chef Ariel Porat.The Accad, which is yet to be signposted, is very small and unassuming, although nicely appointed, with an opulentlooking bar that is minimally stocked. The wine list, which features exclusively Israeli wines (with the exception of one French champagne), is similarly limited.There is a short Recommended section, with just one of those five wines available by the glass (NIS 55): an excellent Cabernet Sauvignon from Yarden.As we perused the menu, fresh chewy bread was served, accompanied by a mild tomato spread and a very good green tapenade. The entire menu, whether in Hebrew or English, is contained on one page, with not a single vegetarian option among the four starters and five main courses. There is, however, one salad at least (NIS 49) – a nice mix of endive, lettuce, walnuts, herbs and radishes sliced so thinly it is translucent, dressed with a pleasant mustard vinaigrette.We started with the sesamecrusted tuna (NIS 67), a visually stunning dish that heralded a larger-than-usual appetizer. The seared edges of the red tuna were generously studded with white and black sesame seeds, while the morsels of fresh fish alternated with slices of eggplant, cherry tomato and olives. Dollops of creamy tehina and garnishes of green chili completed the picture. The tuna needed the help of the vegetables and sesame cream, but all together the interplay of flavors was very successful.The goose liver buns (NIS 85) were an Asian-inspired appetizer: a pair of round sandwiches containing a tranche of goose liver, bean sprouts and ground peanuts.The tangy five-spice dressing cut the richness of the liver just enough to make this a tasty, nicely balanced dish.The sole soup on the menu was chicken soup with entrecote kreplach (NIS 45). The thin broth was akin to a consommé and merely the repository for the plump kreplach, which were filled with high-quality beef. Those kreplach were as good as Mom used to make.For the main course, my companion chose the sea bass fillet (NIS 225), while I opted for the grilled lamb chops (NIS 165). The former was stuffed to overflowing with herbs and cooked perfectly, the white flesh under the skin moist and succulent and completely devoid of bones. The side dish of al dente lima beans drizzled with olive oil was a nice complement.The three lamb chops were of the large variety and grilled medium, with a thin ribbon of pink in the middle of the tender meat.They were barely seasoned, although the garlic cream helped some. The side of roasted vegetables consisted primarily of scalloped potatoes, which were a bit on the salty side.There were four desserts (each NIS 39), and the two we chose were sumptuously presented, even if they deviated slightly from their descriptions on the menu. The chocolate nemesis was decadently rich and nicely accented with a nougat cream (replacing what was billed as Ferrero Roché sorbet).Toasted hazelnuts added both welcome crunch and extra flavor.The strawberry soup featured an island of meringue in a sea of red, in which floated chewy cubes of cherry gelatin candy (substituting for the advertised almond sponge). This cool delight was sweet and refreshing, making the final courses the best value of the evening.

The writer was a guest of the restaurant.The Accad
Kosher
The Dan Accadia Hotel
122 Ramot Yam, Herzliya
Tel: (09) 959-7070
Advertisement
Subscribe for our daily newsletter