The Aprons get out of the kitchen

Having just released their second album in English, the Israeli ‘dream pop’ duo are ready to take on the world. 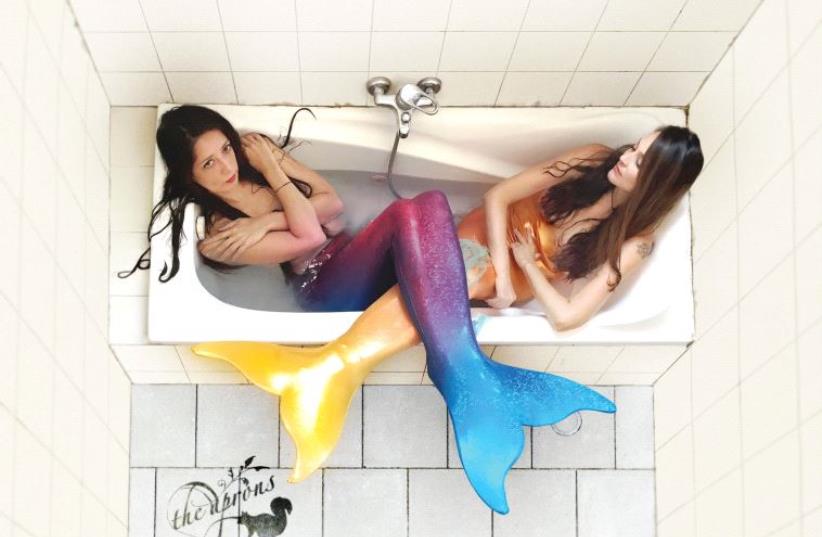 ‘WRITING SONGS is the fun side of what we do... some of the other stuff is more like hard work. But we make music because we love it,’ says The Aprons’ Talia Peri (left), seen here with musical partner Hava Coen.
(photo credit: VLADA KIRILOVE)
Advertisement
The Aprons twosome are a contrary experience. It starts with the band name.“We went for Aprons, you know, the symbol of the ‘perfect woman’ who makes great food but, the truth is, we’re both hopeless at cooking,” says Hava Coen. “It’s sort of reverse psychology,” she adds with a laugh. “We sort of compensate for being bad in the kitchen with the band name.”Coen and cohort Talia Peri have just released their second album, after a four-year hiatus, called Any Human Heart. The lyrics of all nine tracks are in English and make for atmospheric and mood-inducing listening.The duo call their musical style “dream pop,” and there is definitely something ethereal, possibly tinged with psychedelia, about their artistic mindset.Whatever their take on the way to go about making music, Coen and Peri clearly share plenty of common ground. Any Human Heart, which was officially unveiled at a gig at the HaEzor club in Tel Aviv a couple of weeks ago, and will get another airing when the duo opens for rocking, spacey Mexican outfit Lorelle Meets The Obsolete on October 4 at the Ozen Bar in Tel Aviv.The Aprons will also feature in the rock and world music slot of this year’s International Showcase, in November, which they hope will open a few doors overseas.“We really want to make the most of that opportunity,” says Peri. “We’d like to get out there, to Europe and other places around the world.”They certainly have something to offer, and you get the sense that the two women are not just professional colleagues but good pals too. That is evidenced both by their seamless sonic synergy and their personal track record.“We have been together as The Aprons for seven years, and we have known each other for 15 years,” says Coen. “When I first met Talia she was a member of a group called Elliot.”“The band was named after Elliot the Dragon,” laughs Peri, referencing the Hebrew moniker for Disney character Pete the Dragon.It was a smooth starter. “I had just started learning to play the drums, and we decided to start jamming together,” recalls Coen. There was plenty to jam with. “I played piano, bass and drums,” says Peri.“Talia plays classical music, she’s really good on piano. I played piano a few years but I can’t say I’m a pianist, as such,” Coen notes demurely.Initially, it was a predominantly percussive affair, with Coen and Peri searching for a common creative language on bass and drums.“Later we added piano,” says Peri, noting that there was more than a modicum of melodic intent in there too. “I played melodies on bass,” says Peri.“There were quiet bass riffs. And the drums, too, were more gentle,” Coen tacks on. “It was less rock and roll. It was more delicate.”Any Human Heart is shot through with delicacy, both in musical and lyrical terms. The opening track, “Fear of Heights,” for example, posits a thoroughly optimistic take on life. The first stanza goes thus: “If you have a fear of highest, climb the highest mountain you can find. Don’t bother to look down, don’t lose your mind.You will find out you are all right.” Now, if that isn’t enough to cheer you up, I don’t know what is.Coen and Peri may have taken a melodic approach to their drums and bass, but the choice of instruments meant that their sonic explorations veered toward the lower registers. True to their obverse-reverse equilibrium ethos, the nether-region instrumental substratum was overlain by vocals that tended toward the top end of the musical stretch. That is generally the case on the new album too. Take, for example, “You Her & Me,” on which the twosome, plus assorted sidemen, lay down a multi-textured foundation before entering the fray with their typically airy vocals. It puts one a mite in mind of 1960s-’70s New York rebel rock band Velvet Underground, and their stint with nymphal singer Nico.The positive thread to the lyrics on the new album is, says Coen, a reflection of where the two women are at now.“We have softened since the first album [Sound Stains]. We accept changes more easily now.”Sound Stains, angelic vocals notwithstanding, is an altogether darker offering.“We used to be more obstinate,” Coen continues.“We’d object to any suggestion of adding guitars, or other instruments. But we are more open now, but it still has to fit in with what we call our sound. We added a harp, more guitars and a few electronic touches.”“Yeah, the first album was basically, bass, drums and piano,” Peri interjects. “I’d say there’s something softer, and more accommodating, even comforting about the new CD.”Part of that new-found laissez faire involved allowing someone else to place their hands on the production helm for Any Human Heart. Mind you, we are talking about a very capable and seasoned pair of hands, belonging to acclaimed 42-year-old singer-songwriter Noam Rotem.“He added so much to this whole project,” notes Peri.“And he plays [guitar] on the album too.”Drummer Hagai Fershtman and Gilad Weiss, on various stringed instruments, contribute their polished penny’s worth to the proceedings too.But, even with the extra personnel, Any Human Heart is still Coen and Peri’s baby. Staying with the familial analogy one could say that the twosome enjoy a happy professional marriage.“We both write, and we sometimes finish off each other’s work, if one of us, for example, gets stuck with a song,” says Coen. “It works well for us.”Some artists – generally the female ones – liken the creative process to labor pains, but Coen and Peri say their songwriting follows more pleasurable lines.“Writing songs is the fun side of what we do,” says Peri. “Some of the other stuff is more like hard work. But we make music because we love it.”

For more information about The Aprons’ upcoming shows: (03) 621-5210 and https://theaprons.bandcamp.com/
Advertisement
Subscribe for our daily newsletter