The art of motherhood

Israeli painter and installation artist Khen Shish talks about how becoming a mother at a late age has impacted her creative process. 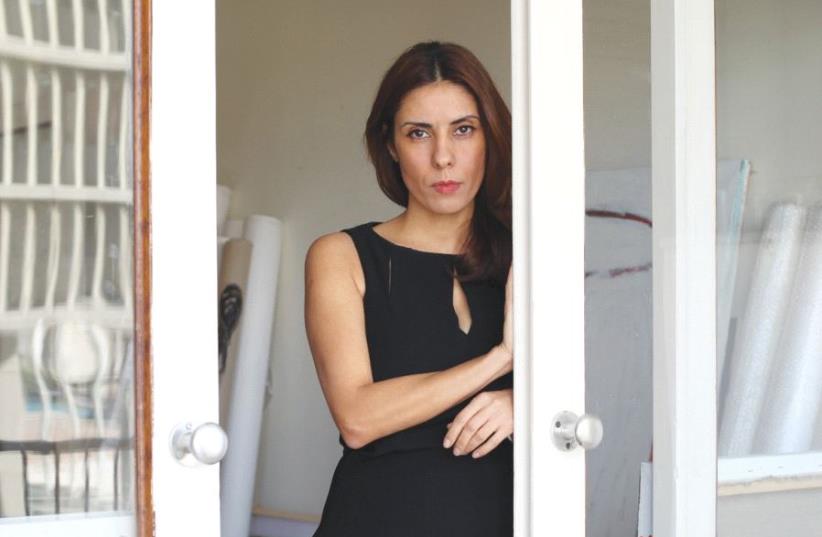 ‘ALL MY paintings have layers to them, including layers you don’t get to see... I like having some underlying history. Anyway, even if you don’t see what I painted underneath, you sense it. Otherwise my paintings would be flat,’ says local artist KHEN SHISH’S ‘The Eagles 2010.’ (Yigal Pardo) Khen Sh
(photo credit: URI GERSHUNI)
Advertisement
Khen Shish is something of a throwback to a possibly more gently paced, less virtual, more hands-on era. When we met recently at a Tel Aviv cafe I was intrigued to see her less-than cutting-edge cell phone on the table.“I like reading a real newspaper, not on a computer,” she says. “I want to feel and touch life, and not pass by it.”Shish is brimming with wholesome energy, and is clearly fired up to get her ideas, perception of the world around her and emotions out of her head and heart and onto the canvas, paper or whatever surface she chooses. Her larger- than-life persona also seems to demand a similarly proportioned physical substratum for her work, and she has produced quite a few expansive paintings over the years.A fascinating video of the creative process involved in producing a large painting, in Paris, a couple of years ago shows Shish’s modus operandi as she intermittently ponders her next steps before returning to the job in hand and addressing another part of the paper. Intriguingly, we also get to see how she sometimes covers over various elements of her initial ideas with new layers, often completely deleting earlier efforts.“All my paintings have layers to them, including layers you don’t get to see,” she remarks.“I like having some underlying history. Anyway, even if you don’t see what I painted underneath, you sense it. Otherwise my paintings would be flat. You see the questions and the doubts I have during the process. I think that without the history, it’s not interesting.”Shish’s oeuvre to date features quite a lot of monochrome figures and abstract tracts which, somehow, also exude a sense of polychromy.“In the last few years there has been more color in my work,” she notes. Red is certainly making its presence felt these days, for example in a highly expressive painting called Your Tears Kill Me, and acrylic on canvas creation from 2013, and the same color proves a highly effective foil for the otherwise black-and-white 82 Ibn Gvirol produced in the same year.In fact, a far more momentous change occurred in Shish’s life just over four years ago, which affected her deeply as a person and, hence, as an artist. Becoming a mother at a relatively late age, she says, has impacted on her mindset, and on the way she goes about her creative business.“I had a baby at the age of 42. If, say, I’d become a mother when I was 22, I wouldn’t have been an artist now.”While many people adopt a very different lifestyle on becoming parents, Shish says having Tamar-Louise just made her more efficient, and also confirmed her artistic credentials, in case she had previously doubted that.“At the age of 42 I knew I was on the right track with my art, and that it could not be taken away from me. It came naturally to me. So, instead of working from 8 a.m. to 8 [p.m], or midnight, or just keeping on going until I decide to stop, today I know that I stop working at 4 p.m.”Having her daughter to care for, says Shish, has made her more focused.“It has imposed order on my working day. Now I can’t spread my work around the clock.”Still, there are contingency plans.“There are some days, say when I’m coming up to an exhibition, when I have to work more intensively, and I feel the muse is with me.That’s no problem, I can ask friends to pick my daughter up from the kindergarten, or my mother takes [her].”In an interview Shish gave on Channel 10 TV in 2014 she said “art is my life.” She says motherhood hasn’t changed that, but she somehow manages to give both her art and her daughter top priority.“My daughter comes first, but so does my art. For me they are one and the same. Both are natural to me.”That sounds well and good but, surely, being a mother has changed Shish and, hence, how she approaches life and her expression thereof, through her art.“I don’t bring something different to my art now, I bring something more,” she declares.Shish talks at rapid-fire pace, almost as if she is struggling to cope with torrents of ideas that come to her simultaneously.That energy comes through in her paintings. You sense the high energy in her brush strokes, but there is also plenty of delicacy, often bordering on fragility, in there too. Her work seems to encompass a world of ideas, styles and emotions.A self-portrait she made shortly before becoming a mother, for instance, incorporates brisk brushwork with some evidently on-the-fly applied lines. The pink backdrop infers some tenderness in her intent, while the somewhat surrealistically expressed facial features come from a very different point on the stylistic and emotional spectrum.Shish even manages to do humor, with subtle winks evident in, for example, Photogenic Heart, created in 2012-13.There is power in Shish’s work – some of it pretty feral – allied with sensitivity and a willingness to tread into uncharted waters, come what may. With a bio that takes in a residency at the Cité des Arts in Paris, and exhibitions in Washington, DC, Vienna, Slovenia, London and Rotterdam, with a new show opening in Rome in September, Shish appears to be handling the career-motherhood conundrum with the same single-mindedness as she approached her art before her Little Princess came along.