‘The Bank Hapoalim Affair’ Smuggled out of Afghanistan, Ido Michaeli’s carpet is now on exhibit

“Bank Hapoalim Carpet,” part of a trilogy titled “Cloth Merchants,” is the name given to the complete installation and is accompanied by a short documentary outlining the carpet's making. 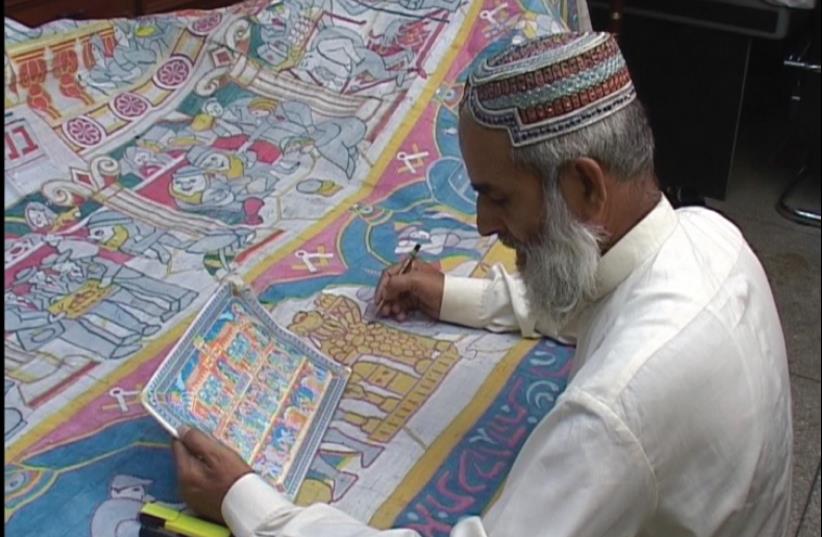 AN EXAMPLE OF Afghani carpets is on display at the Israel Museum in its ‘6 Artists 6 Projects’ exhibit.
(photo credit: IDO MICHAELI)
Advertisement
In 2010, Israeli artist Ido Michaeli made some preliminary drawings for the design of a wall-carpet. With the assistance of Yitzhak Mattat, an Israeli rug merchant, said carpet was made in and smuggled out of Afghanistan and is now on display in the Israel Museum’s “6 Artists 6 Projects” exhibition, one of the museum’s special exhibits to mark it’s 50th anniversary.“Bank Hapoalim Carpet,” part of a trilogy titled “Cloth Merchants,” is the name given to the complete installation and is accompanied by a short documentary outlining some of the processes involved in the carpet’s making and an app that helps the viewer decipher it.Michaeli creates artworks in a variety of mediums, although the use of fabric is a constant in his output.In 2011 he fashioned a mannequin based on the Jewish philosopher Maimonides and dressed it in a jellabiya, a traditional Arabic garment. The following year he exhibited a model of the Ark of the Covenant that featured a decorative parochet – a Torah Ark curtain – hand-embroidered at an Ethiopian workshop in Lod.Ethnographic issues pertaining to Middle-Eastern culture and a concern with the economic structures involved in the production of art, particularly at a local level, are just some of the themes Michaeli explores in his installations.Michaeli’s challenge was to find somebody who could custom-make a high quality carpet based on his drawings. Enter Yitzhak Mattat, an Israeli carpet dealer who by Michaeli’s reckoning has a network of agents and contacts that would be the envy of any fixer.“Mattat has connections in Afghanistan and several other countries. He contacted traditional rug weavers in Kabul who agreed to make the carpet. The arrangement was made despite the fact there are no diplomatic relations between the two countries,” said Michaeli.The relationship between Mattat and Michaeli played a significant part in a project that lasted for the best part of five years and was the cause of no little angst for the artist.“The process was done in stages and at times nerve-racking. They would send me a photograph of a completed segment of the carpet, then receive payment and begin work on the next stage, and so on.“Because of war or internal strife in Afghanistan contact would occasionally be lost for months at a time. I had a few sleepless nights.Matatt has this vast network of middle- men and eventually the carpet was completed and smuggled out in among traditional Persian carpets, so customs agents would not see the Hebrew lettering, by way of Pakistan and Turkey,” Michaeli explained.The carpet is a vividly colored, dense weave of more than one hundred images, most of which are set inside a representation of the bank’s edifice.The arrangement of the figures indicates a hierarchy. On the top level are powerful and influential European and Israeli Jews from twentieth century history, all of whom played a part in the political, literary and business life of the nation.In the center row are the middle class, and on the lower level are the working classes, represented by figures engaged in various kinds of manual labor and pursuits of a criminal nature.Arranged throughout each level are references to Soviet, Israeli and Renaissance art, archaeological objects and images gleaned from Israeli currency and postage stamps.Taken as a whole the carpet is a multilayered and absorbing mix of ideologies, cultures and symbols, reflective of some of the complexities, past and present, in Israeli society.Visually, the imagery might appear convoluted. Yet the more one explores the details, with the aid of the app, the more the meaning of this Byzantine yarn reveals itself.Bank Hapoalim, literally translated from the Hebrew as “the workers’ bank,” was established by the Histadrut (the Israeli congress for trade unions) and the World Zionist Organization. The bank was seen to identify with the socialist ethos that infused the early years of the state, but was taken over by the Arison Group in 1996.All the figures on the upper level of the carpet are male Ashkenazim, most of whom played a significant role in the elaboration of Zionist and socialist thought in Israel. Theodor Herzl and David Ben-Gurion are placed alongside Nachman Syrkin, the founder of socialist Labor Zionism, and Berl Katznelson, one of the founders of the Histadrut.Located on the lower level is the only figure of repute from Mizrahi culture,Yitzhak Drori, an underworld figure who orchestrated a break-in at one of the Hapoalim branches.The carpet’s composition is laden with socialist and Zionist imagery, rendered in the style of Russian poster art. Michaeli sees the workers, including those in the documentary who are testament to the craft of carpet weaving, as the leading characters in the piece.Is the carpet a tribute to the worker? A play on power relations? Or an artful dig at the bank itself? And how does Michaeli see his role in the affair? “In fact, I acted like a capitalist entrepreneur, while on the face of it the carpet looks like a communist manifesto. The sources it draws on are related to the historical connection between European Jewry and communism,” he remarked in a conversation with Aya Miron, the project’s curator.The visual representations of those sources – the venerated Ashkenazi figures, the hardy workers, and the socialist and Zionist emblems and motifs, all sit within the carpet – an artifact with a rich, Oriental tradition.