“The human ear is an incredible radar system, people will be able to perfectly hear every single detail in the Crusaders fortress.” 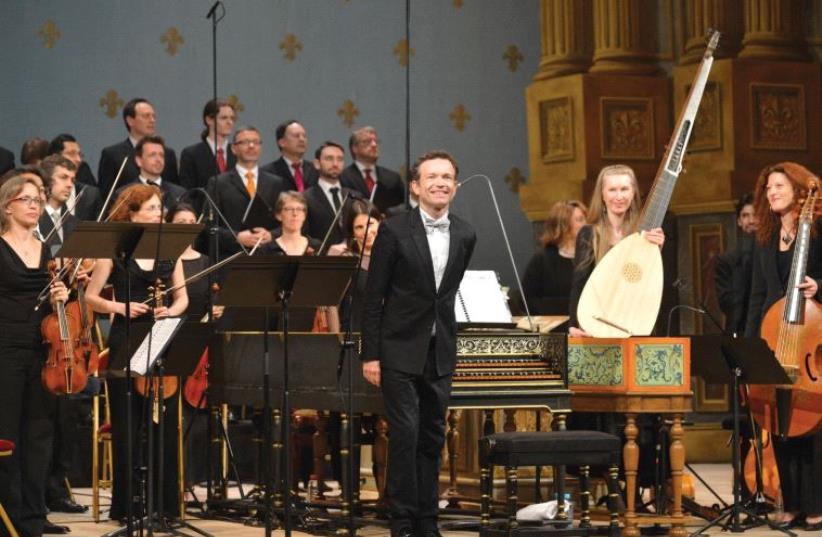 FRENCH HARPSICHORDIST and conductor Christophe Rousset together with his ensemble, Les Talens Lyriques.
(photo credit: JACQUES VERREES)
Advertisement
This month, acclaimed French harpsichordist and conductor Christophe Rousset will bring his ensemble, Les Talens Lyriques, to Acre’s Crusader fortress for the inaugural two-day Baroque Opera Festival.The festival is being put on as the artistic program complementing the first Meet in Galilee economic forum.Rousset, who studied harpsichord at La Schola Cantorum in Paris and the Conservatoire Royal in The Hague, founded Les Talens Lyriques in 1991. The group specializes in baroque pieces and uses baroque-period instruments. The performance has been a long time in the making.Because the group prefers to perform unamplified, Rousset and the group came to Acre last year to make sure the acoustics would be suitable.“We are not a rock band,” Rousset told The Jerusalem Post. “The human ear is an incredible radar system, people will be able to perfectly hear every single detail in the Crusaders fortress.”Israeli singers Anat Edri, Yair Polishook and Daniela Skorka will perform alongside Rousset and the ensemble. Rousset calls them “very promising young singers, with good voices, strong techniques and already active internationally.”The Israeli vocalists and Les Talens Lyriques have already performed together, at the Beaune Festival in the Burgundy region of France, and will be continuing their collaboration after the Acre festival at the Theâtre des Champs Elysées in Paris next October.“They possess exactly what I am currently searching for: fresh voices with very nice color and flexibility, and above all, the ability of doing what the conductor asks for,” Rousset says.The first night of the festival will feature Marc-Antoine Charpentier’s opera Acteon and Henry Purcell’s Dido and Aeneas and the second night will feature selections from George Friedrich Handel’s Alcina.Rousset chose the pieces alongside with Muriel Haim, the festival organizer. They decided that Alcina and Dido and Aeneas would be fitting operas given that both have their plots based in the Middle East.The performance of Alcina will be accompanied by original video art created exclusively for the performance by acclaimed American artist Naomie Kremer, who is of Israeli descent. The videos will be screened onto the centuries-old stone walls of the fortress and will illustrate the magic islands, knights, fairies and exotic animals that appear in the opera.Rousset paints a balmy picture of his hopes for the performances.“My perception of the [fortress] is quite similar to our Avignon Festival in the Palais des Papes: very old stones, full of history, giving an exceptional frame to a memorable evening with the magic of peaceful night, stars above and refreshing breeze blowing softly on singers’ dresses.”

The Baroque Opera Festival takes place September 25 and 26 in Acre at the Crusader fortress. For tickets and more information, visit www.meetingalilee.co.il.
Advertisement
Subscribe for our daily newsletter