Four decades after making a splash with The Flash, the New York-born, 63-year-old ‘crazy’ grandma is back to strutting her stuff on X-Factor. 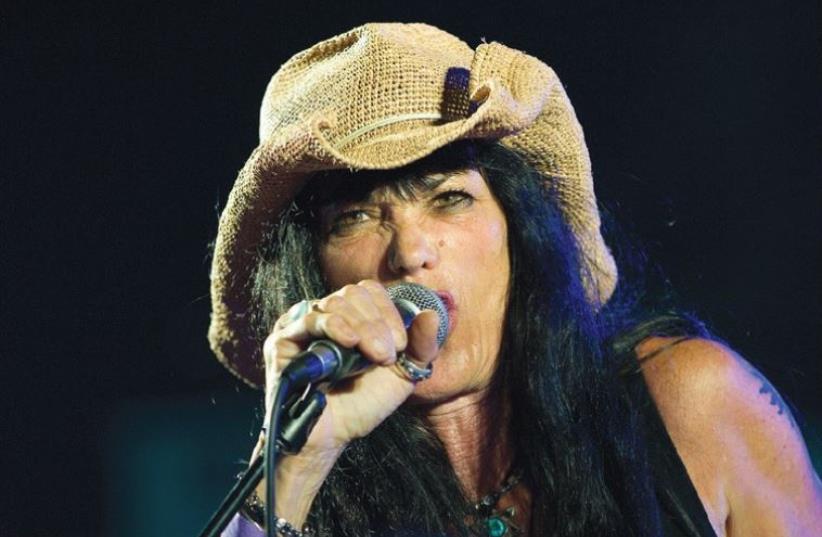 LIBI AND her Flashback band
(photo credit: YEHOSHUA HALEVI)
Advertisement
Amid the teen pop wannabes, the Mizrahi crooners and polished rockers sparring for recognition on this year’s Israeli version of the X-Factor, there is one contender who stands out.Libi Hart – known for decades to a predominantly Anglo, music-loving audience in Israel as simply Libi – startled the judges, especially Rami Fortis who remembered the gravelly-throated blues-rock belter from their days rubbing shoulders at Tel Aviv punk clubs like the Penguin in the 1980s.The years have not weakened the 63-yearold grandmother’s vocal prowess; she slammed through versions of tunes like “The Shoop Shoop Song (It’s in His Kiss)” and “Wild Horses.” She played the rock star to the hilt, and she maintains that persona offstage too, combining a Ramones-style New Yawk accent with a healthy dose of yiddishkeit and tenderness.As she descended from the Egged bus in Jerusalem recently, Libi was instantly recognizable.Tanned, clad in a black tank top and black cutoffs, with metal chains hanging from her front pocket to her back left pocket, hair wraps, blue nail polish and bright red lipstick, she resembled a mix between Joan Jett and Chrissie Hynde as she made her way to a radio interview to promote her upcoming appearance at the annual Jerusalem Woodstock Revival, taking place on Thursday night at Kraft Stadium.A natural storyteller in front of a microphone or just talking to a reporter, she opened up about her background that provided tension between her love of rock ‘n’ roll and her observant Jewish upbringing in Monsey, New York.Her father had three main loves in his life, “his love for Hashem, his love for Israel and then his love for me,” she said, adding that her mother would regularly tell her stories from the Torah and about Israel to the point that she described it as “being given Zionism intravenously since birth.”From early on though, Libi’s own love of singing became an overriding issue in her life.“I was always the mommy singer, daughter singer, sister singer, teacher singer, nurse singer, whatever it was I was still the singer,” she said.In 1969, the teenage Libi nabbed a ticket to the original Woodstock concert. But her parents had other ideas. They sent her to Israel to, in her words, “get away from the drug generation and the Woodstock generation.”“I remember being very annoyed,” she said, but as soon as the plane landed in Israel, she felt a change in herself.“The door opened my DNA memory – which I have a huge theory about – and I saw the sky and I smelled something. The tears started coming and didn’t know where they were coming from” she said.A decade later, she moved to Israel with her husband and baby girl. She returned to singing, something she hadn’t done since she was 18, which was a job that allowed her to spend most of the day with her daughter, while still being able to bring in an income.She hooked up with a hard rock band called The Flash, whose lead guitarist heard her sing and asked her to join. In the early 1980s, Libi and The Flash performed around the country almost every night, except for Friday. They received national exposure and won the admiration of fellow rockers like Fortis. But within a couple years, the band broke up in the aftermath of the First Lebanon War.Libi continued to perform, with new accompanist guitarist Ted Cooper, including a regular Sunday night gig at the Jerusalem Cinematheque. However, “life got in the way,” she said, and near the turn of the century, she moved back to the US to take her of her aging mother.After her mother’s death, Libi returned to Israel and began to make music again, this time with guitarist Yossi Tanouri. Together they created Libi and The Flashback, and set the path for the veteran singer to show the young upstarts at the X Factor a thing or two about stage presence and owning a song.Now, however, her focus on music is tempered with a grandmother’s love of her grandkids, whom she calls her “greatest gift.”“When I’m with them, I’m ‘fafa,’ I’m not the rocker, I’m not whatever, I’m a crazy grandma who loves to have my crazy. And that’s all they need from me.”Having returned to music and returned to Israel more than once, Libi was adamant that for this American-born religious rocker, there was no place like the Jewish homeland.And she has nothing but praise for her fellow Americans who have followed suit.“We are all people that have left the American dream that everyone runs to, to the Zionist dream of ‘let’s not be rich, let’s be something else.’ And I think that it makes us extraordinarily special people,” she said.Anyone who makes their way to Kraft Stadium Thursday night to see Libi and The Flashback churn out the greatest hits of The Who, Creedence Clearwater Revival and The Band, will surely see someone extraordinary on the stage.