The eye of the beholder

The photo exhibition ‘Passage to Israel’ renders a heartfelt look at the country. 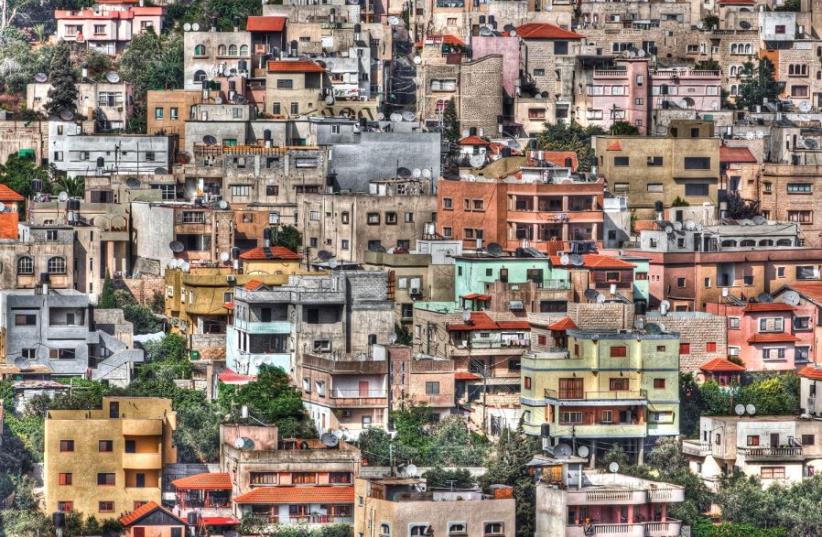 Ammar Younis – Umm El Fahem, Summer
(photo credit: AMMAR YOUNIS)
Advertisement
It is often a refreshing exercise to take a look at the familiar through the eyes of an outsider. So when you read that “‘Passage to Israel’ explores the layered, soulful beauty of the land of Israel,” that doesn’t necessarily mean you are going to be subjected to the same old stock snaps of this fair country when you make your way over to the Jerusalem Theatre. In fact, there are plenty of surprises in the photography exhibition that opened at the prestigious cultural venue last week and will run until July 20.“Passage to Israel” began life in the US as a book with what might be called image-oriented intent.“When the last war broke out in 2014 [Operation Protective Edge], I was shocked by the responses to it,” says Karen Lehrman Bloch, who curated the book along with Kara Meyer and oversaw a subsequent exhibition in New York.“I wanted to put out something beautiful and positive and apolitical about Israel. I wanted to show the beauty and the diversity of the country. I wanted a diverse group of photographers. But I also wanted to show the beauty, and photographs that would touch people emotionally and sort of bypass all the brainwashing and all the lies. That’s how the book happened,” she explains.That sounds like a noble exercise, but it was not all smooth sailing.“It was a struggle to find a publisher, due to the [political] climate,” notes Lehrman Bloch.It seems that the idea of publishing a bunch of photographs of Israel taken by Israelis, however visually striking or emotive they may be, was simply not “sexy” enough.“If I’d had pictures of conflict or if they’d been depressing, I think I would have had a different response,” she says.The images in the Israeli version of Passage to Israel – curated by Noga Arad-Ayalon – dotted around the walls of the Jerusalem Theatre foyer certainly evoke strong responses. The local lineup is a pared-down selection of the works featured in the book, with some telling additions brought in by Arad-Ayalon. One of the most dramatic shots is called “Flood, Zin Valley,” taken by Eli Basri at the southern canyon. It is a nighttime picture that conveys the feral force of desert flash floods. There is a lighting source, just off camera, which enhances the drama ante by picking up sharpedged tongues of water as they rush across the terrain in great torrents. The presence of a lone figure of a man, who appears to be in a hurry to get out of harm’s way, gingerly picking his way across a rock, adds to the compositional and sensorial mix.The local additions include a mesmerizing photo called “The City of Umm El Fahem” by Ammar Younis, which depicts the Arab urban spread as a multi-hued structural mosaic. Younis’s other contribution to the exhibition is very different but similarly imposing. It is a monochrome portrait of 94-year-old Fakhriyya “Araf” Abdallah Younis in which the photographer offers a tangible sense of the subject’s emotional state and the weight and wisdom of her long years.That hangs next to an equally dramatic black-and-white print of the interior of the Ethiopian Church in Jerusalem. Dor Kedmi’s work evokes a sense of sanctity, which is nicely offset in an off-the-cuff manner by the figure striding through biblical-looking shafts of light pouring in through the high window.Naturally, when Arad-Ayalon came on board for the Israeli rendition, the exhibition took on some new angles.“I felt there should be images of places like the Dead Sea and the Negev,” she says. “There are wonderful pictures of those areas and the Arava by people like Doron Nissim and Eli Basri.As an Israeli, Arad-Ayalon was keen for “Passage to Israel” to show off as many aspects of the country as possible and to present us with scenes that would make us, the locals, proverbially sit up and take notice.Itamar Grinburg, a veteran photographer who is best known for his aerial pictures of the country, weighs in with some stunning frames of anemones in the Negev, a cotton field in the Jezreel Valley, and a pop art-looking overhead shot of the Tel Aviv beach strewn with sunbathers. His downward behind-the-scenes look at the Tel Aviv triathlon is just as intriguing.While Jerusalemites are not exactly strangers to snow, it’s a fair bet that not many have ever seen a vineyard blanketed in the white stuff in the Golan Heights. Tzachi Yaffe’s graphically spindly photo conveys that special sense of calm you frequently get in such meteorological conditions, while his snapshot of a mass of migrating cranes in the Hula Valley imparts a sense of congregation, along with some frenetic Mother Nature energy.There is the odd sliver of humor, too.For example, in Udi Goren’s “Purimtime” supermarket scene, Mario Troiani’s “Hearts Graffiti” and Nathan Marko’s shot of a helmeted girl on a scooter in Tel Aviv.With “Snow at the Western Wall” by Noam Chen, Rina Castelnuovo’s mystically intimate “Monastery” and Elad Matityahu’s “Abu Ghosh” – which echoes Basri’s Negev flash flood scene – the exhibition manages to cover plenty of physical and emotional bases.

‘Passage to Israel’ is on display at the Jerusalem Theatre until July 20.
Advertisement
Subscribe for our daily newsletter