The film premiered at the Sundance Film Festival and has been screened this past week at select cities across the United States. 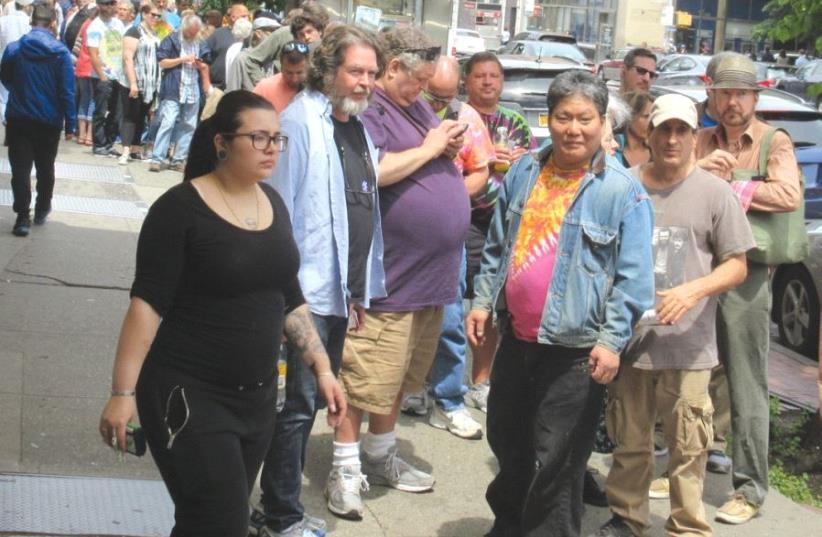 DEADHEADS LINE UP for a screening of Amir Bar-Lev’s docu ‘Long Strange Trip – The Untold Story of The Grateful Dead’ in New York.
(photo credit: HOWARD BLAS)
Advertisement
NEW YORK – In 1978, Deadheads secretly prayed that the Grateful Dead would cross the border from Egypt in to Israel and perform in the Sinai Desert after their three day gig at the Great Pyramid of Giza. Their wish for a miracle never panned out and the Dead never played a concert in Israel – though Jewish Grateful Dead drummer, Mickey Hart, performed in Jerusalem in 2013.Thanks to director Amir Bar- Lev and his new film, Long Strange Trip: The Untold Story of the Grateful Dead, Deadheads worldwide and those who have long been curious about Dead shows and Grateful Dead culture can now experience this world – if they are willing to devote four hours to this important new film, presented in six acts. The film premiered on Sunday night at the UFC Theater in Manhattan in the presence of Bar-Lev, who answered questions from the audience following the screening.The film covers a lot of ground and features interviews with the Core Four (Bob Weir, Phil Lesh, Bill Kreutzmann and Mickey Hart –who are all credited as executive producers), Dennis McNally, the band’s publicist and biographer, daughter, Trixie Garcia; Donna Jean Godchaux (band member from 1972 to 1979), Sam Cutler, the tour manager from 1970 to 1974; girlfriend and later wife, Barbara Meier, and such celebrity Deadheads as Senator Al Franken.Viewers are treated to rare clips and archival images of Jerry Garcia’s teenage years, the band forming and living together in the Haight Ashbury neighborhood of San Francisco, meetings with members of the Rolling Stones, performances in the US and around the world (including the famous Europe ’72 Tour) and even underwater video of Jerry scuba diving in Hawaii.There are many sweet, poignant and historically significant moments throughout the film, including black and white footage of Garcia patiently teaching Lesh and Weir the harmony to the song, “Candyman.” The audience learns all about the Dead’s famous sound system, known as the Wall of Sound, meets Deadheads outside concert venues on Shakedown Street, experiences the rampant LSD culture of band members and fans, and watches Jerry battle lapse into a diabetic coma, battle drug addiction, and ultimately die of a heart attack at age 53 in 1995.A particularly interesting theme of the movie was Garcia’s fascination with the 1948 film Abbott and Costello Meet Frankenstein. Garcia notes that the movie both delighted and terrified him; he first saw it as a child at age 5, just after his father died.The film premiered at the Sundance Film Festival and has been screened this past week at select cities across the United States. The film arrives to Amazon Prime Video on June 2. Footage of camels, Jerry Garcia and band and Deadheads at the pyramids may been seen approximately 2-1/2 hours into the film.Bar-Lev, son of Israeli parents, got into the Grateful Dead growing up in the 1980s in Northern California. He playfully notes that it took 14 years to create the film. “Getting the Core Four on board was a process of do, die, do again, die again – for eleven years! I always wanted to make the film. It was pure persistence.” He continues, “We set out to make a 90 minute film – but at two hours, we were only at 1974, so we went back to our financiers!” Bar-Lev’s other films include The Tillman Story about the NFL star-turned-US Army ranger Pat Tillman, My Kid Could Paint That, and Happy Valley, a film about the Penn State Jerry Sandusky Scandal.