The EMET Prize is given "for excellence in academic and professional achievements that have far-reaching influence and make a significant contribution to society." 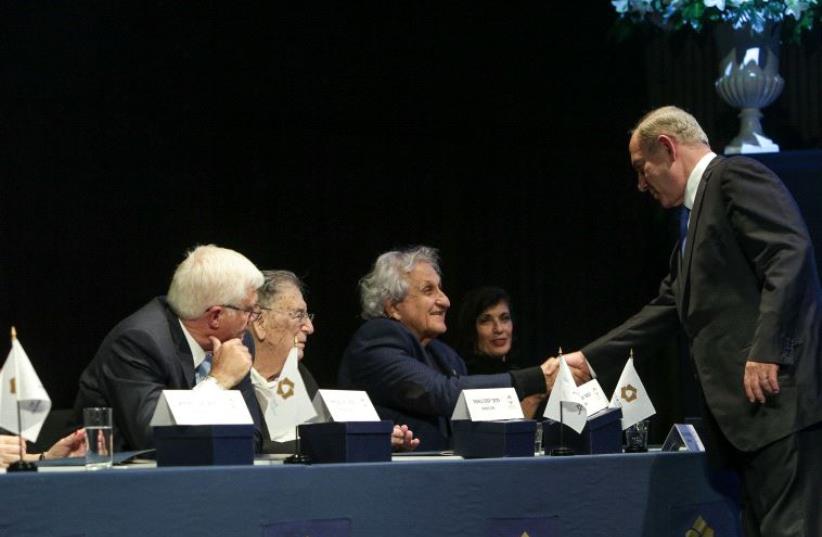 PRIME MINISTER Benjamin Netanyahu congratulates 2016 EMET Prize laureates in Jerusalem last month.
(photo credit: DAVID SALEM-ZOOG PRODUCTIONS)
Advertisement
Nominations are open for the million-dollar 2017 EMET Prize for Science, Art and Culture, it was announced on Sunday.The prize, which has been dubbed the “Israeli Nobel,” is given “for excellence in academic and professional achievements that have far-reaching influence and make a significant contribution to society.” It is sponsored by the A.M.N. Foundation for the Advance of Science, Art and Culture in Israel, under the auspices of the Prime Minister’s Office.This year’s awards, according to a press release from the A.M.N. Foundation, will be given in the following categories: cancer research, computer and electronic engineering, philosophy, the economy, as well as acting and directing.Nominations can be submitted via the foundation’s website, www.emetprize.org, with the deadline set for April 20.The goal of the A.M.N. Foundation “is to acknowledge those who view excellence as a way of life and the fulfillment of human potential as essential to creating a better world for future generations.”The awards, which are administered by a committee comprising representatives appointed by the prime minister and the A.M.N. Foundation, are given to Israeli citizens and in certain circumstances, to non-citizens who consider Israel their permanent home.The A.M.N. Foundation was founded in 1999 by Alberto Moscona Nissim, a Mexican Jewish philanthropist who was born in Bulgaria in 1916 and died in 2008, with the goal of promoting the Zionist enterprise.The recipients of last year’s prizes, awarded by Prime Minister Benjamin Netanyahu at a ceremony in Jerusalem last month, included Prof. Yehuda Bauer for Holocaust research, Prof. Haim Sompolinsky for brain research, Profs. Joseph Bernstein and David Kazhdan for mathematics, Profs. Zahava Solomon and Rami Benbenishty for social work, and authors A.B. Yehoshua and Ronit Matalon for Hebrew literature.Click here to submit a nominee