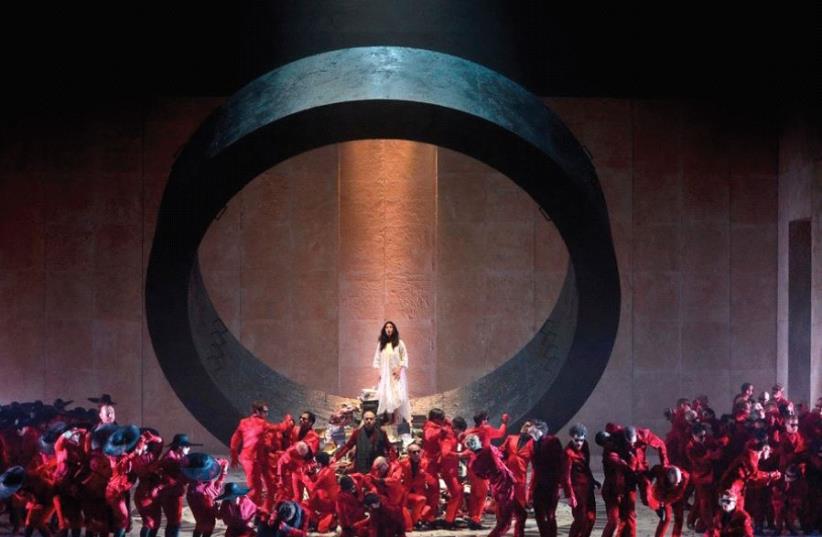 DEVIL IN the details: Israel Opera’s production of ‘Faust.’
(photo credit: YOSSI ZWECKER)
Advertisement
To the great good fortune of Goethe, the German poet who wrote the tragedy Faust, he was not alive when Gounod’s opera Faust was performed.Goethe’s profound philosophical drama is turned in the opera into a kitschy sentimental melodrama. The opera’s redeeming feature is Gounod’s glorious music, including unrivaled masterpieces such as Mephistopheles’ aria “The Golden Calf,” Marguerite’s “Jewel Aria,” Valentin’s “Farewell Aria,” the “Soldiers Chorus” and more.The lead hero in Stefano Poda’s direction and sets was a tire-like circle, in and out of which anything could happen or not happen, mercifully leaving much to the audience’s imagination – except for Faust and Marguerite’s seduction scene, where imagination was superfluous. The circle’s main function was to declare: “Look how original I am.”In the singers’ lead role, Gaston Rivero, as Faust, was a credible lover, developing from initial indifference to final intensity. One could well understand Marguerite’s falling in love with him in the absence of a more exciting tenor. In the role of Marguerite, Aurelia Florian’s appealing bright soprano sounded too assertive and shrill, lacking the softness associated with this gentle, innocent character. From where she obtained the strength to shout at the top of her voice in her dying scene remained one of the mysteries in this mystery play.Paolo Battaglia’s dark-timbred bass represented a rather matter-of-fact Mephistopheles in his “Golden Calf” aria, but became appropriately menacing and infernal toward the end. Serban Vasile’s warm, friendly baritone represented an emotionally sensitive Valentin.The Israeli Opera Chorus sounded lively and sonorous, though concentrating on the melodies’ main notes while the swallowed intermediate ones might have been sufficient for another choir.Dan Ettinger functioned as an orchestral conductor par excellence, unleashing uncommon energies from the Symphony Orchestra Rishon Lezion, but seeming to care only little about the singers, who were overshadowed by the instrumental boisterousness most of the time.The performance’s disappointment was its end. The angelic choir’s profoundly moving, heavenly “Sauvee” (Saved) after Mephistophele’s attempt to condemn Marguerite to hell was reduced to a theatrical, superficial afterthought.What a pity!