Starting apparently as a comic opera, it leads up to a sad, tragic portrayal of reality, with much Levin-like social criticism on the way. 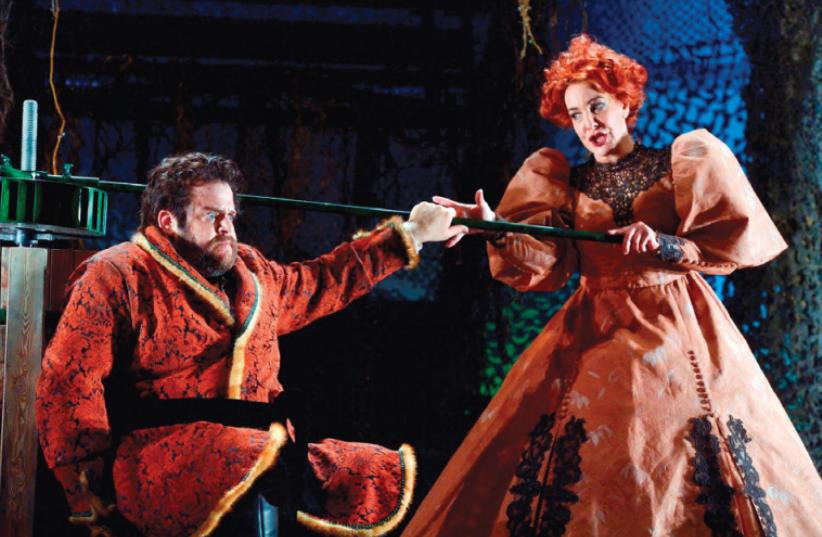 HAIM PERMONT’S ‘The Lady and the Peddler.’
(photo credit: YOSSI ZWECKER)
Advertisement
The double bill presented recently at the Israeli Opera was not Pagliacci and Cavalleria Rusticana but, for a change, the world premiere of two new Israel operas – Haim Permont’s The Lady and the Peddler, based on a story by S. J. Agnon, and Yoni Rechter’s Schitz, based on a play by Hanoch Levin.In Agnon’s story, the main element is mysticism. What is happening between the two characters is intellectually inexplicable, and appeals to the audience’s imagination that cannot find a clear-cut meaning to the events or the personages’ actions. The mystery is personified by the Lady (Idit Zamir), whose soprano is rather too clear, shrill and assertive on the high notes, and too overtly menacing to leave room for the imagination. The confused and naive victim of the Lady, the harmless Peddler, is convincingly represented by Guy Mannheim’s sonorous, dark-timbred tenor. When all is said and sung, the relationship of the two characters remains ambiguous to the end.Permont’s music reflects the mysticism by melodic, tonally undefinable intervals, mostly in parlando style. The orchestra functions mainly in irregular, asymmetric rhythms and by uncommon instrumental sonorities.Schitz provides, misleadingly, the comic relief. Starting apparently as a comic opera, it leads up to a sad, tragic portrayal of reality, with much Levin-like social criticism on the way.Rechter’s music is melodic, easily digestible and close to the pop style of which he is a celebrity. The singers – Noah Briger, Ira Bertman, Yael Levita, Oded Reich – did their very best to portray their characters lively and convincingly.