For this year’s Curtain Up Festival, artistic director Hillel Kogan has ‘picked works that demand of the audience to do more than sit in the dark’ 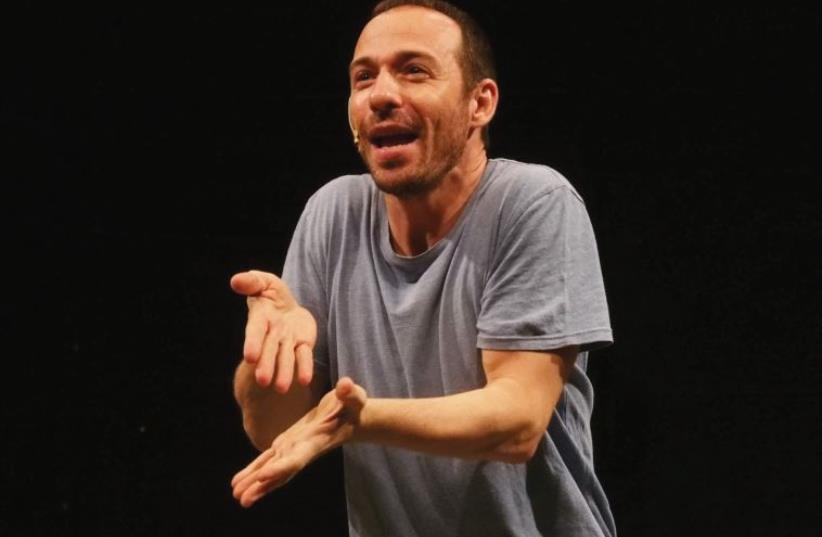 Israeli choreographer Hillel Kogan.
(photo credit: GADI DAGON)
Advertisement
If your plan is to enter a theater, sit in the dark and enjoy a dance performance, this year’s Curtain Up Festival is not going to fit the bill.“If the audience wants to enjoy a show in only one way, it won’t work,” says Hillel Kogan over black coffee at Café Dallal. “The program demands of you to be active. I value intellectual enjoyment over emotional enjoyment. I believe that even if you don’t like something, you can get a lot out of it.”Kogan, 41, is one of two artistic directors of this year’s festival, largely accepted as the most important annual platform for emerging and mid-career choreographers in Israel. Together with Itzik Giuli, who took up the reins of the festival solo last year, the two assembled a playbill that boasts six different “curtains,” each consisting of new works by local artists.Curtain Up is the flagship project of the Culture and Sport Ministry’s Dance Department. The festival has existed for 26 years and has served as a springboard for choreographers such as Yasmeen Godder, Emmanuel Gat, Inbal Pinto, Avshalom Pollack and Renana Raz.The festival’s character and style has changed accordingly with each change in artistic direction. Giuli’s foray into the more experimental milieu last year was met with equal parts criticism and celebration.“Last year,” says Kogan, “Itzik brought a lot of things into Curtain Up that others hadn’t... included.” Kogan feels that this year’s program continues that line, offering artists who function “in the margins” a place on the main stage.“Everyone I chose works in the margins.I also work there. I believe that ‘margins’ means that the Suzanne Dellal Center isn’t your natural home, that the borders of the dance medium are not sealed and that your choreography can’t easily be categorized as choreography. I picked works that demand of the audience to do more than sit in the dark.”Kogan is an outspoken individual. He was born and raised in Israel, and spent nearly a decade dancing abroad before setting up shop in south Tel Aviv. Alongside his passion for dance, Kogan keeps a love of musical composition on the back burner.“I play guitar and piano but those things are in the drawer for now,” he smiles. A charismatic and daring performer, Kogan brings his political and social observations to the stage in his work. His repertoire includes We Love Arabs and Obscene Gesture. He has currently begun his 11th season as the rehearsal director of the Batsheva Ensemble, the company where he spent the lion’s share of his professional life.Wearing all of these hats – performer, choreographer, rehearsal director and artistic director – has proven tiring for Kogan, however he feels that these myriad positions allow him to more fully engage with the dance field.“Spreading out stops me from closing myself up. Anyway I live in a bubble. I am in the bubble that is Israel, Tel Aviv, Batsheva, dance and family. Doing all of these things allows for them to be in dialogue with one another.”Kogan’s roster includes premiers by Ella Rothschild, Uri Shafir, Sharon Zuckerman, Ido Feder, Iyar Elezra and Assaf Salhov and Sahar Damoni. Each individual or team was chosen based on a single presentation in front of Kogan and Giuli.“We allowed the artists to present in any way they wanted, they could just talk, dance or show a video or images.Then we chose the proposals that were interesting, relevant, important and had a new point of view.”For the past several months, Kogan has dropped in on rehearsals, asking questions and sharing thoughts with the choreographers.“I try to give each one what they need. The pieces have surprised me very much. Each one naturally went in a direction that wasn’t initially planned or present in the beginning. The important thing for me to remember is that these works don’t have to satiate me. I don’t have to love them or believe in them even. I just have to make them possible.”Following Curtain Up, Kogan plans to begin a new work, a mission he put off upon receiving the invitation to participate in the artistic direction of the festival.“Most of my energy has gone to the festival these past few months,” he says with the hint of a sigh. “I made the decision to delay making a new work while I am engaged with other artists’ processes.I felt that it was not right to be creating while I am in this role.”Beyond making this new work, Kogan hasn’t thought too far ahead.“There is no master plan. I don’t want to have my own big company. I’m not planning to hatch up a major goal. I am taking little steps and I feel it’s right for me to flow in this way.”The Curtain Up Festival will take place from November 11-21. For more information, visit www.suzannedellal.org.il.