The man who made the queen cry 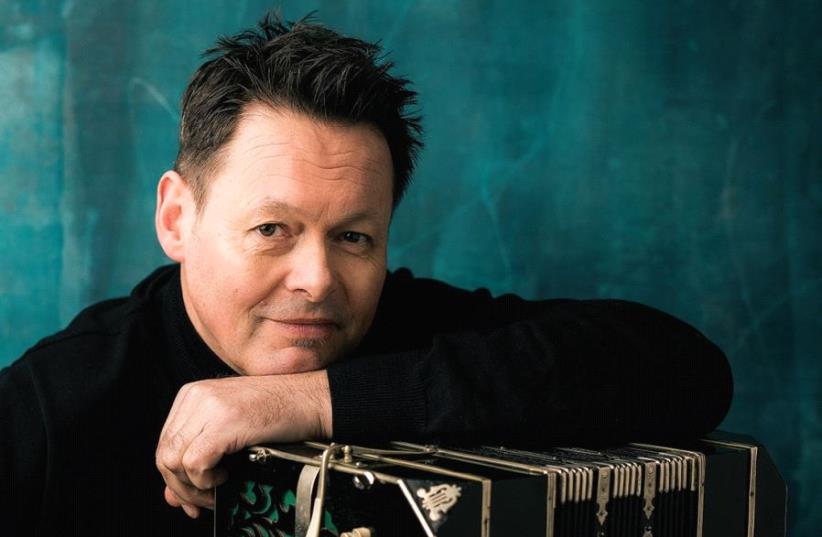 Bandonean player Carel Kraayenhof
(photo credit: PR)
Advertisement
One of the world’s leading bandoneon players, Carel Kraayenhof, will join the Israel Chamber Orchestra for two concerts, led by US-based Israeli conductor Gisele Ben-Dor, who is an avid enthusiast of Latin American music.Due to the Dutch musician’s unparalleled way of playing and his knowledge of Argentinean tango, Kraayenhof is among the most sought-after bandoneon players.In a phone interview on the eve of arrival, Kraayenhof, who is also a composer and music arranger, explains that although the concertina-like instrument is mostly associated with Argentinean tango, the bandoneon was actually brought to Latin America by German immigrants.“The bandoneon owes its name to the German dealer Heinrich Band. The instrument was extremely popular in 19th-century Germany because even those who could not read notes were able to play simple folk melodies on it.Later, it was very popular with German immigrants. Through its melancholic voice, they could express their nostalgic feelings,” he explains.The rise of Nazism put an end to the bandoneon in Germany. The music joined the list of degenerate art. Factories were destroyed, and workers, many of them Communists and Jews, perished in concentration camps.“It was only in Argentina that the bandoneon survived, immediately taking central position in the tango tradition,” he says.“The bandoneon mixes very well with the sound of the strings – violins, cello, double bass – and the piano. Also, the bandoneon has a very pure tuning, so you can put four differently tuned bandoneons as a wind section in a typical orchestra in Argentina. It is similar to jazz bands in the US,” he says.Speaking about tango music and Argentine tango composer, bandoneon player and arranger Astor Piazzolla, Kraayenhof explains that Piazzolla created the tango nuevo style by introducing classical and jazz music elements into old tango.“Piazzolla grew up both in Argentina and the US, where he heard Duke Ellington and Count Basie, but his first teacher was a pupil of Rachmaninov’s,” he says.Born in 1958, Kraayenhof started playing the bandoneon relatively late.“I studied piano from the age of eight. At 18, I started playing Irish folk music, and only in 1994 did I get hold of a bandoneon because of an Argentinean man who heard me playing the accordion in a park in Amsterdam. He said he would try to bring me a bandoneon from Buenos Aires,” he recounts.By the time Kraayenhof met Piazzolla, he had been playing the bandoneon for only two years, “but he got so enthusiastic that he brought me to New York to work in a Broadway theater for three months to perform in the premiere of his musical Tango Apasionado. It was a huge experience for me. I also worked with renowned tango maestro Osvaldo Pugliese. Later, these two names gave me easy entrance into the world of the Buenos Aires art tango,” he says.A multifaceted musician, Kraayenhof has worked with great names in music, such as Ennio Morricone, Yo-Yo Ma, violists Janine Jansen and Joshua Bell and cellist Quirine Viersen. An internationally acclaimed artist, he has performed with many major orchestras.A much-awarded artist, he shares a story about a special musical experience that brought him fame at home in Holland.“In Tel Aviv, I will perform one of the most famous pieces by Piazzolla, Adiós Nonino, which he dedicated to the memory of his father. And this is the piece that I played at the royal wedding. We have an Argentinean queen in Holland, Máxima, who married our Prince Willem-Alexander. Well, when you play the bandoneon in Holland, nobody knows you. But the day after the wedding, there was a huge pile of letters near my mailbox in the street, and on top of it was a little note that read: “‘I cried, too. The postman,’” he recounts.“You know, Dutch people don’t easily show their feelings,” he continues. “Not to mention crying.But on that day, Queen Maxima cried beautifully, and so did two million of my countrymen. Since then, I am known in my homeland as ‘The man of tears,’” says the musician with a smile.