The power of a grudge 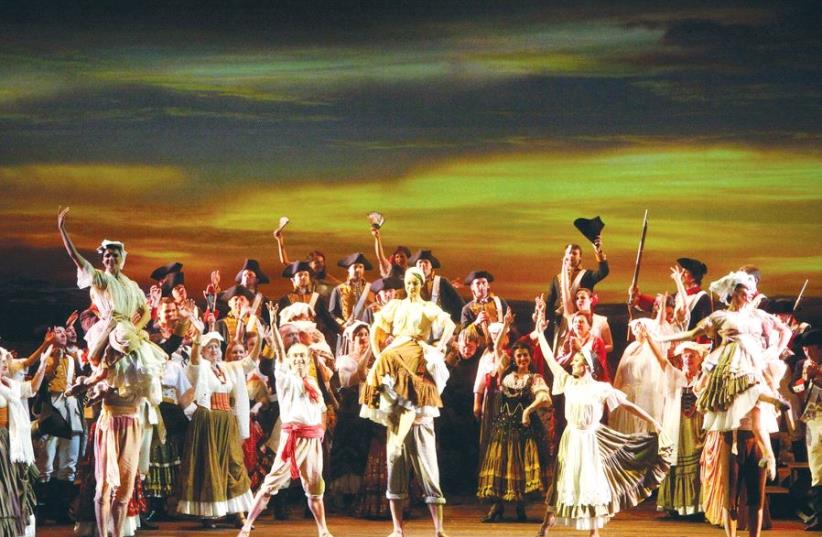 The Israeli Opera
(photo credit: COURTESY OF MARIBOR OPERA)
Advertisement
There is a wonderful children’s book by Hiawyn Oram called Angry Arthur. It is about a boy who wants to stay up late to watch television but is denied his desire. Arthur rages and rages, his anger becoming a monstrous entity that disintegrates the universe. At the end of the book, after Arthur’s ire has toppled his town into the ocean and blown apart his country, continent and the entire planet, Oram writes, “He couldn’t remember what he was so angry about. Can you?” This story comes to mind when thinking about Verdi’s opera La Forza del Destino (The Force of Destiny), which will open this month at The Israeli Opera.“This is the story of a relentless person who spends his entire life looking for his sister and her lover,” says celebrated opera director Pier Francesco Maestrini.“It reminds me of Ridley Scott’s The Duelists, which is an incredible film about two men who face each other down over and over again for 15 years. I thought that this part of the story had to be told.”Maestrini, 52, was born and bred opera. His father, opera director Carlo Maestrini, was a leader in the field throughout the 1950s and 1960s.“I was born and raised in Florence, Italy,” says the younger Maestrini over coffee in the opera’s conference room. It is 10 a.m., and rehearsals will commence in 30 minutes. Maestrini wears a jacket and jeans, places his sporty water bottle on the table, mentioning the hot Israeli spring.“I was always around opera. When I was seven years old, I came to Israel with my father. He was directing Samson and Delilah in Caesarea. Zubin Mehta was the conductor. It was incredible,” he recounts.As a teenager, Maestrini imagined a career as a jazz guitarist, a pastime he treasures to this day.“My father started to become ill, so I substituted for him. It was very natural,” he recalls.His first major gig was in 1993 in Japan. Attracted by his fresh approach to the form, opera companies around the world began calling on Maestrini to direct.“I really love the bright and comedic operas, opera buffa, as we call it. I am drawn to the very bright opera repertoire,” he says.His last engagement in Israel was 14 years ago, when he directed Nabucco.“So much has changed here since then. Starting with the airport, which is completely different, and throughout Tel Aviv,” he says.The production of La Forza del Destino that Maestrini is restaging in Israel is his third interpretation of Verdi’s opus and will be conducted by Daniel Oren.“This is by far the most successful one I’ve done. It’s been rented around a lot. It is not a very heavy production, and it is very pretty,” he smiles.To make his vision come to life, Maestrini teamed up with set designer Juan Guillermo Nova, costume designer Luca Dall’alpi and lighting designer Pascal Merat.“It was the first time that we had worked together, and it was the beginning of a great connection. We have worked together on several projects since,” he says.While staying true to the period of La Forza, 18th century Italy, Maestrini and his collaborators have incorporated new technology into the production.“We use projections to fully immerse the audience in the drama, and it certainly is a big drama,” he continues.To make certain that the plot remains cohesive for the audience, Maestrini has invoked a well practiced tradition of removing a lengthy duet from the third act.“This opera tends to lose its audience. It gets very long and complicated. So I chose to remove the duet, though it is beautiful, to keep things realistic. It makes the show flow better. There is only one intermission,” he says.Duet or no duet, La Forza is a particularly challenging opera for the performers. With aria after aria and intense group scenes to execute, singers must be at the top of their game to pull it off.“It’s very important that the performers, whether young or experienced, still have the urge to explore their character. Even if they’ve done the role many times, they still need that curiosity to try new things, to discover new elements. I love to see people get into their characters. It’s very tricky because, unlike in theater, where the actors can take their time, opera performers must follow the tempo of the music. Everything must transpire on the music, so they are under a lot of stress vocally,” he explains.And while the pace of our lives quickens every day, Maestrini attests to a growing interest in opera.“I see that live performance still interests the audience, and I see that youngsters are filling theaters more these days. Theaters are always running something, around the clock. And with new technologies available to us, we are able to catch the public’s attention in new ways,” he says.At the end of the day, when he sits back to watch his productions, Maestrini allows his personal tastes and instincts to guide his feedback.“I make operas that I want to see. I want to understand what’s going on, and I want to be moved. That is the purpose of what we are doing,” he asserts.The Israeli Opera will perform ‘La Forza del Destino’ on May 12, 13 and 15. For more information and tickets, go to www.israel-opera.co.il.