The righteous ‘Indignation’ of Philip Roth 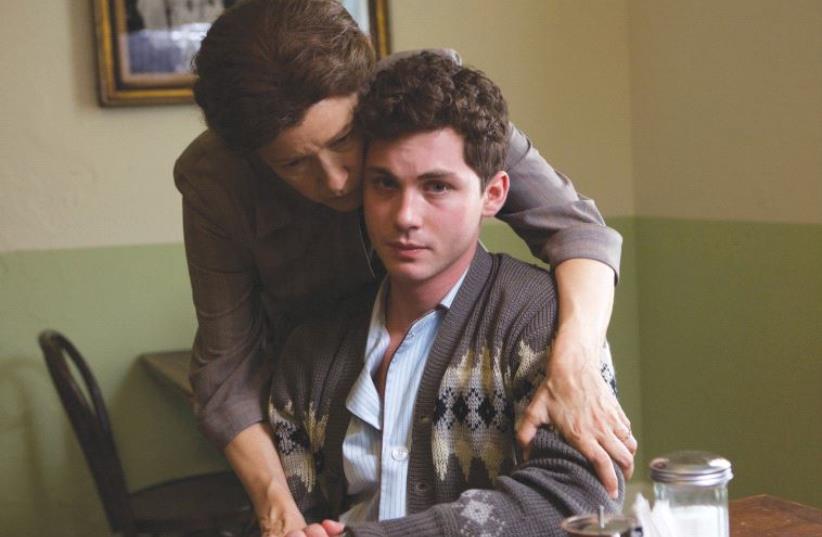 LOGAN LERMAN stars as a troubled Jewish college student in the ’50s in ‘Indignation.’
(photo credit: Courtesy)
Advertisement
‘If you don’t like solving problems – if you don’t like dealing with problems – you shouldn’t produce movies,” said Anthony Bregman. He should know: he is one of the premiere independent producers in America.Bregman sat down for an interview at the Jerusalem Film Festival last summer, where his latest film, James Schamus’ Indignation, was shown. It has just been released throughout Israel.Bregman seems to have solved one problem that has long perplexed moviemakers: making an adaptation of a Philip Roth novel that is faithful to the book, but still works as a movie. Indignation, based on the Roth novel of the same name, has received rave reviews all over the world. Stephen Holden of The New York Times called it “so precisely rendered that it gets deeply under your skin. There are a lot of words, and every one counts,” and there has been a consensus among critics that it is the best Roth adaptation ever.It’s no surprise that Bregman, a Yale-educated New Yorker, has made Indignation into the first movie that matches the brilliance of Roth’s work. The movie is the directorial debut of James Schamus, a fellow indie producer and a screenwriter known for his collaborations with Ang Lee on such films as Crouching Tiger, Hidden Dragon and Taking Woodstock. The two have worked together before.Bregman has made a career of bringing challenging, ambitious and smart movies to life, among them many other literary adaptations. His credits read like a list of the most acclaimed American movies of the past two decades, and include Michel Gondry’s Eternal Sunshine of the Spotless Mind, Bennett Miller’s Foxcatcher, Nicole Holofcener’s Enough Said, Charlie Kaufman’s Synecdoche, New York, Ang Lee’s The Ice Storm and Edward Burns’ The Brothers McMullen.“James has adapted Indignation into a movie that creates something artistic in its own terms and doesn’t try to just to recreate the book,” Bregman said. “James, you know, is a great producer and writer, but he’s proved himself as a director as well.”“James took a year off to write the [Indignation] script, and when he called me to say he had finished a draft of it, I said I didn’t even have to look at it” to want to produce the film.Bregman said he had always felt a “personal connection” to Roth’s work.“He is so outrageous and so smart,” he said, adding that he first read Roth’s iconoclastic novel, Portnoy’s Complaint, when he was in high school. Although you might think this tale of a Jewish analysand obsessed with a gentile girl and dominated by his mother would have seemed dated, Bregman found that it spoke to him.“There were a lot of parallels to the seminerdy, sexually charged world of a Jewish teenage boy,” he said. He even gave the book to a girl from Oregon he met in college, telling her, “Take it – if you can understand it, you can understand me.” She understood so well, the two got married.Talking about the plot of Indignation, which is a coming-of-age story about a Jewish college student in a mostly gentile Ohio college during the Korean War, Bregman said, “There’s definitely a theme running though the book and the movie – and our lives right now – about why would you put your life on the line for a war that you’re not fully committed to?” The hero, Marcus (Logan Lerman, best known for The Perks of Being a Wallflower and Fury), is able to avoid the draft because he is in college. Everything he does that challenges the college administration could actually endanger his life.“His father tells him that the smallest thing can undermine you, can kill you,” he said. “It was definitely an interesting time... when it was OK to be openly anti-Semitic.”Although America has changed significantly since then, Bregman is confident the movie will find its audience.“You try to find a movie that has an urgent reason why people would want to see it,” he said. “Then you ask the gross producer questions you have to ask – who can be in it, what kind of movie stars have to be in it so that you can get attention for it.”But Bregman, who has a remarkable track record of attracting audiences to movies that would not seem to be very commercial, said, “You try to make the movie that you want to make, but you also try to find a way to make a movie people will want to see... That’s what it is for me, I have to ask: do I care about it? Are these people I want to make a movie with? Is this a movie I want to make?... It’s a balancing act, and I’ve been lucky.”