The company will perform in Tel Aviv, Beersheba and Haifa, marking their first tour with this tricky and intriguing ballet. 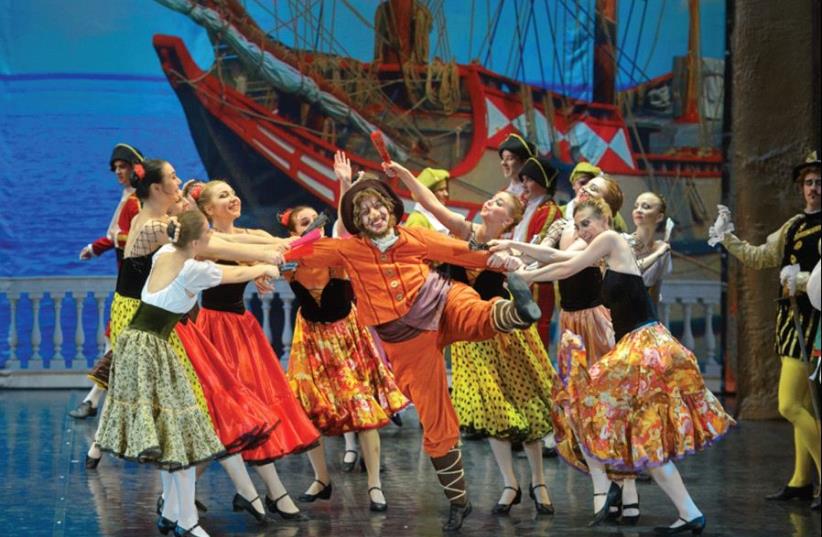 The Russia Ballet Theater
(photo credit: PR)
Advertisement
One of the most powerful assets a ballet dancer can have is imagination. Though less obvious than flexibility, endurance and perseverance, a rich inner life is a must for ballerinas, a tool used every moment on stage. In fact, many professional ballet dancers will attest that performing a ballet is a type of collective, imaginative journey. Such is the case in the great classic ballet Don Quixote. Set in Barcelona, the ballet tells a fantastical tale in four acts of Don Quixote, his servant Sancho Panza and the innkeeper’s daughter Kitri.“Don Quixote is the most temperamental and outstanding of all the classical ballet performances,” says Russian prima ballerina Anna Voytina. “The music is light and inviting, and the old square of Barcelona creates the ambience of sunny Spain. At the same time, the masterpiece is not easy to perform because of the many complicated characters. The ballet is full of leaps and twists that are technically difficult. The dancers must do them in a casual and dynamic way so that the spectator doesn’t see the tough work involved. We also have to express the character of the young Spanish woman [Kitri] who skillfully manipulates her fan and plays her castanets.”During the Passover holiday, Voytina will perform the role of Kitri in Israel with the famed Russia Ballet Theater (RBT). The company will perform in Tel Aviv, Beersheba and Haifa, marking their first tour with this tricky and intriguing ballet.Don Quixote originated in Russia in 1869, choreographed by legendary Marius Petipa and set to music by Ludwig Minkus. Thirtyone years later, Alexander Gorsky restaged the ballet for the Imperial Ballet of St. Petersburg. It is said that all modern versions of this ballet are drawn from Gorsky’s interpretation of the opus.This ballet falls outside of the Russia Ballet Theater’s comfort zone.Founded by soloists of the Mariinsky Theater in 1990, RBT’s mission is to uphold and preserve the honored tradition of Russian ballet. The company’s repertoire includes an all-inclusive list of ballet masterpieces such as Swan Lake, Giselle and The Nutcracker.“Don Quixote has given such a boost to our company,” explains Voytina. “Dancers are perennial students. If you don’t upgrade your skills, you’re stuck.”To prepare for her role, Voytina researched the character and her environs. In Voytina’s eyes, wearing the costume and dancing the steps are not enough for either side, the dancer or the audience. To truly convey the message of the ballet, Voytina believes that the dancer must understand where the scenes are taking place and what motivates the characters’ interactions. After all this hard work behind the scenes, Voytina is excited to get on stage.“We have been to Israel before. The Israeli audience is very warm and understanding, and we are happy to present this ballet, which is a new production for us, to them,” she says.The dancers’ schedule on this tour is quite rigorous. To prepare, Voytina will pack her bag full of creature comforts, namely chocolate.“This may sound strange but I love sweets, and I always have at least two chocolate bars in my purse,” sher says.The Russia Ballet Theater will perform ‘Don Quixote’ on April 12 to 15 at the Opera House in Tel Aviv; on April 17 at the Beersheba Performing Arts Center; and on April 18 at the Rappaport Center in Haifa. For tickets, visit www.kupat-bravo.co.il.