The sounds of music in Jerusalem

More than just a school of rock, Lenagen Bekef teams up budding musicians and turns them into performers. 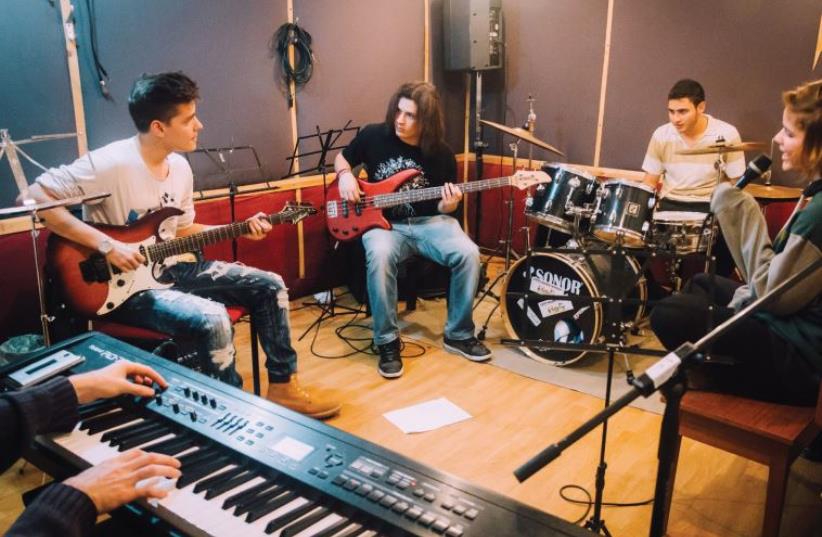 ASPIRING MUSICIANS of all ages rehearse and learn at Lenagen Bekef music school in Jerusalem.
(photo credit: YELENA KVETNY)
Advertisement
Lenagen Bekef’s motto is “Let’s make music.” Simply put, that is what they do for Jerusalem’s aspiring musicians and bands. Offering lessons to all ages and skill levels, and helping form bands from assembling the right group to providing rehearsal times and promoting performances, Lenagen Bekef may be the Jerusalem musician’s best friend. Lenagen director Yigal Grayef sat down with The Jerusalem Post to talk about the need for more trumpet players, Lenagen Bekef’s recent Hanukka concert and the sweet union of soup and jam.How did Lenagen Bekef get started? It was started in 2000 by Yoel Shoshani. He was in Boston at the Berklee School of Music. They do something there where they bring musicians together and teach them how to play together. He decided to bring this idea to Israel. I believe he’s a pioneer; he’s the first person to do this in Israel. Like any good business, it started off in his parents’ basement until it really got going. He and his brother, Yoad, became so successful, and also I think that the neighbors got tired of all the noise, so they moved out of their parents’ house and set up in Jerusalem’s Center One in a small room. Then in 2004, they came to Binyan Clal in Davidka Square.Until then, they had one room, but now there are three rehearsal rooms.What is the mission of Lenagen Bekef? Our mission is to develop musicians, to advance them, whether that be in a private capacity or teaching them how to play together.We don’t promise to turn anybody into a professional musician, or into a rock star. However, a lot of people who have learned with us now work in the field of music.There’s one girl who was a singer here who went on to a TV music competition and [placed] fourth.But our mission is really to help musicians become better.All the teachers are also musicians themselves? Yes, some of the musicians study at the Jerusalem Academy of Music or at Rimon, and some already have degrees. Others may not have music degrees and may not have formally studied music, but they are good enough and their teaching ability is good enough that I’m happy to have them here. Every potential teacher has to give me a lesson first, so that I can see how they teach; how they explain the information and how they transmit to the students what they want to say. We have 12 teachers now who teach consistently. Then we have others who are sort of on stand-by.For instance, we have a trumpet teacher. If we get enough students for her, then she’ll come and teach.For which other instruments do you offer lessons? We offer lessons for guitar, bass, piano, drums, saxophone, trumpet, trombone, flute, recorder, ukulele, mandolin, banjo, harmonica, violin, and voice coaching.How many students and bands do you have now? We have about 45 students and five bands. The aim is to get up to 10 and try to host performances more consistently.How does it work with the bands? Let’s say that somebody plays guitar and wants to play in a rock band. We put them together with a bassist, a drummer and maybe a pianist, and we have an introductory session. If everyone likes it and is happy, then they continue to rehearse once a week for two hours. We organize concerts, and we can also do recordings here. On our wall, we have a few discs of bands we’ve recorded. We had one band a few years ago that went to a national youth competition and won. They then sold out a concert at the Yellow Submarine. We also work with an organization called Halonot (Windows), which is part of the Ministry of Health. They provide subsidies for people with mental health issues to have music lessons with us. We’ve had a couple of concerts in which they’ve performed.It provides them with a lot of self-confidence, which is good.Can you talk about the Hanukka concert? The Hanukka event was at the Blue Hall restaurant in the center of town. We had eight different acts. We had a band of 10-yearold kids playing, which was fun.They’ve been with us for three years and came with almost nothing. We taught them all of their instruments within the framework of the band. These kids play everything from Bach to Green Day. Then, we had a 12-year-old boy playing classical guitar. We had another band, where the bass player is in his 30s, the pianist is his 60s and the guitarist is in her 40s. These are people who came to their instruments a bit later in life. They really exemplify our philosophy that anybody can play. No matter how old you are, or what your level is, we can find a place for you. We also had a duet of these two girls in their 20s. We also had a singer, who performed with accompaniment from his teacher. There was also a madrich band [teachers’ band], who performed blues and jazz. So we had all these different acts, and we filled the space; about 80 people came.It really represented what Lenagen Bekef is about: all levels and all ages.Everybody can play, and everybody is welcome.Are there plans for more performances in the future? Yes, we definitely will. We have a police band, who couldn’t perform, so we’ll hopefully do another concert soon where they will perform.Events like the Hanukka one, we’ll probably do once every six months.I’d also like to do another winter event, and serve hot soup and have a big jam session. We could call it Soup and Jam. That has a ring to it, but then it’s kind of weird – who puts jam in soup? For more information go to www.lenagenbkef.co.il or find them on Facebook.