The Sugar Hill Gang paved the way for rap as a genre. 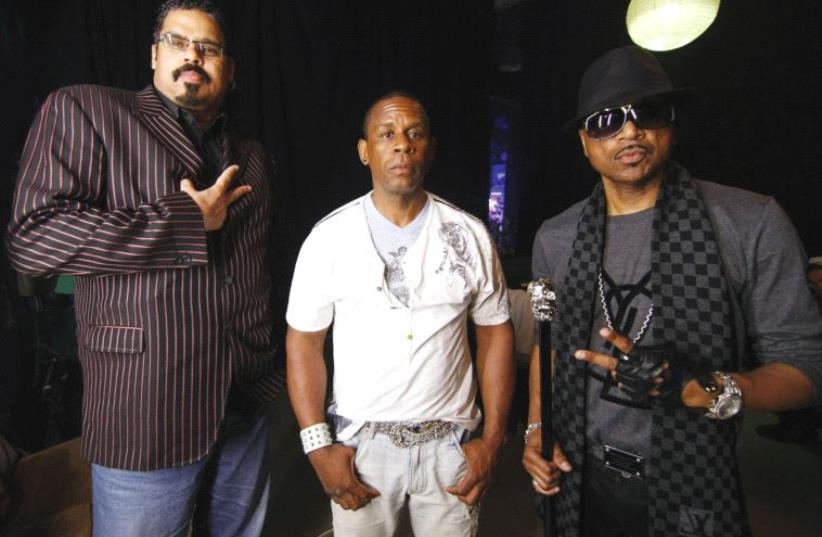 IT’S A rap: From left; Wonder Mike, Master Gee and the late Big Hank Hank of The Sugarhill Gang.
(photo credit: ANDREY MOTORICHEV)
Advertisement
Questions abounded heading in to the Barby Club in Tel Aviv Tuesday night. Would rap pioneers The Sugar Hill Gang live up to their legendary status? Would the absence of the late Henry “Big Bang Hank” Jackson diminish the thrill of seeing Wonder Mike and Master Gee commandeering the stage? The evening started out with a performance from the Tel Aviv-based hip hop and funk group Lucille Crew.They moved the standing- room only crowd with their funky beats and smooth lyrics. When Lucille Crew rapped, “Where the towers are so high,” on their hit “Big City,” the crowd responding loudly with “How High?” Their combination of singing, rapping and dancing had the crowd filled with excitement and prepared everyone for the highlight of the evening.The Sugar Hill Gang paved the way for rap as a genre.The two remaining members, Wonder Mike and Master Gee, rocked the crowd and brought back great memories. Everyone anticipated their 1979 hit rap song, “Rapper’s Delight,” which was the first rap single to ever become a Top 40 hit, and of course they would save it for their last song of the evening.Among the hits they performed with abandon and passion was a cover of the rap song “The Message,” which was originally performed by Grand Master Flash and the Furious Five, also pioneers of hip hop and the hip hop culture.They went on to entice the crowd with “8th Wonder” and “Apache,” and they even performed a new tune, a Latin-style hip hop song. Even if some of the songs weren’t as well known to millennials in attendance, it still didn’t stop The Sugar Hill Gang from rocking the crowd.In the middle of their set, Master Gee played drums while Wonder Mike played the guitar as they proceeded to pay respect to the music they grew up listening to, with songs like “Single Life” by Cameo and a few Michael Jackson and Prince songs. While they were not bad, the crowd was still a bit anxious to continue to hear their hit songs.As the show winded down, the familiar lyrics rang out, “I said a hip hop, the hippie, the hippie, To the hip, hip hop, and you don’t stop, a rock it, To the bang bang boogie, say, up jump the boogie, To the rhythm of the boogie, the beat.”Looking around the crowd, you could see people rapping every lyric of “Rapper’s Delight,” showing the impact the song had had even on those who speak English as a second language.It didn’t matter, because The Sugar Hill Gang showed that hip hop is a universal language, which touches people from all around the world.