The sun will come out... 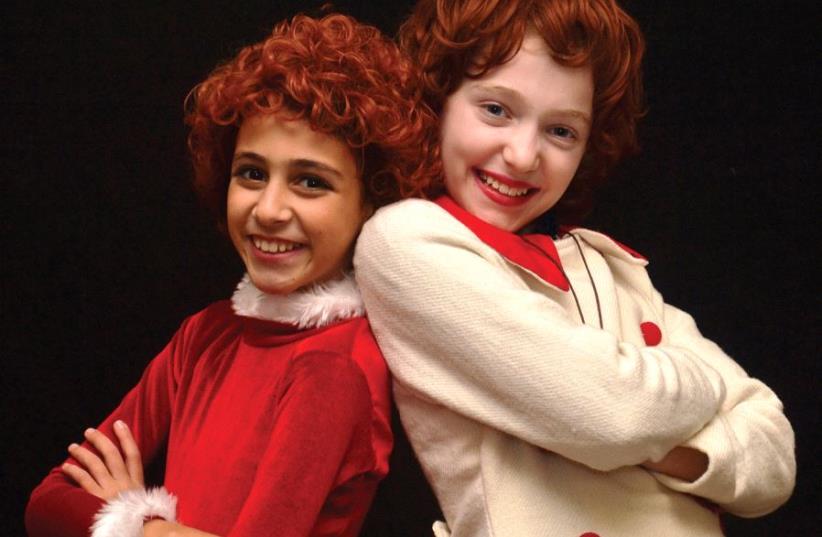 LOGON presents the musical ‘Annie’ nationwide
(photo credit: PR)
Advertisement
Leapin’ lizards! Broadway’s most famous orphan is about to sing her heart out in Israel.The veteran English-language musical theater group LOGON (The Light Opera Group of the Negev) begins performing the musical Annie throughout the country on February 23.One of the best-loved family musicals of all time, Annie has spawned numerous revivals, national and international tours and three movies since its Tony-winning Broadway debut in 1977.“Tomorrow” and “It’s a Hard Knock Life” are two of the most famous songs in the show.The original inspiration for Annie, with music by Charles Strouse, book by Thomas Meehan and lyrics by Martin Charnin, was based on that long-running American comic strip “Little Orphan Annie” that debuted in 1924.The title character of the play is a clever and mischievous little girl who has lived her whole life in an orphanage run by the drunken Miss Hannigan.Running away in search of her long-absent parents, Annie befriends a stray dog Sandy, is taken in by the wealthy industrialist Oliver “Daddy” Warbucks and winds up inspiring the newly elected president Franklin D. Roosevelt to turn the country around.Although the play is set in depression-era New York, with many references to events and personalities of the 1930s, Annie resonates with today’s audiences.Perhaps it’s the theme running throughout the show – the hope for the future. As Annie and Daddy Warbucks sing in their duet: “Yesterday was plain awful, but that’s not now, that’s then.”“In the show, we get a peek behind the scenes of the Cabinet and how wealth influences government, in this case, Roosevelt,” says LOGON director Yaacov Amsellem. “But they’re very human characters who are inspired by Annie’s optimism.”A veteran actor and director of both amateur and professional theater groups in hundreds of productions, Amsellem has a special knack for working with youngsters on stage. There are a dozen child actors in Annie.“Children don’t come to the stage with a developed technique. What they have going for them are emotional reactions,” explains Amsellem. “They are natural actors and react to everything. The challenge is to develop their natural feelings into a dramatic technique. And that’s what’s happening with the orphans on stage in Annie.”Now in its 36th year, LOGON is the oldest existing English-language theater group in Israel.Founded in 1981 in Omer near Beersheba, the group, which draws participants from throughout the country’s South, performed only Gilbert & Sullivan operettas for its first 14 years (thus the original name “light opera”). It then began producing Broadway musicals, which it now stages every year in performances throughout the country. The company has earned a reputation for its lavish productions, such as My Fair Lady, Beauty and the Beast, Man of La Mancha, Oliver! and Fiddler on the Roof.LOGON, a nonprofit, is the only Englishlanguage theater group whose ticket sales support local charitable organizations. It also has grants from the Ministry of Culture, the Beersheba Municipality and the American philanthropic organization PEF.‘Annie’ will be performed on February 23 in Beersheba; February 26 in Ra’anana; March 2 in Nesher; March 5 in Modi’in; March 15 in Jerusalem; March 19 in Rehovot; March 21 in Tel Aviv; March 23 in Netanya; and March 26 again in Beersheba. For tickets, call (08) 641-4081 or book online at www.tixwise.co.il/Annie.