Despite the actors’ best efforts, it too often trudges where it should gambol, or meander, or even run. 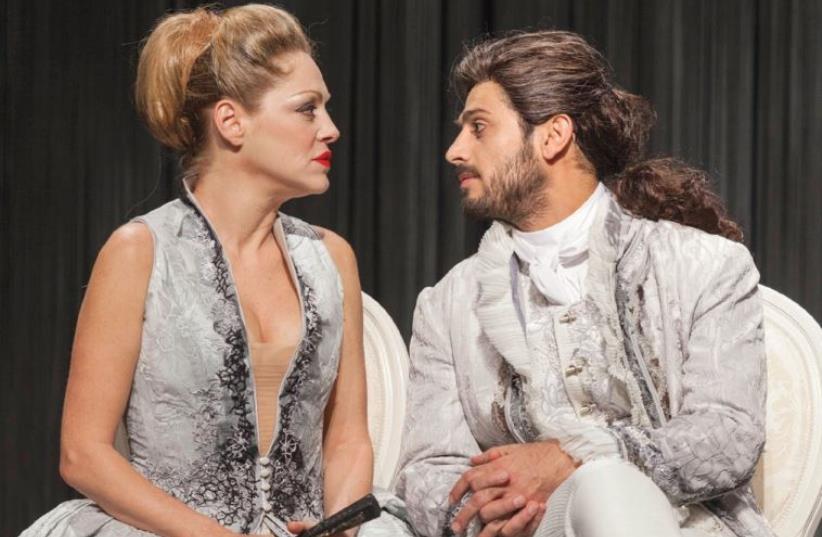 ‘DANGEROUS LIAISONS’
(photo credit: GERHARD ALON)
Advertisement
Ilan Ronen’s version of Liaisons Dangereuses is a parable for our lives here, a cynical protocol in which characters and events are moved hither and yon in an elaborate and often choreographed rite.“Be careful what you wish for” goes an old Chinese proverb and in Christopher Hampton’s caustic comedy of sexual predation, corruption and revenge, everybody loses. Hampton based his play and his screenplay on the best-selling 18th century epistolary novel by Choderlos de Laclos. In Ronen’s production, the letters almost become another character.The Viscount de Valmont (Aviv Alush) and the Marquise de Merteuil (Osnat Fishman) are wealthy, bored, and one-time lovers. De Valmont seeks to seduce the virtuous and married Mme de Tourvel (Dana Yadlin).The Marquise seeks revenge.She was dumped and her former lover intends to marry the virginal Cecile Volanges (Lea Gelfenstein). Valmont is therefore to seduce Cecile – who’s fallen in love with her music teacher, Danceny (Maor Schweitzer) – and upon written proof that he’s succeeded with Tourvel, Valmont will get a night in the Marquise’s bed.But Valmont falls in love with Tourvel and the unexpected takes over.Seven chandeliers are the only decoration above Niv Maor’s bare stage. Characters and furniture enter through floor-to-ceiling fringed curtains. The curtains are black. The furniture is white. A jazzy Moonlight Sonata sounds like a cracked record. Ula Chevshov’s sort of 18th century costumes jar.It’s deliberate. We’re not meant to empathize. We’re to be reminded, warned, that unless we mind our Ps and Qs, “It’s beyond my control”, Valmont’s cruel mantra to Tourvel, may prevail here, and then we’ll be done for! The actors do a sterling job.Ruth Landau is lovely as Mme de Rosemonde, Valmont’s scatty auntie. Yadlin infuses Tourvel with smoldering intensity. Gelfenstein’s Cecile is both innocent and avid. Fishman’s bare-armed, sensual Marquise is rapier-sharp, mean and deliberately hollow.This is a woman who will not feel. As the amoral Valmont, Alush is poised, in control, until suddenly he isn’t, and we see the bewilderment and fright.What this ambitious Liaisons lacks is color and rhythm.Despite the actors’ best efforts, it too often trudges where it should gambol, or meander, or even run.