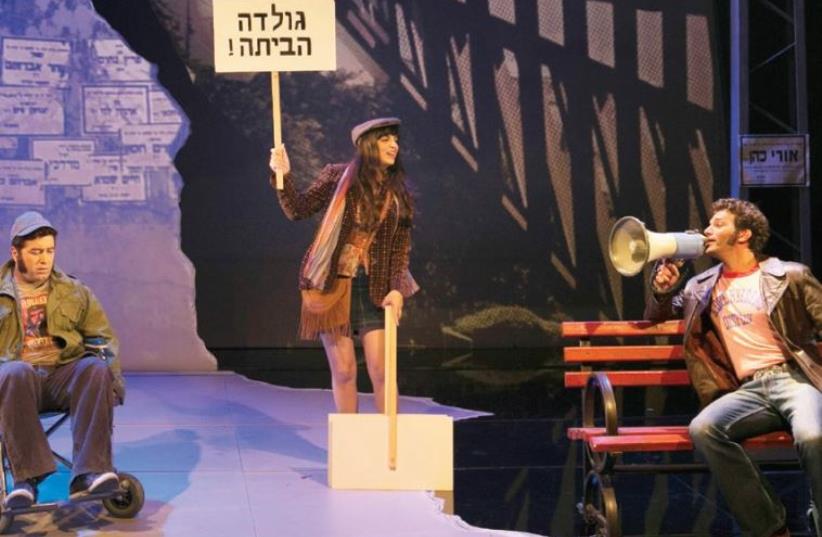 ‘ELLA GROSSMAN’
(photo credit: DANIEL KAMINISKI)
Advertisement
The staging is brilliant. Newspaper headlines, cascading columns of letters, a half ruined half-wall that advances and recedes, furniture that trundles on and off, costumes that reflect their time, even to the ‘70s exaggerated sideburns on the men, deft lighting, apt music choices. Kudos to the Ella Grossman designers, including set designer Eran Atzmon, costumer Orna Smorgonsky, video artist Yoav Cohen and most certainly to director Pines.The actors, too, tackle their lines with imagination and fervor. Gaia Be’er-Gorovich reveals a starry-eyed, somewhat naïve young Ella who promises Papa Shmuel, played with deceptive simplicity by the veteran Avraham Selektar, that she’ll never hide her light under a bushel. She interacts with Hila Feldman whose grown-up Ella has a ferocious intensity, little sense of humor, an aversion to compromise and a world that’s either black or white.Shlomi Tapiero’s privileged, pampered Yair and Haike Malka’s overbearing, bullying Uri provide her a proper foil, while Shimrit Lustig as glamorous Ossi demonstrates that you can have it all.Yaniv Levi is a soulful, gutsy Miki who lets us see the torch he carries for Ella, while Keren Marom as Shira includes us in her mounting frustration.They do their best with what they’ve got, and there’s the rub, because, rather than a play, Ella Grossman is a docudrama that doesn’t seem to know what it really wants, and whose characters are therefore more placards than people.Ella wants to be a journalist but both in the IDF and in civilian life her gender continuously erects barriers on her career path. As its trajectory swings upwards, she pays the price so that when she finally makes it to the top, she’s alone and friendless. Then, just as “a scoop has turned to hope,” fate steps in. Ella Grossman takes on gender inequality and bias, the moral cost of our endless wars, and Israel’s generally macho culture, but it prods rather than probes.By Dafna Engel Mechrez, Directed by Tzipi Pines, Beit Lessin, June 18