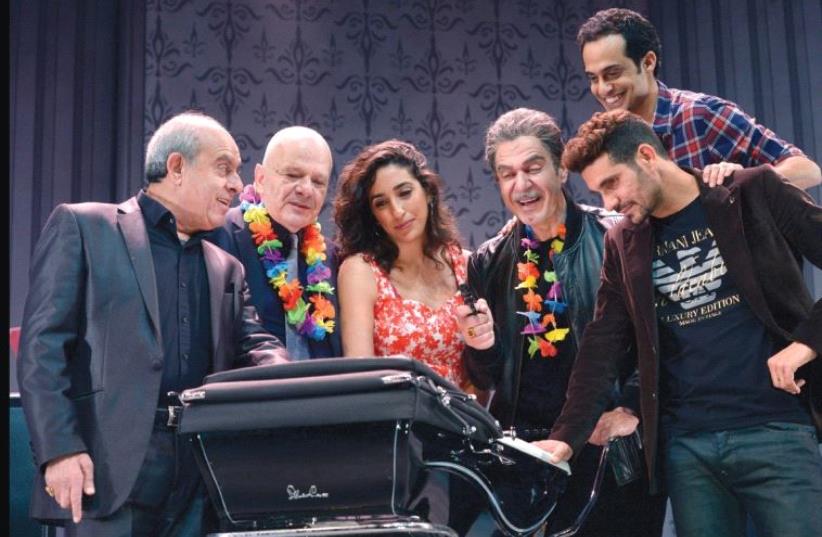 Shush, she's sleeping...
(photo credit: YOSSI ZWECKER)
Advertisement
SHUSH, SHE'S SLEEPING...
By Shay Shabtay & Tomer Amiram
Directed by Roni Ninio
Haifa Theater, August 25 If you swap your brain for bubble-wrap, you’ll thoroughly enjoy Shush, a silly comedy wrapped loosely around two aging Israeli gangsters, a soon-to-be one-year-old, her mum, her convict dad, and Mum’s lover, the proverbial boy-next-door.Oops! Just a minute. After all, would director Roni Ninio and actors of the caliber of Moshe Ivgi or Yussuf Abu Warda (not forgetting the others) participate were Shush just fluff? Is it telling us something subliminally? Perhaps.Yvonne (Alma Dishy) and lover Assaf (Yogev Yefet) are talking of moving to Thailand, with baby Gali, of course, but without Yvonne’s father, gone-to-seed former gangster kingpin Avram Avital (Ivgi) with whom she and Gali live. Then, unexpectedly, Yvonne’s husband blows in. Did Igal (Shlomi Koriat) get early release, or did he escape? Yvonne isn’t pleased to see him and is reluctant to show him the sleeping – the always sleeping – baby whose first birthday will be on the morrow.“Where were you when I needed you?” she asks her truculent husband. “I had to do everything all alone.”Yvonne also has a bone to pick with Igal’s father, Yehuda (Abu Warda), currently the reigning Godfather and Avital’s long-time rival. Yehuda wants to throw a big bash for little Gali at his place but Yvonne puts her foot down and refuses. When Yehuda shows up at her place with a king-size pink teddy bear, things start going to hell in a hand-basket, and not even the arrival of arbitrator Yakov (Albert Iluz) – whom both dads naturally attempt to bribe – can ameliorate.The hint that Shush may be more than a cucumber-season silliness presents itself in Dana Tsarfaty’s set. The walls of Yvonne’s apartment soar to the flys, more like prison than apartment walls. The walls shift to provide entrances and exits. There’s only one real door. The décor is sloppy and unappealing – beanbag chairs here and there, not much else. Stalemate is almost invited. We here have boxed ourselves into a corner, is what Shush may be trying to say, with no clear way out. And why gangster families? Because they are bastions of hierarchy, with very set rules. Flexibility isn’t really an option. Are we being manipulated? That said, the actors seem to be having a good time. Ivgi – he’s put on some weight – is an appealingly rumpled and messy Avram while Warda’s Yehuda is correspondingly suave with a bit of menace thrown in. Dishy is believable both as Gali’s fiercely protective mum and as a sensuous and vibrant woman who wants more than life is affording her.Koriat is nicely volatile as the unpredictable Igal, Yefet makes a sympathetic Assaf while Iluz cheerfully steals the scenes he’s in.Is Shush a forgettable triviality? Is it more?
Advertisement
Subscribe for our daily newsletter