Perfect summer fare, this Closet has no skeletons. 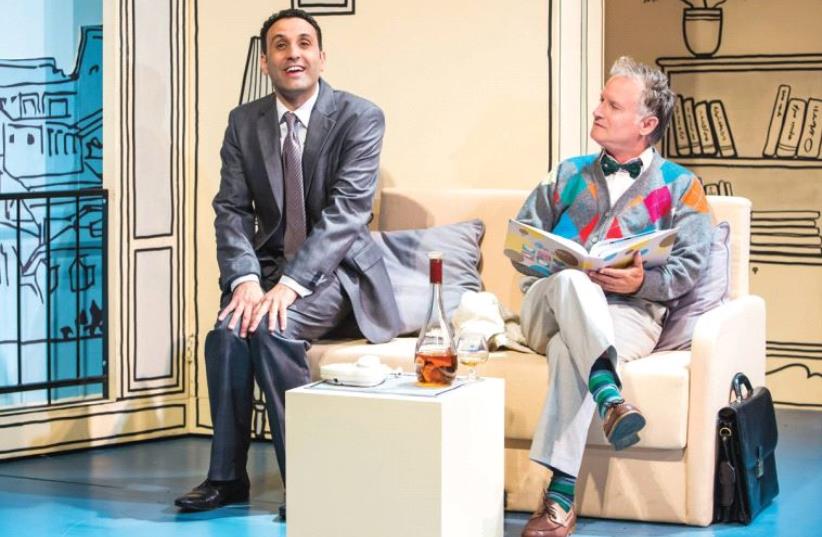 The Closet
(photo credit: KFIR BOLOTIN)
Advertisement
THE CLOSET
By Francis Veber
Translated by Eli Bijaoui
Directed by Alon Ophir Bet LessinWhen it comes to comedy, Alon Ophir rises to the succulent bait like trout to a fly. So it is with The Closet that sets off peals of laughter from the start to its (but naturally), happy ending.Pignon (Yaniv Biton) is a nothing, a nobody, a loser with a capital L. What’s more, he knows it. What’s more, he accepts it as immutable. Not only is he divorced, his son avoids him and he’s just been fired from his accountant’s job at the rubber factory – they’re downsizing. How will he pay alimony and child support? It’s the last straw on the messy haystack that’s his life. He’s going jump off his balcony.“Wait!” “What?” Enter Belone, aka the utterly inimitable Dov Navon. Belone is the new neighbor. He’s gay.He was once fired for being gay, but other times, other mores. He advises Pignon to pass himself off as a gay man so that his company, whose chief product is condoms, will be obliged to rehire him lest it appear homophobic. And so it comes to pass. Pignon hasn’t changed – yet. What’s changed is how he’s regarded and so through every gloriously non-PC moment, Pignon gradually learns that he’s a man, a whole human being – with the most salutary results.Olga Smorgonsky’s movable, placardish set – it’s a pun, because in French a closet is le placard – and the completely apt costuming – look for a very pink sweater – add to the production’s visual and verbal fun.Biton as self-effacing Pignon is pitch-perfect – they all are for that matter – and as he grows into himself, even his body seems to expand together with his self esteem. Navon’s portrayal of Belone doesn’t have even one unnecessary twitch. Hai Maor as Pignon’s initially super-homophobic colleague effortlessly segues from brutal to appealing to pathetic. Koppel is Pignon’s always anxious weather- vane boss, and Ami Weinberg has him down pat. Michal Stammler as manager Veronique moves gracefully from prissy to passionate while Maya Bachovski as the gossipy Ariane makes us hoot.Perfect summer fare, this Closet has no skeletons.