Time out: A quiet vacation in Eilat

A short stay at the Astral Maris provided much-needed relief from daily stress. 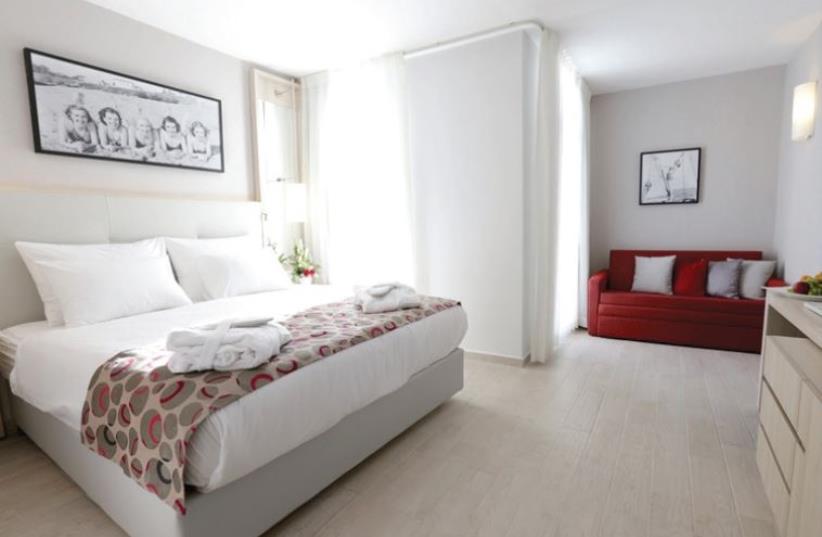 Astral Maris hotel in Eilat
(photo credit: PR)
Advertisement
Stealing a few minutes to have coffee with a friend one morning and talking about how busy we were with no relief in sight, I had no idea there was a treat waiting in my email: an invitation to check out the Astral Maris hotel in Eilat.Formerly the Sea Side hotel located on Eilat’s northern beach, the hotel closed in late December for a top-to-bottom NIS 12 million renovation and reopened three months later as the Astral Maris.From complete overhauls of the common areas to the addition of shower stalls in the bathrooms and new furniture and interior design everywhere, the overall feeling of the hotel is fresh.But the Maris, which has received a 2015 TripAdvisor Certificate of Excellence, isn’t the Astral chain’s only new face in the southern resort town. Owners Beny and Eilat Zerach (guess where she was born) are making improvements at their other hotels as well, with the aim of achieving a four-star rating. The Astral Palma (formerly Marina) underwent an extensive renovation and rebranding last year, and the Astral Village is adding high-end suites.“We wanted to upgrade to get a higher level of clientele. We know there’s a standard, and we want to be in the higher standard,” Eilat says.While all the chain’s hotels offer a great vacation experience, the Maris, she says, is especially designed for those looking for peace and quiet.She wasn’t kidding. Upon my entering the Maris lobby, the stress had no problem leaving my body, as I was surrounded by soothing beach shades of teal, brown and white.And then there was quiet. Even at the pool, which often can be a challenging place for adults looking for a quiet swim and snooze, there was no booming music or rowdy kids.The 96-room Maris caters primarily to singles and couples, and this is evident in the communal areas. In fact, only three of the hotel’s rooms are designed for families; 86 are designated Superior, three as Standard, and one is Single. There are also three suites, two with a sea view and one overlooking the pool.With the exception of soldiers, the hotel policy is no guests under the age of 21 without a parent – meaning there must be an adult in the room with the kids.The music in the pool area, rooms and lobby is not your typical elevator music. It is provided through Seven Pop, a jukebox-like system that allows guests to choose the order of songs to be broadcast over the hotel systems from a pre-selected list. Even someone as technologically challenged as moi managed to download the app and enjoy what felt like a personal playlist while lounging by the pool! “Today, a vacation is no longer a luxury.With today’s lifestyle, a vacation has turned into a basic need,” says Eilat.Greeting us when we arrived at the Maris, dressed in a suit on an extremely hot Wednesday morning, was our host, the smiling Hedley Ephron. The Johannesburgborn general manager, who joined the chain a year ago, has been involved with the hotel’s transformation step by step.Brimming with pride over the changes, he says, “You can feel the difference.”The beach motif continued into the suite, designed with a rattan seating area and floor-to-ceiling windows and terrace overlooking the sea, the boardwalk and the mall just a short walk away.After a relaxing respite on the terrace, it was time for a buffet dinner at the hotel’s Sea-Bell Restaurant. The food choices for dinner were well above the standard hotel fare, as was the case the following morning at breakfast.Entertainment is provided to guests in the lobby. Three times a week there’s a live music performance, and on the other days a pianist plays in the lobby for the enjoyment of the patrons.For those looking for a more familyfriendly atmosphere, the chain offers the all-inclusive Astral Coral and Astral Nirvana in the city with entertainment staff and kids’ clubs. The Village and Palma also offer accommodations more suitable for families and have kids’ clubs that made me want to spend a bit more time in them.That’s not to say, however, that there is nothing for the children to do at the Maris.In addition to the pool, there are children’s shows, balloon workshops and a kids’ club is in the works.Village and Palma are located at the opposite ends of the boardwalk on the marina and just across from the Ice Mall, with shops and restaurants surrounding an open iceskating rink that offers a nice relief from the summer heat.Though already providing a great vacation destination, the Zerachs aren’t finished. Eilat says they are in the process of obtaining permits to build a water park across from the Village and Palma for the kids to enjoy. And for the grownups, there are plans for a spa adjacent to the Maris.The great vacation will then be perfect. ■ The writer was a guest of the Astral Hotels.