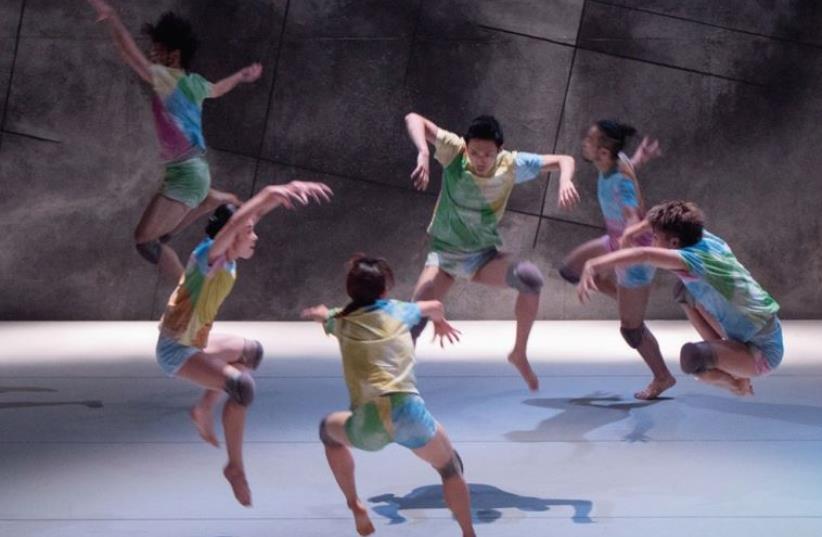 Company Un Yamada.
(photo credit: NAOSHI HATORI)
Advertisement
"You have to be responsible not only for your body, but you also have to be responsible for your space,” says choreographer Un Yamada to a group of Israeli dance students.“We live in Tokyo, and in Tokyo there are a lot of people everywhere. You have to know how to stand very close to someone and not touch them. On the train, we are right next to one another, but we are never touching.”As she speaks, Yamada gets very close to two of the dancers nearest to her. Even though her long hair brushes against one of the women’s shoulders, her body is visibly separate from the other two.Spatial awareness is a key element in Yamada’s work, and one she has spent a good deal of time imparting to the 24 secondyear students of the Bikurey Ha’itim Arts Center’s Maslool Professional Dance Program. As they rehearse sections of the eightminute excerpt that they will perform as guests in Yamada’s evening at Tmuna Theater this weekend, the dancers weave in twos, threes and groups through one another’s space at great speed. They jump, turn, slide, dive and run in the tightly packed studio, narrowly avoiding countless collisions.When Yamada speaks, they stop instantly. When she quietly requests that they run the section again, they do so without a moment’s hesitation.Yamada has spent the past two weeks with the Maslool dancers, transferring to them a piece made on her Tokyo-based troupe. There are cultural divides to bridge, counts to learn, phrases to polish, but Yamada seems very calm. She sits cross-legged at the front of the studio, her head just reaching the ballet barre on the wall above, watching and instructing.At 46, Yamada is one of the most respected choreographers in Tokyo.Her esthetic includes touches from ballet, butoh and gymnastics, the practices Yamada was trained in before striking out on her own as a choreographer. Since 2002, she has maintained her troupe, which always consists of 12 dancers, creating original works that are performed throughout Japan and abroad. This weekend, she brings Monaka, a group work that premiered in September of last year. The work takes its name from a traditional Japanese sweet comprised of bean paste and biscuits. To Yamada, the layered texture of this sweet treat mirrors the heart of Japanese culture.This is Company Un Yamada’s second visit to Israel. The last visit was to the Suzanne Dellal Center for performances of Yamada’s The Wedding in 2014. It was during that visit that Maslool directors Ofir Dagan and Naomi Perlov became aware of Yamada’s work.For the past eight years, Dagan and Perlov have turned out some of Israel’s finest dancers. The only program of its kind and caliber, the education provided by the Maslool imparts vital skills to its participants, preparing them for the complex life of a dancer.These dancers, who tirelessly attend class, rehearsals, performances, open houses and solo projects during their time at the Maslool, are also, for the most part, soldiers.“Seventy-five percent of these dancers are Outstanding Dancers in the army. When the clock strikes four, they put on their uniforms and go to serve. We are all about experiential learning. We want to bring as many movement languages as possible to our students,” says Dagan during the rehearsal. “We like to bring choreographers who are active, who are working in the field and who could possibly offer these dancers employment once they finish the program. We choose very carefully. We review loads of videos, and often we pick a section from the artist’s work that surprises them but that we think can be of great value to the education of these young dancers.”Beyond dancing, Dagan and Perlov attempt to give the Maslool dancers a comprehensive view of the dance world.“We host them, along with their families, in lectures about what it means to be a dancer. For most of them, their dream is to join a major company, and that doesn’t always happen. We teach them about the various jobs that are off stage such as rehearsal direction and producing. We recognize that injuries happen in this career, so we want them to see what other ways they can be engaged when they are not able to dance.”Dagan points out one of the women and says that she recently returned from an audition in Europe.“We saw the final list, and she’s up there with nine other dancers from around the world,” he beams.Perhaps the most compelling element of the Maslool program is the stage time. Whereas nearly every other similar dance program puts emphasis on rehearsal time, the Maslool cares just as much about getting dancers into the limelight quickly and often.“Being on the stage is the goal of a dancer, so we prepare them for it. A lot of these people didn’t know how to behave during a technical rehearsal or what ‘cue-to-cue’ meant before they got here, and those are really important things to know once you are working in a professional environment. We have 50 shows a year, both here and on the major stages around the country. This performance with Un is a major moment for them, one we are proud to facilitate.”

Company Un Yamada and the dancers of the Maslool Professional Dance Program of Bikurey Ha’itim Arts Center will perform at Tmuna Theater on March 25 and 26. For more information, visit www.tmu-na.org.il.
Advertisement
Subscribe for our daily newsletter