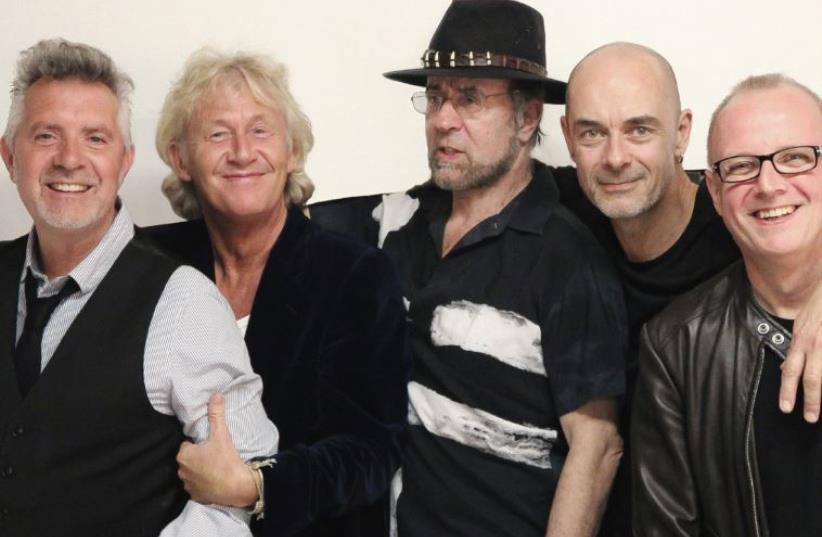 British rock band Manfred Mann’s Earth Band
(photo credit: PR)
Advertisement
1. FILMS: HOPE AND DESPAIR A Tale of Love and Darkness is based on Amos Oz’s novel. Directed by Natalie Portman, the film takes place in Jerusalem. It chronicles Oz’s memories as a 10-year-old boy having to deal with the flight from Europe’s horrors, through to Israel’s War of Independence. With the birth of his new country, his mother sinks into depression and despair. With Natalie Portman, Makram Khoury, Shira Haas, Gilad Kahana.
2 TELEVISION POPULAR CRIME SERIES The 12th season of the record-breaking crime drama NCIS airs on HOT. For six consecutive seasons, the series was voted most successful US TV drama, with an average of 18 million viewers. NCIS follows the Naval Criminal Investigative Service with special agent Leroy Jethro Gibbs (Mark Harmon), who leads a group of colorful personalities in investigating crimes. Saturdays at 9 p.m. on HOT Zone and HOT VOD.
3 DANCE COLLECTIVE SQUASH A Single Stalk is a new work by choreographer Odelia Koperberg. The work depicts a current collective mental state: With a squashed present, we repress in order to survive. The movement language is based on Twist, a method developed by Koperberg that has two bodies going in different directions on the same route. Tuesday at 8:30 p.m. at Mahsan 2, Bayit Lamahol, Jaffa Port. For tickets, call (03) 902-1563.
4 IRISH STEPSMystery of the Dance is a new plotdriven, interactive Irish dance created by Yair Verdiger. It tells the story of two childhood friends who discover a mysterious goddess who steals their hearts. Verdiger, who danced with the international Lord of the Dance, has created this 70-minute performance, accompanied by fiddle, singing and video art animation. Saturday at 9 p.m. at Heichal Hatarbut in Modi’in. For more performance dates in September, locations and tickets, see www.mysteryofthedance.com.
5 MUSIC PSALM FOR DAVID David D’Or is blessed with a beautiful and unique voice. Using his four-octave range, he can reach the high notes of a countertenor and drop to the depths of a baritone. Recently, his root-searching has led him back to the chanting at the Temple, creating a beautiful show. September 19 in Caesarea (with Berry Sakharof, Kobi Aflalo and Yishai Rivo). For tickets: 052-388-8811; Caesarea *2207.
6 GOOD SHOWIn his new show, singer Rami Kleinstein combines hits from his 25-year career and numbers from his latest album, Good People. With special guest stars Miri Masika and Pablo Rosenberg. Saturday at 9 p.m. at the Zappa Amphi Shuni, Binyamina-Givat Ada. For tickets, call *9080; www.zappa-club.co.il.
7 CLASSIC GERMAN The Israel Symphony Orchestra Rishon Lezion performs a concert of Brahms’s German Requiem, with the Kammerchor Stuttgart, soprano Joanna Winkel, baritone Tobias Brendt and conductor Frieder Bernius. The program will also include vocal works by Mendelssohn and Schubert. Saturday at 9 p.m. and Tuesday at 8:30 p.m. at the Rishon Lezion Heichal Hatarbut. Sunday at 8 p.m. at Tel Aviv University, Smolarz Auditorium. Monday at 9 p.m. at the Community Center in Rehovot. For tickets, call (03) 948-4840.
8 MIXED BAG MUSIC IS ART The Ashdod Museum of Art and the Culture Ministry are hosting two events involving music and art. The first is a gallery talk in the exhibition “The Last Sea – Israeli Art and Sea” and an evening of Israeli literature reading, accompanied by live music. The second event is a tour through the museum to the sounds of the Ashdod Symphony Orchestra. Thursday at 6:30 and 7:30 p.m. (respectively) and Friday at 11 a.m. and noon at the Ashdod Museum of Art. For more information, call (08) 854-5180/1.
9 ART FOOD FOR THOUGHTThe “Wine and Food” group exhibition is opening in the spirit of Rosh Hashana. The exhibition focuses on food and wine in Israeli art. The realistic and naturalistic paintings are created by highly skilled figurative artists who portray fruits, vegetables, beans and scenes from the Israeli markets. Opens Thursday at 7:30 p.m. at the Biderman Private Art Collection Gallery, Kfar Shmaryahu. For more information, call (09) 970-6500.
10 UPCOMING MUSIC HIT MANN Legendary British rock band Manfred Mann’s Earth Band is coming to Israel for one show. The veteran band, formed by Manfred Leibovitz in the early 1960s, was known for its cover tunes that became hits. Mann is considered one of the greatest keyboardists in the rock genre. He will arrive with the band’s original guitarist Mick Rodgers and three relative youngsters. September 21 at 9 p.m. at the Wohl Amphitheater (Ganei Yehoshua) in Tel Aviv. For tickets, call 077-506-0232; www.rockstage.co.il.
Advertisement
Subscribe for our daily newsletter