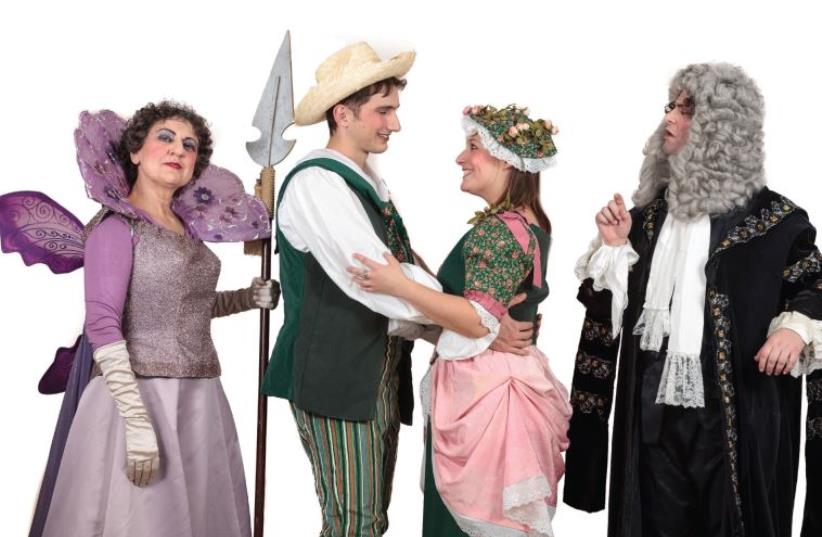 Gilbert and Sullivan’s comic operetta Iolanthe
(photo credit: PR)
Advertisement
1. FILM: JUMP FOR JOY Based on a true story, the comedy-drama Joy tells the tale of a family across four generations and the woman who rises to become the founder and matriarch of a powerful family business dynasty. With Jennifer Lawrence, Robert De Niro, Bradley Cooper.2. DANCE: THREE’S THE CHARM Ohad Naharin’s acclaimed Batsheva Dance Company’s evening-length piece Three is an interconnected collection of three dances. “Bellus” (“beauty” in Latin) explores the silence between the musical notes. “Humus” (“earth”) is an all-female composition set to the music of Brian Eno. And “Seccus” (meaning both “this” and “not this”) includes the entire troupe of 18 dancers, who dance individually, testing their own boundaries while creating a fervent, energetic group composition.

Tuesday through next Thursday at 9 p.m. at the Suzanne Dellal Center in Tel Aviv. For more info and tickets: www.suzannedellal.org.il

Tel Aviv’s Barby Club presents Jane Bordeaux, a trio that mixes pop and Americana with Hebrew texts through catchy melodies and clever lyrics. The trio is comprised of vocalist Doron Talmon, bassist Gilad Mati and guitarist Amir Zeevi.Saturday at 8:30 p.m. NIS 68. For more info and tickets: www.barby.co.il 4. MUSIC: MUCH ADO ABOUT LOVE Israeli singer-songwriter Dana Berger presents an acoustic concert in Jaffa. Her songs often speak of love and the difficulties in relationships and break-ups. Berger will perform many of her greatest hits, as well as songs from her latest album, Matanot shel Zman.Tuesday at 8 p.m. at Warehouse 2 in the Jaffa Port. For more info: www.choreographers.org.il 5. MIXED BAG: THE WIZARDRY OF OZ As part of the Let the Words Do You series, the Holon Mediatheque hosts a special event celebrating the 50th anniversary of the publication of Amos Oz’s first collection of stories, Where the Jackals Howl. Musicians such as Eran Tzur, Yali Sobol and Karni Postel will perform, and Oz will read excerpts from his book. In Hebrew.Tomorrow (Friday) at 11 a.m. at 6 Golda Meir Street, Holon. For tickets: (03) 502-1552 or www.mediatheque.org.il 6. TOURS: ON THE ART TRAIL Jerusalem’s Tower of David Museum offers a tour that chronicles the history of arts and crafts in the Old City. The three-hour tour begins with a visit to the exhibition “Objective” at the museum and a talk about ancient crafts that adorned the city walls and buildings. It then continues into the alleys of the Christian Quarter to observe various workshops, highlighting Armenian ceramics and Damascene art.Tomorrow (Friday) at 9:30 a.m. NIS 40.For reservations: *2884.7. SPORTS: IT’S A CHALLENGE This weekend, Israel’s biggest mountain biking and off-road running event takes place at the lowest place on Earth. The Veolia Desert Challenge is an annual series of rigorous outdoor events in the desert near the Dead Sea. There is something for everyone: the Spartan Desert Challenge MTB Marathon; Moon Run (night trail running); Desert Man (endurance challenge in three stages); Race for Peace; and easy trails for families and beginners.

8. EXHIBITIONS: ART THE YEAR THAT WASThe annual Local Testimony photojournalism exhibition opens at the Eretz Israel Museum, Tel Aviv, at the same time as the International World Press Photo exhibition.As every year, the exhibition features works that bear witness to the events of the past year: war and peace, politics and society, art and culture, nature and the environment, sports, portraits, multimedia presentations and more.Until January 16 at 2 Haim Levanon Street, Tel Aviv; (03) 641-5244.

9. EXHIBITIONS: AN EMPEROR CAST IN BRONZE Three bronze portraits of the Emperor Hadrian (117-138 CE) are brought together for a first-time display at the Israel Museum, marking a symbolic return of the Roman emperor to Jerusalem, whose last visit to the city was in 130 CE. One portrait is from the British Museum, found in 1834 in London in the River Thames; another is from the collection of the Louvre Museum, thought to have originated in Egypt or Asia Minor; and the third, found in the camp of the Sixth Roman Legion in Tel Shalem near Beit She’an, is on display at the Israel Museum’s permanent exhibition.Ongoing at the Israel Museum, Jerusalem.For more info: www.imj.org.il 10. THEATER: ‘IOLANTHE’ FLUTTERS INTO JERUSALEM Encore! Educational Theatre Company’s latest production is Gilbert and Sullivan’s comic operetta Iolanthe. It tells the tale of a fairy (Iolanthe), who violates fairy law by marrying a mortal. Her son, Strephon, an Arcadian shepherd, is half-fairy, halfmortal, and keeps his origins a secret from his beloved Phyllis, a ward of the Court of Chancery. With a cast of 50, full orchestra and sumptuous sets and costumes, this is a musical treat for the whole family.Starts Wednesday and runs until January 7 at the Hirsch Theater in Jerusalem. For tickets: www.encore-etc.com.
Advertisement
Subscribe for our daily newsletter