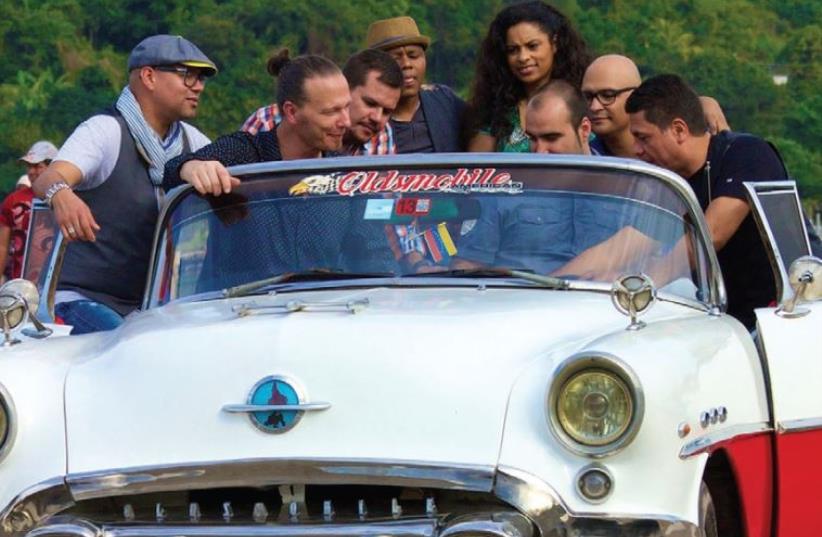 The Cabo Cuba Jazz band
(photo credit: PR)
Advertisement
1.LOVE LETTERS The film Love & Friendship, directed by Whit Stillman, is based on an early epistolary novella by Jane Austen called Lady Susan. Lady Susan Vernon, a less than grief-stricken widow, takes up temporary residence at her in-laws’ estate. While there, she is determined to be a matchmaker for her daughter Frederica – and herself as well. With Kate Beckinsale, Chloë Sevigny, Xavier Samuel.In movie theaters around the country. 2. THE IPO PRESENTS ‘FIDELIO’ The Israel Philharmonic Orchestra, conducted by Zubin Mehta, performs Beethoven’s opera Fidelio. With sopranos Ausrine Stundyte and Chen Reiss; tenors Burkhard Fritz, Felix Livshitz and Karl Michael Ebner; bass Wilhelm Schwinghammer; baritones Boaz Daniel and Noah Brieger; and The Gary Bertini Israeli Choir.July 16 at 9 p.m. at the Charles Bronfman Auditorium (Heichal Hatarbut), Tel Aviv; July 19 at 8 p.m. at the Haifa Auditorium. 3. FLIGHTS OF FANCY In The Flying Georgian, the Legacy dance company from the Caucasian republic of Georgia gives expression to the history and traditions of its homeland in a stunning performance. Georgian dance is characterized by complex movement by dancers who appear to “fly” on the stage. The performance features dozens of costumes in the richest traditions of the country.July 17 at 7 p.m. at the Performing Arts Center Beer Sheva, July 18 at 8 p.m. at the Performing Arts Center Ashdod, July 20 at 8 p.m at Heichal Hatarbut Karmiel, July 21 at 8 p.m. at Heichal Hatarbut Ma’alot.

4. STAMP OF APPROVAL Spanish dance company Lareal performs Estampas de Espana (Pictures of Spain), which comprises dance pieces from flamenco to classical Spanish dance, to traditional folklore and dance of the Spanish Royal courts in the 17 and 18th centuries.

July 19 at 8:30 p.m. the Tel Aviv Performing Arts Center; July 20 at 3:30 p.m. at the Karmiel Dance Festival; July 21 at 9 p.m. at the Herzliya Performing Arts Center; July 23 at 9 p.m. at the Jerusalem Theatre; and July 24 at 8:30 p.m. at the Haifa Auditorium. 5. FAIRYTALES ON SKATES The St. Petersburg State Ballet on Ice presents two programs – Cinderella and Swan Lake. A fusion of the art of ice skating and the art of classical ballet, the Los Angeles Times called their show “A dazzling combination of the enchanted fairytale ambiance, the airy tutu costumes and cascade of pirouettes and breathtaking leaps...Everything that happens on the stage expresses the successful merging of the classical ballet dancers and the Olympic ice skating champions.”The auditorium will be cool, so warm clothing is advised.

July 20 at the Jerusalem Theatre: ‘Cinderella on Ice’ at 5 p.m.; ‘Swan Lake on Ice’ at 8 p.m..6. COMPLEX MOVES The New York Dance Company Complexions will perform as part of the Tel Aviv Performing Arts Center’s Dance series. Founded in 1994 in New York as an outlet for extraordinary dancers of varied ethnicities and race, Complexions has raised the bar of contemporary ballet troupes by offering performances that both impress and connect with the audience. Here, they will present an evening of the company’s repertoire, choreographed by Dwight Rhoden, as well as a guest performance by local talent Ido Tadmor, who will reveal his newest work, H-A-I for Two, a solo danced to music by Max Richter.July 20, 21 and 23. For more information: www.israel-opera.co.il.7. CHICAGO BLUES Chicago-based blues singer Sharon Lewis will perform with the SOBO blues band at Mike’s Place clubs across the country. She is here as part of the Tel Aviv Blues Festival.Lewis is considered a “blood and guts” performing artist, with a captivating blend of hard-earned street cred and a smile tailored to melt the hardest of hearts.July 15 at 10 p.m. at Mike’s Place Tel Aviv. For the full schedule, go to http://www.mikesplacebars.com/. 8. THE CUBAN MAGIC The Cabo Cuba Jazz band is the next installment in the Hot Jazz series. The band’s topnotch musicians (singer Dina Medina; trumpet player Amik Guerra; percussionist Nils Fischer; bassist Yerman Aponte; keyboardist/composer/ arranger Carlos Matos; and singer/percussionist Armando Vidal) bring the best of the Creole and Caribbean vibe in an evening of passion and musical fire.July 16 at 9 p.m. at Ganei Tikva; July 19 at 10 p.m. at Zappa Herzliya; July 20 at 9 p.m. at Einan Hall in Modi’in; July 21 and 22 at 9 p.m. at the Tel Aviv Museum of Art; July 23 at 11 a.m. for a children’s show at Tel Aviv Museum of Art; and July 23 at 9 p.m. at Abba Hushi House in Haifa.9. THREE IS A COMPANY American jazz-rock guitarist/composer John Scofield and his trio – pianist Brad Mehldau and drummer Mark Guiliana – will perform here as part of their world tour.July 18 at the Shuni Amphitheater, near Zichron Ya’acov. Doors open 7:30 p.m. Show starts 9 p.m. For tickets and information: www.zappa-club.co.il.10. REVVING IT UP American rock band Mercury Rev will perform songs from their award-winning album Deserter’s Song, as well as many of their other hits.