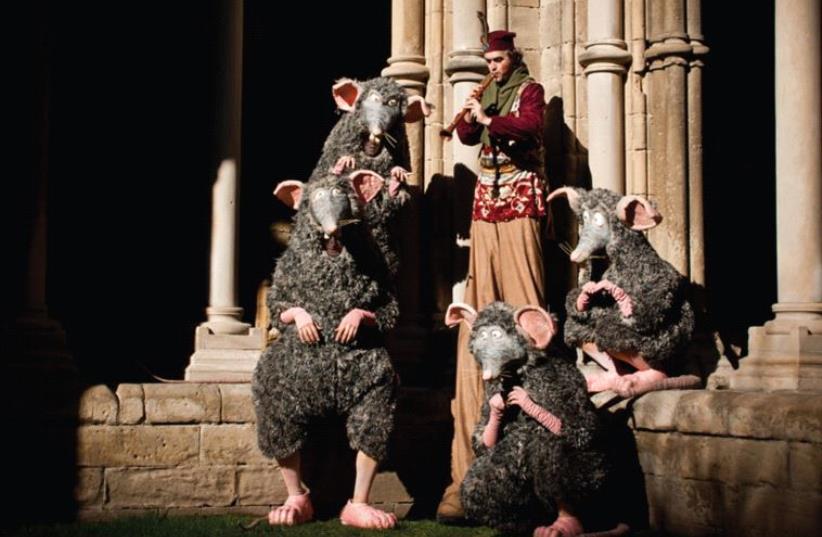 The Bat Yam International Festival of Street Theater and Art
(photo credit: PR)
Advertisement
1. HISTORY REVISITEDA remake of the epic 1959 film, Ben Hur is the story of Judah Ben-Hur, a prince falsely accused of treason by his adopted brother, an officer in the Roman army. After years at sea, Judah returns to his homeland to seek revenge but finds redemption. Directed by Timur Bekmambetov. With Jack Huston as Ben-Hur; Toby Kebbell as Messala; Rodrigo Santoro as Jesus; Israeli actress Ayelet Zurer as Ben Hur’s mother; Morgan Freeman as Sheik Ilderim.2. ROCK AND ROMANCE BY THE SEA Israeli singers/songwriters Shalom Hanoch and Aviv Geffen will each perform at Beit Gavriel by the Sea of Galilee in an evening of rock and romance for Tu Be’Av.

August 20 at 8:30 p.m. Doors open at 7 p.m. For reservations, call *9080 3. PAINTING WITH A PUNCHGraffiti artist JonOne (John Andrew Perello) returns to Israel with his art exhibition “Sitting on the Cloud.” Born in Harlem, JonOne started practicing graffiti at 17. After being discovered, he moved to Paris, where he lives and works. There is an urgency to JonOne’s work that harks back to his younger “vandal years” when he learned how to duck and dodge and deliver precise strikes into a punching bag. In his exhibition, the artist lays out his work and his inspiration, offering a “moment of lofty respite, bathed in the light of the Mediterranean.”Grand opening August 21 at 7 p.m. Gallery 32 at 32 Ahad Ha’am St., Tel Aviv. Closing September 30. gallery32tlv.com 4. ISRAELI SONGSThe annual Arad Festival of Israeli Music offers a host of free concerts over three packed days in the southern town. This year’s festival features concerts by performers such as Ethnix (pictured) (August 22 at 8 p.m.), Ricky Gal (August 24 at 8 p.m.), Matti Caspi and Ariel Zilber.For details, go to http://aradfestival.wixsite.com/20165. A NIGHT IN SEVILLEThe David Perez Troupe presents Estampa Sevilla as part of the Tel Aviv Dance Festival. Renowned flamenco dancer David Perez, with guitarist Manuel de la Luz and singer Javier Ribera, perform their Israeli debut, presenting the best of Seville’s authentic and innovative current flamenco. They will be joined by Israeli dancers Adi Davidovich and Micaela Harari.August 22 at 9 p.m. at the Suzanne Dellal Center, Tel Aviv

6. SOUNDS AND SCENESIconic Israeli crooners Matti Caspi and Shlomo Gronich bring back their classic act “Behind the Sounds,” performing songs they wrote together and duet renditions of songs each of them wrote. The concert will be accompanied by video art created by David Rambi.August 23 at 9:30 p.m. as part of the The End of Summer festival (August 23-25) on the plaza of the Jerusalem Theatre 7. STREET FUN The Bat Yam International Festival of Street Theater and Art offers three days of colorful, breathtaking performances. Top international performers include Plasticiens Volants from France with their giant flying fish; world-renowned Spanish clown Leandre with his show Iceberg; Circ Panic from China with amazing poles; and Campi Qui Pugui Productions from Italy. There will also be dozens of local artists and theater performers. All performances are free of charge August 24 and 25 from 7:30 p.m. to 11 p.m.; August 27 from 8:30 p.m. to midnight. Bat Yam Promenade. For details: http://batyamfest.co.il.

8. FROM GREECE WITH PASSION Prominent Greek singers Antonis Remos and Melina Aslanidou perform an evening of Mediterranean music.Remos is known for his romantic singing, and Aslanidou is famous for her rich repertoire which includes ethnic music, pop, folk and movie hits.

August 25 at 8:30 p.m., Charles Bronfman Auditorium, Tel Aviv. For tickets, call *9066.9. CATCH THE RIFFCharismatic Israeli-French singer/songwriter Riff Cohen joins forces with the Jerusalem Andalusian Orchestra conducted by Tom Cohen, performing a concert as part of the End of Summer festival. Joining them are singer and Indian music master Shai Ben-Tzur and video artists Yair Moss and Daniel Zini.August 25 at 9:30 p.m. on the plaza of the Jerusalem Theatre10. THREE DECADES OF JAZZ Marking 30 years of acclaimed musical achievements, the international Red Sea Jazz Festival in Eilat is hosting a special tribute to Israeli jazz, with 30 productions featuring the intricate tapestry of homegrown jazz. The musical collage includes successful Israeli jazz artists on the local and international jazz scene, pioneering founders and rising stars. Special guest of the festival is the Chick Corea Trio.