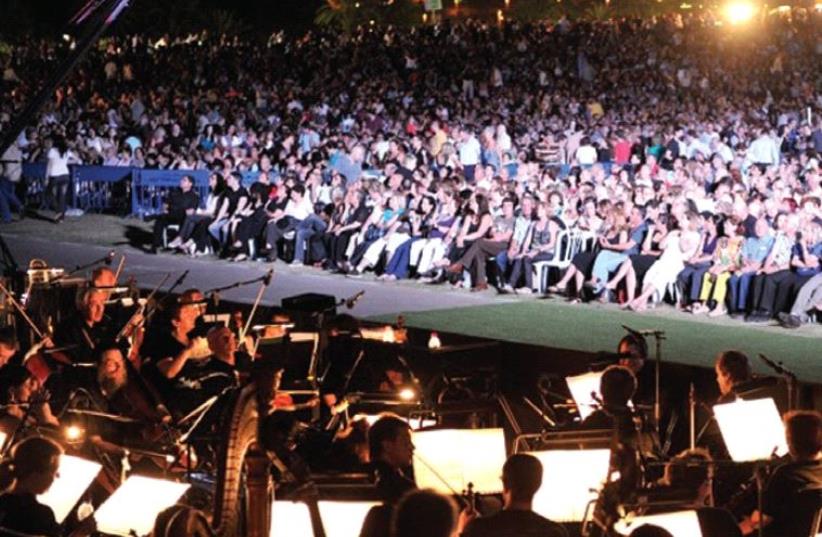 One of the Israel Opera's free open-air concerts
(photo credit: YOSSI ZWECKER)
Advertisement
1. A SULLIED REPUTATION?The film Sully, directed by Clint Eastwood, is a salute to professionalism. On January 15, 2009, the world witnessed the “Miracle on the Hudson” when Captain “Sully” Sullenberger glided his disabled plane onto the frigid waters of the Hudson River, saving the lives of all 155 passengers aboard. However, even as Sully was being heralded by the public and the media for his unprecedented feat of aviation skill, an investigation was unfolding that threatened to destroy his reputation anad his career. With Tom Hanks.
2. BRIDGET JONES PLUS ONEIn the film Bridget Jones’s Baby, we see that after breaking up with Mark Darcy, Bridget Jones’s “happily ever after” hasn’t quite gone according to plan. Fortysomething and single, she decides to focus on her job as a top news producer and surround herself with friends old and new. For once, the British Bridget has everything under control. What could possibly go wrong? Then her love life takes a turn, and she meets a dashing American named Jack, the suitor who is everything Mr. Darcy is not. In an unlikely twist, she finds herself pregnant but with one hitch – she can only be 50 percent sure of the identity of her baby’s father. With Renee Zellweger, Colin Firth, Patrick Dempsey.Starts September 15 in movie theaters nationwide.
3. THE GLORY OF THE MOMENTMan of the Hour, the acclaimed work by choreographer Itzik Galili, is an opus in which the individuals search for the glory of the moment and for a fragment of memory that will create a personal and national identity in an ongoing journey from an agonizing cry to peaceful serenity. The work is a co-production of the Israeli Opera, the Suzanne Dellal Center and the Festival of the Netherlands.September 12 and 13 at 9 p.m., Suzanne Dellal Center, Tel Aviv
4. BETWEEN MACRO AND MICRO The essential theme in Avi Kaiser and Sergio Antonino’s dance piece Glocal Bach is the sense of the place as a physical element that creates dance language. Glocal Bach attempts to put the accent on the “territory’’ between the macro and the micro, the global and the local with a moving body, focusing on the relationship between details and complexity, developing a language inspired by the perfect mathematical structure of Bach’s music.September 15 at 9 p.m.; September 16 at 2 p.m. Suzanne Dellal Center, Tel Aviv
5. TWO PIANOS AND AN OUD Octopus – the Israel Pianists Quartet, together with veteran oud player Taiseer Elias, present the world premiere of Metamorphosis, a new piece by Israeli composer Zvi Avni. The program also features Brahms’s Serenade No. 2, with actor Alex Ansky reading the composer’s letters; Bach’s Toccata and Fugue; and Liszt’s Hungarian Rhapsody.

September 10 at 8:30 p.m., Tel Aviv Museum of Art, Recanati Hall
6. SUPPORT FOR THE DEAD SEA Five years after his mass art installation at the Dead Sea, international artist Spencer Tunick returns to Israel in an effort to call for the rescue of the Dead Sea. Tunick will visit the Dead Sea’s Mineral Beach, the site of his previous installation, hold a press conference, and display a selection of his works in Tel Aviv.Opening of the exhibition September 13 at 7:30 p.m. Closing September 28. Reviat Florentin Gallery, 3 Hamaon St., Tel Aviv. (03) 628-5300. Free entrance.
7. MUSIC AT MASADAAt this year’s Faza Morgana in the Desert, the focus is on music at Isrotel’s annual festival at the foot of Masada. In the lineup, Machina hosts Yehudit Ravitz (September 15); Gil Shohat and his 7 Pianos (September 16); and Shlomo Artzi with his new performance “Kazefet” on the last night (September 17).For reservations, call *5585.
8. RAISING FUNDS FOR THE WOUNDED Singer/songwriter Shlomi Shabbat, together with comedian Shalom Asayag, will perform at Hadassah Israel’s annual gala evening, to raise funds to build a rehabilitation center for wounded soldiers and terror victims in the rehabilitation wing of the Hadassah Medical Center.

September 14 at 8:30 p.m., Culture Palace, Tel Aviv. For tickets, call (02) 677-9406.
9. ‘MADAME BUTTERFLY’ IN THE PARKThe Israeli Opera renews its free open-air concerts next week with a production of Puccini’s beloved opera Madame Butterfly. Hosted by Tel Aviv Mayor Ron Huldai, the production is a cooperation between the Israeli Opera and the Tel Aviv Municipality. Get there early if you want to find a good spot.September 15. Gates open at 7 p.m., performance at 8:30 p.m. Free entrance.
10. IT’S ELECTRIFYINGElectronic music band Major Lazer will join Dutch DJ and musician Eva Simons, as well as local bands, at the Major Lazer Festival in Rishon Lezion. Major Lazer is here as part of a world tour promoting its new album Peace in the Mission.The band’s performances are known for the use of laser and lighting effects, as well as dancers and special stage sets.September 13, Amphitheater Live, Rishon Lezion. For tickets, call *8780 or *9964.
Advertisement
Subscribe for our daily newsletter